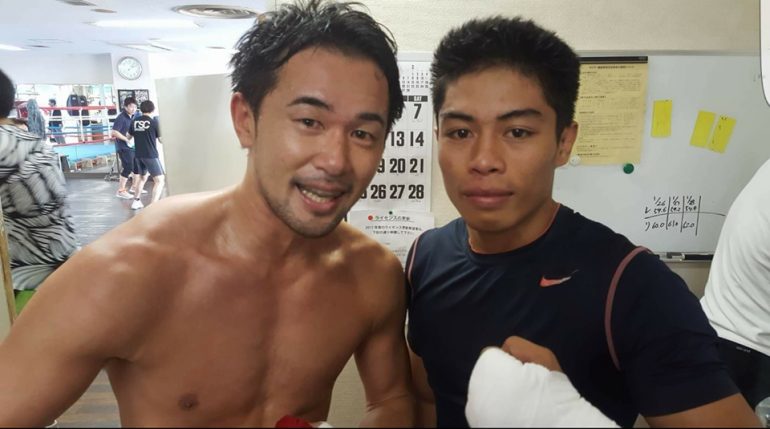 MANILA, Philippines – How do you compensate for a lack of amateur experience in a promising young fighter?

That’s the question promoter Jim Claude Manangquil was faced with when trying to move Reymart Gaballo, a heavy-handed but raw prospect from General Santos City, Philippines. Gaballo (16-0, 14 knockouts) had about 30 local amateur fights, learning how to box by hitting a sand-filled sack for a punching bag at his grandfather’s home in the mountains of Polomolok.

He turned pro three years ago, a decision Manangquil says he regrets sometimes as he tries to balance getting Gaballo in-ring experience while making sure he doesn’t bite off too much, too soon. Gaballo has shown serious one-punch power, particularly with his right hand, as he’s risen from flyweight to junior featherweight, but a gap remains between those opponents and someone with a real spoiler’s chance.

“I wish I had given him two more years in the amateurs for maturity. But some things happens for a reason,” said Manangquil, the 23-year-old son of well-to-do tuna scions in “GenSan.”

That’s why four days ago, Manangquil put Gaballo on a plane to Japan for a 24-day trip to spar with Shinsuke Yamanaka, the WBC bantamweight titleholder who is preparing for a March 2 title defense against Carlos Carlson. Yamanaka also brought in another Filipino boxer, Richard Pumicpic (18-8-2, 6 KOs), who is coming off a competitive loss against Cesar Juarez last October.

The sparring will give Gaballo an opportunity to gain some much-needed experience against the undefeated fighter who is rated No. 9 pound-for-pound by THE RING. So far Gaballo has sparred twice with Yamanaka, at four rounds each session, and tells RingTV, “I learned a lot just from a couple of sessions with Yamanka. I learned being careful and smart because he has a strong left hand. It also helps me with my confidence as I can go head to head with a great boxer.” (READ: The search for new boxing stars in ‘GenSan’)

This isn’t the first time Gaballo had been in the ring with an experienced fighter. When he was 17, Gaballo traveled five minutes from where he stays at the Sanman Gym to Manny Pacquiao’s gym to spar with Zou Shiming, the two-time Olympic gold medalist who was getting ready to fight Juan Tozcano in his third pro fight.

“Zou Shiming wasn’t sparring with anyone but Gaballo,” remembers Manangquil. Manangquil’s older brother John Ray had told Zou’s team that the still-amateur Gaballo was a pro fighting eight-rounders and it’d be no problem to go rounds with Zou. Gaballo says he sparred eight times at 4-6 rounds each and earned 1,000 pesos (about $20 USD) for each session.

Last year, Gaballo spent three weeks in camp with current WBO junior bantamweight champ Naoya Inoue before his fight with Karoon Jarupianlerd in September. It was an experience that shaped his opinion on the importance of defense.

“He always thought he could take all the punches, but when he got to Inoue he realized he had to change some stuff for when he meets these kinds of fighters,” said Manangquil.

Gaballo hasn’t gotten much attention outside of his corner of the Philippines but that may change soon. Manangquil says the plan is to have him rest for a week after returning from Japan and then relocate to Miami, Florida, to train with Osmiri “Moro” Fernandez. Gaballo already has his U.S. visa and will be advised by Ricardo Rizzo.

“We’re gonna announce something big when he gets there,” says Manangquil.

“Just because Gaballo hasn’t fought anyone doesn’t mean he is not the real deal. Gervonta Davis proved that two weeks ago. Gaballo could do the same.”

Petalcorin to face Florida on February 25

Randy Petalcorin, THE RING’s No. 7-rated junior flyweight, will face Mark Anthony Florida (9-6, 7 KOs) in an eight-round stay-busy fight at SM GenSan in General Santos City, says Manangquil, who also promotes Petalcorin. Manangquil says their target is to position themselves to challenge for the IBF 108-pound title, which is currently held by Akira Yaegashi. Yaegashi first must get past interim titleholder Milan Melindo.

Two other boxers from Manangquil’s gym are set for international dates as Adam Diu Abdulhamid (11-3, 4 KOs) battles Tim Hunt (20-4-1, 7 KOs) on April 21 at Malvern Town Hall in Australia. That show will be promoted by Peter Maniatis.

On another show, Romero Duno (12-1, 11 KOs) of Cotabato City, Philippines, will face Christian Gonzalez (16-0, 14 KOs) of Buena Park, California, on March 10 at Belasco Theatre in Los Angeles. Duno is currently training at the Wild Card Boxing Club with former WBC junior flyweight champ Rodel Mayol, who is also from the Philippines.