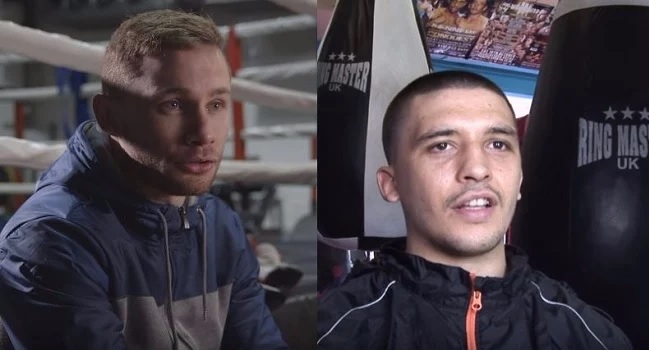 Over the years, many British and Irish fighters have fought in “Sin City,” with a wide array of contrasting results, some outstanding and some disappointing. Here we take a look at how British and Irish pugilists have performed in THE RING magazine/world title fights.

March 16, 1980 – Alan Minter SD 15 Vito Antuofermo, Caesars Palace: Minter won the WBA/WBC middleweight titles by the narrowest of margins in a fight many believed the Italian-born American resident deserved to win. It led to a rematch in the U.K. that Minter won inside the distance.

Aug. 13, 1983 – Milton McCrory SD 12 Colin Jones, Dunes Hotel: In their second meeting, McCrory dropped Jones in the opening round and took an early lead before holding off the valiant Welshman’s late relay to claim the vacant WBC welterweight crown.

June 23, 1986 – Steve Cruz UD 15 Barry McGuigan, Caesars Palace: The hugely popular McGuigan – a 5-to-1 favorite – wilted in the 110 degree heat and dropped his WBA featherweight title in the process in THE RING magazine “Fight of the Year.”

Sept. 27, 1986 – Lloyd Honeyghan RTD 6 Donald Curry, Caesars Palace: Honeyghan ripped the IBF/WBA/WBC welterweight titles from Curry – who, at that time, was considered among the best pound-for-pound fighters in the world – in THE RING magazine “Upset of the Year.”

Feb. 4, 1989 – Marlon Starling TKO 9 Lloyd Honeyghan, Caesars Palace: Starling dominated Honeyghan to win the WBC welterweight title, dropping the Brit in the ninth round before finishing him off.

Feb. 25, 1989 – Mike Tyson TKO 5 Frank Bruno, Vegas Hilton: After a myriad of outside-the-ring issues that saw several postponements, Tyson retained his IBF/WBA/WBC heavyweight titles. He dropped Bruno in the opening round but was later shaken himself. “Iron Mike” regained his position and stop the plucky Bruno in the fifth.

May 8, 1993 – Lennox Lewis UD 12 Tony Tucker, Thomas & Mack Center: Riddick Bowe threw the WBC heavyweight title in the trash rather than face Lewis. Lewis was subsequently named champion; he dropped Tucker twice, while besting him over the distance.

Jan. 28, 1995 – Rafael Ruelas RTD 8 Billy Schwer, MGM Grand: Ruelas kept his IBF lightweight belt for the second time and set up a unification with one of the sport’s biggest stars, Oscar De La Hoya, by dicing up Schwer’s face, forcing the Brit to remain on his stool.

March 11, 1995 – Riddick Bowe KO 6 Herbie Hide, MGM Grand: Bowe, was too big (27 pound weight advantage) and skilled for the game but outlassed Brit, who was dropped seven-times, until he surrendered his WBO heavyweight title. 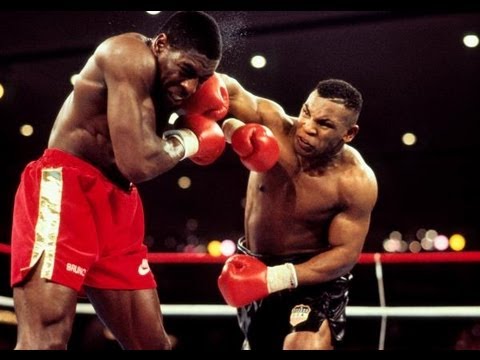 Nov. 9, 1996 – Henry Akinwande TKO 10 Alexander Zolkin, MGM Grand: Akinwande dropped Zolkin in the fourth round and then cut his Russian challenger, two rounds later, before winning on cuts to retain his WBO heavyweight title in the 10th round.

Nov. 17, 2001 – Lennox Lewis KO 4 Hasim Rahman, Mandalay Bay: Lewis gained a measure of revenge retaining his IBF and WBC heavyweight belts, knocking Rahman out cold in the fourth round to win THE RING magazine “Knockout of the Year.”

Dec. 11, 2004 – Vitali Klitschko TKO 8 Danny Williams, MGM Grand: Klitschko turned back the courageous effort of “Tyson Slayer” Danny Williams, breaking him down and stopping his challenger in eight rounds to retain his WBC heavyweight title for the first time.

July 16, 2005 – Oscar Larios RTD 10 Wayne McCullough, MGM Grand: Having given Larios a run for his money five months earlier, McCullough was rewarded with a rematch. However, “Pocket Rocket” was unable to wrest the WBC junior featherweight title from the Mexican and was saved from himself by the ringside physician at the conclusion of the 10th round. 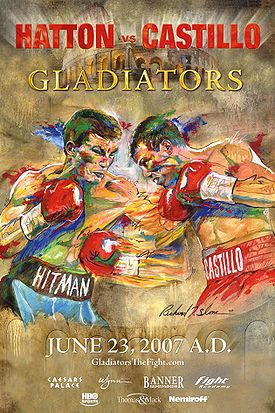 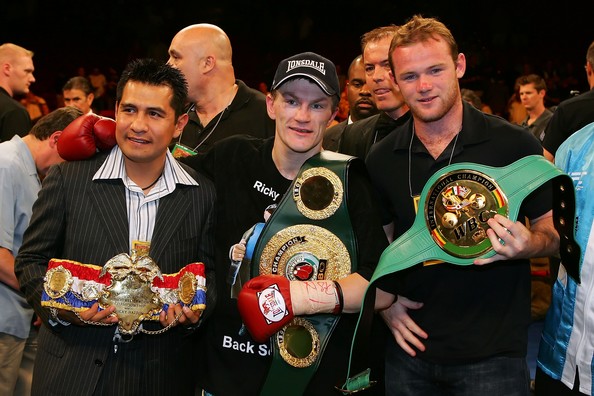 Dec. 8, 2007 – Floyd Mayweather TKO 10 Ricky Hatton, MGM Grand Garden Arena: Hatton stepped back up to welterweight, where he looked to emulate countrymen John H. Stracey (who stopped Jose Napoles) and Lloyd Honeyghan (who stopped Donald Curry), who, both underdogs, scored huge upsets to win honors at 147 pounds. In the end, in front of a star-studded crowd, Mayweather – the 2-to-1 favorite – picked Hatton apart, punctuating the victory with a 10-round stoppage.

Apr. 19, 2008 – Joe Calzaghe SD 12 Bernard Hopkins, MGM Grand: In Calzaghe’s first foray at light heavyweight, having previously held a portion of the super middleweight title for nearly 11 years, he recovered from a trip to the canvas in the first round to edge a close fight to win THE RING magazine championship. 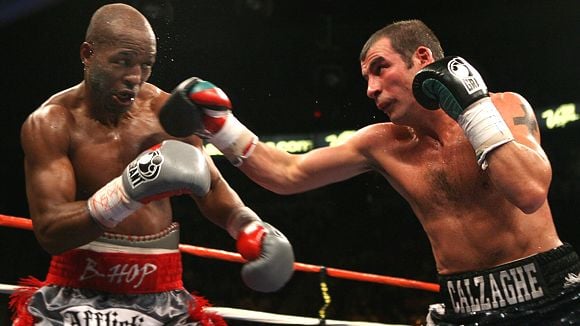 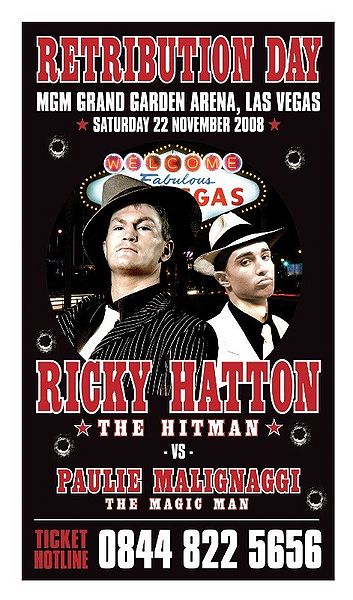 May 2, 2009 – Manny Pacquiao TKO 2 Ricky Hatton, MGM Grand Garden Arena: After a reportedly bad training camp, Hatton adopted a “Kill or be killed” mentality and went after the fleet-footed Pacquiao, who was too quick and picked Hatton off at ease, dropping him twice in the first round before ending matters in the second with a perfect left hook to claim THE RING junior welterweight championship. 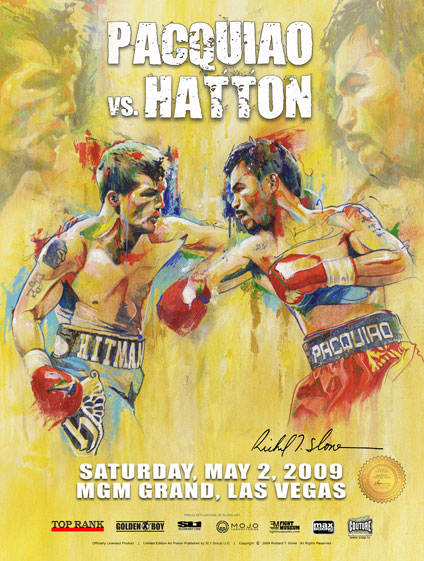 Dec. 11, 2010 – Amir Khan UD 12 Marcos Maidana, Mandalay Bay: Khan dropped Maidana in the first round with a vicious body shot before the proud Argentinean roared back and gave Khan hell. It wasn’t enough; Khan was given the nod and retained his WBA strap, by narrow but unanimous decision.

July 14, 2012 – Danny Garcia TKO 4 Amir Khan, Mandalay Bay: Several months after controversially losing to Lamont Peterson, Khan resurfaced against WBC junior welterweight titlist Garcia; Khan was given back his WBA kingmanship days before, due to the previously controversy. After a good start, Khan was caught by a devastating left hook late in the third round that sent him to the canvas. He was down again in the fourth and unable to recover. Referee Kenny Bayless called the bout to a close. 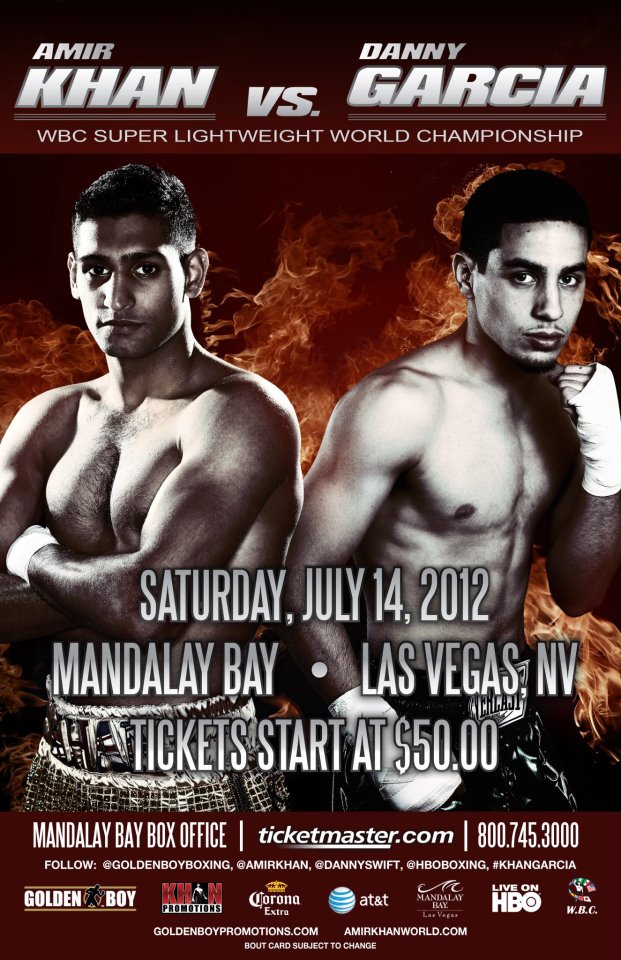 Dec. 13, 2014 – Andy Lee TKO 6 Matt Korobov, The Cosmopolitan: Lee and Korobov met for the vacant WBO middleweight title; the Irishman was getting a boxing lesson until he turned the fight on its head in the sixth round with a Hail Mary of a right hand.

May 7, 2016 – Canelo Alvarez KO 6 Amir Khan, T-Mobile Arena: Khan made the bold move to step up to face WBC middleweight titlist Canelo at a catchweight. Despite a solid, early start, the Mexican’s greater firepower finally told in cataclysmic fashion late in the sixth round when Khan was nailed and knocked out cold by a howitzer of a overhand right.

Marco Antonio Barrera-Naseem Hamed: Although it was widely recognized as being for featherweight supremacy, none of the main titles were up for grabs and it was before THE RING re-established it’s championship policy.

Javier Fortuna-Patrick Hyland was for the WBA interim title and not recognized. Neither of Amir Khan’s fights against Luis Collazo or Devon Alexander were for world titles.

All told, since 1980, British and Irish fighters have fought 34 world title bouts in Las Vegas, going 17-17 in that time.

Lennox Lewis is the most successful Brit/Irishman to have fought in Las Vegas, going 5-0.

We didn’t include Milton McCrory-Colin Jones I because it took place in Reno, Lennox Lewis-Henry Akinwande, which found a home in Stateline or Virgil Hill-Crawford Ashley, who met in Primm.

At Saturday’s venue, British and Irish fighters are a disappointing 3-8 in world title fights.