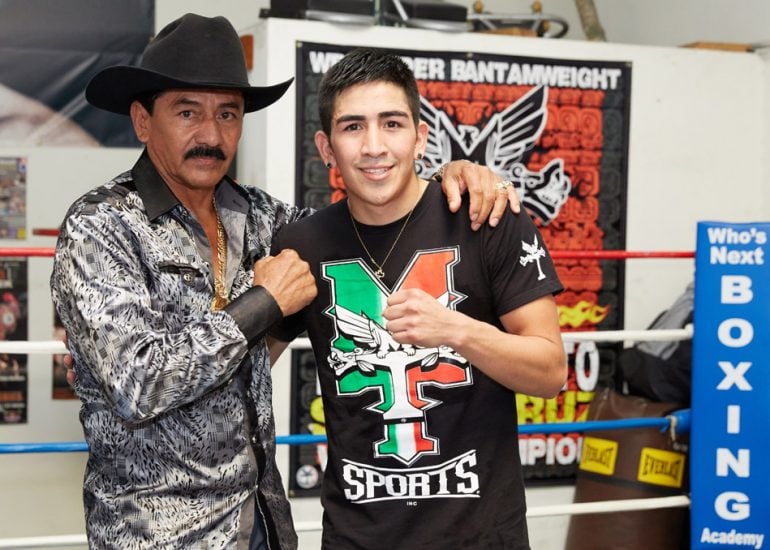 Leo Santa Cruz suggested he was hamstrung in his first fight with Carl Frampton because of differing game plans implemented by his older brother and dad, who was battling cancer and missed most of the first camp.

Now that father and trainer Jose Santa Cruz has recovered and his cancer is in remission, he is working diligently with his son to craft a better blueprint for the featherweight title rematch, which Frampton (23-0, 14 knockouts) won the first time back in July by a majority decision to claim the WBA title. The two will do it again on Saturday at the MGM Grand on Showtime.

“In the first camp, I didn’t have my dad with me,” Santa Cruz said on a conference call last week. “And me and my brother were doing something that we thought was going to be a good game plan. But, you know, my dad is smart when it comes to that. Since my dad wasn’t there, we didn’t come with a big game plan. We had trained (for) one thing with my brother, and then when my dad got there, he wanted us to train in a different way. So we got confused. We got a little bit frustrated. This time, we’re going to go perfectly fine and we’re not going to have any problems.”

Santa Cruz, a former three-division champion, admitted he was consumed with anxiety during the first fight because of his dad’s ongoing treatment for Stage 3 myeloma, a spinal bone cancer which entailed chemotherapy and surgery. “In the first camp, I was worrying more about him, about his health, how he was doing, if he was going to be able to go to the fight with me,” he said of his dad, who was able to work his corner. “Or if he was even going to wake up the day after tomorrow, to be there with us because cancer is a very dangerous disease that you could be here with us today — or tomorrow you won’t be here with us.”

Santa Cruz (32-1-1, 18 KOs) said he and his dad were working on “what punches I have to throw” against Frampton and specific strategies that have given him confidence heading into the rematch. “He pushes me,” he said, “and gives me that extra motivation.”