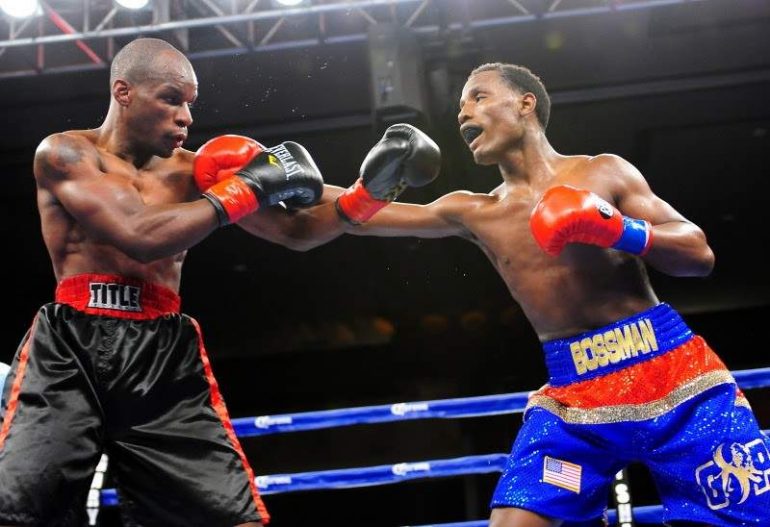 Best night of pro career: After 10 fights, Sims feels he’s now adapted to the rigors of the pro game and is most pleased with his shutout decision in his most recent fight.

“My last fight, when I fought against Jonathan Dinong,” Sims told RingTV.com. “It was supposed to be my first slight step-up fight. That was my first fight I felt really comfortable with the smaller gloves, the lights and the crowd. That was the fight I felt it all coming together.”

Worst night of pro career: Having initially turned pro at lightweight, Sims struggled to boil his large 5-foot-10 frame down to make 135. That played a part in a less-than-stellar outing when he fought Francisco Jaile Lopez in November of 2014.

It will be Sims’ first eight-rounder and only his second appearance on TV. He appears to be in a confident mood, despite having limited knowledge of his opponent.

“I don’t know too much about him,” he said. “I’ve seen him on TV before my fight when I fought on CBS in September. He fought on the same network the week before me. That’s his only loss (a split decision to Steve Claggett). I’ve seen him fight on TV, two or three times; he’s a pretty good fighter. I just think I have all the tools to take care of it.”

Robles, 28, hails from San Diego and has been a pro since 2010. The skilled southpaw boasts a pro win over talented 2008 Cuban Olympic bronze medalist Yordenis Ugas.

Why he’s a prospect: Sims came to the pros after a stellar amateur career. He twice won the PAL (Police Athletic League) Championships, winning his first title at just 16. He was only allowed to compete because it was an Olympic year. He was also a three-time Ringside champion.

He fought at the 2012 Olympic Trials, losing to eventual representative Jose Ramirez by one point.

After failing to make the Olympics, Sims stuck with the amateur code and excelled in 2013, winning the Silver Gloves, bronze at the Junior Olympics, silver at the Independence Cup and represented the U.S. at the World Championships in Almaty, Kazakhstan, losing in the second round to future Olympic Gold medalist Fazliddin Gaibnazarov.

Sims returned home and had a big decision to make.

In his amateur days, besides Ramirez and Gaibnazarov, he fought many other top fighters including Erick De Leon, Saul Rodriguez, Toka Kahn-Clary, Kevin Rivers and Lamont Roach.

Looking back, Sims is unsure of his amateur record.

Since making the transitions he has sparred with many top names, none bigger than Manny Pacquiao, who he helped prepare for Floyd Mayweather Jr. in May of 2015.

Sims was in camp with Pacquiao for around five-to-six weeks and estimates he sparred 40 rounds with the Filipino legend. It was a terrific experience for the youngster.

“Pacquiao and (Pacquiao’s trainer) Freddie Roach both told me I was his best sparring partner for the camp,” he said proudly. “It gave me a boost in confidence.”

He has been in camp with Andre Berto, who he also helped prepare for Mayweather. Other standouts with whom he’s sparred include unified THE RING magazine/WBC/WBO junior welterweight champion Terence Crawford, former IBF junior middleweight beltholder Carlos Molina and current RING/WBA lightweight champion Jorge Linares.

Sims feels he has three key attributes inside the ring: “My jab, my mind and I think my biggest is my footwork.”

Why he’s a suspect: At this point, it’s hard to find a round “Bossman” has lost out of the 44 pro rounds he’s contested. However, he also only has a 30 percent KO ratio. Clearly, while having decent power, Sims doesn’t have fight-ending power.

“Right now, I’ve only got three knockouts, so I need to boost that up some.” he admitted.

As well as power, he feels experience is something he needs to improve.

“Just experience,” he said. “I think I’m as talented as anyone in the world when it comes to skills. I just need to get the experience, get the rounds and fighting in front of big crowds. Other than that, I need experience you get in fights. I’ll constantly improve just based on experience.”

After appearing on the Wladimir Klitschko-Bryant Jennings heavyweight title undercard at Madison Square Garden in April of 2015, he sat on the sidelines for 11 months. After he resurfaced, he was, again, inactive for six months.

“It was contractual problems,” he said of those issues. “I got out of the contract and back to fighting.”

Thankfully, after just one fight in 18 months, Sims fought three times in the final quarter of 2016, and fights Friday, so his inactivity looks to be behind him.

Story lines: Sims grew up in the southside of Chicago in a tough neighborhood. He had a tight-knit family to help him keep away from the many pitfalls.

“I had a strong support system from my family,” he explained. “My mom, dad and my dad’s best friends, they would help me get to different tournaments out of town. If my parents couldn’t afford it, they’d get me equipment. I feel my family is a big part of everything I do.”

Interestingly, boxing wasn’t his first love. In fact, he actively disliked it initially.

“I hated boxing when I first started,” he said laughing. “I wouldn’t do it at all. My dad had come to my school one day and peeked into my class and saw I was one of the smallest guys in there. He made me (take up boxing). He was working, so he would make my mom take me to practice and sometimes I would ask if she could take me to the park instead of the gym and she would say, ‘No because I’m not about to be arguing with your dad.'”

His father told him that when he became good at boxing, he could quit if he liked. It took around a year but when he won his first trophy, he fell in love with the sport.

Growing up, Sims was good friends with the recently deceased Ed Brown. The two were close and used to stay at each other’s homes and travel to amateur tournaments together.

Blood really wouldn't have mad us closer. Been with you since I was 8 and now you gone. I love you big bro. #RIP pic.twitter.com/uiGt7VVSip

Both men fought for the first and only time on the same card in their most recent fights before Brown’s passing, of which Sims simply says, “I’m happy we got to fight together before it happened.”

Sims says he will be dedicating the Robles fight to the memory of his friend.

His boxing hero is IBF/WBA/WBO light heavyweight titleholder Andre Ward and Shakur Stevenson, who he says is like his little brother.

Away from boxing, Sims is a keen basketball player and plays at least three times a week. When he’s not actively throwing hoops, he can be found at home with friends and family and likes to play NBA 2K17 on PlayStation with his friends. He has a weakness for shoes and owns in the region of 80 pairs.