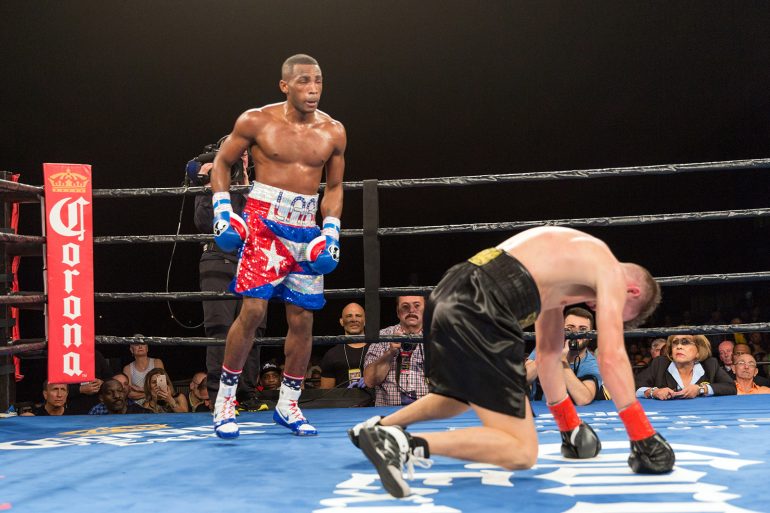 Photo by Ryan Hafey / PBC
14
Jan
by The Ring

Erislandy Lara defended his WBA 154-pound title with a fourth-round knockout of former beltholder Yuri Foreman in the main event of Premier Boxing Champions on Spike Friday night at Hialeah Park Racing and Casino in Miami.

In front of an audience filled with fellow Cuban natives, Lara (24-2-2, 14 knockouts) needed just a single left uppercut to drop and stop Foreman at 1:47 of Round 4. Foreman (34-3, 10 KOs) was also down in round three from a questionable knockdown that could have been ruled a slip.

“I’m very happy with my performance tonight,” Lara said. “He was a little bit awkward, so I had to make some adjustments and we got him out of there.

“I’m ready to fight the best in the world, Golovkin, Canelo… whoever is willing to step in the ring with me, I’m willing to fight.”

Dirrell had too much for the brave Hungarian, as he hurt him with virtually every landed punch, especially to the body. Nemesapati tried to make a fight of it, but was in over his head against the world-class skills of Dirrell.

Nemesapati elected to stay on his stool and not come out for round seven. The official result is a TKO 6 (2:59) for Dirrell.

Former bantamweight titleholder Juan Carlos Payano (18-1, 9 KOs) had too much for determined Mexican opponent Isao Gonzalo Carranza of Mexico City (15-8-1, 8 KOs), stopping him at 1:16 of round seven.

Payano moved in and out brilliantly, befuddling Carranza with his athleticism. Referee James Warring had finally seen enough and waved a halt to the bout with Carranza still on his feet.