Loeffler unsure if Donald Trump will attend GGG vs. Jacobs 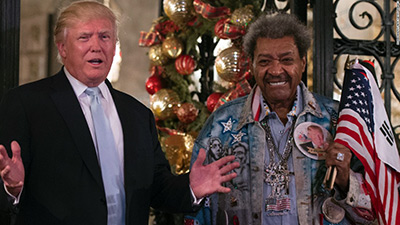 Promoter Tom Loeffler is unsure if President-elect Donald Trump will attend Gennady Golovkin’s middleweight showdown with Daniel Jacobs on March 18 at Madison Square Garden on HBO PPV ($54.95) as he has on two prior occasions.

Trump, a casino magnate who hosted a number of Mike Tyson’s early fights, attended Golovkin’s eighth-round beatdown of David Lemieux in October of 2015, meeting with him in his dressing room to wish him luck before the bout; Trump was also ringside for Golovkin’s third-round stoppage of Daniel Geale in 2014, also at the Garden.

“Trump came to his last two fights here at Madison Square Garden, the main arena,” Loeffler said on Tuesday before a press conference for the March 18 bout. “There’s no telling now that he’s president of the United States, president elect, whether he will come (this time). But he’s a boxing fan and he seems to appreciate Gennady’s talents in the ring and he came to the last two fights. But we haven’t had any word if (he will come on March 18). It might be the first time an acting or sitting president would be to a championship boxing match, at least in recent memory (if he did attend).”

Trump was savagely booed when he traversed a Garden walkway inside the arena before he faced Lemieux. He also received catcalls when he was shown commiserating with Golovkin in his dressing room on the video board above the ring. On Tuesday, Golovkin wouldn’t touch the subject of Trump, saying it’s not his role to discuss politics.

“I’m a boxer, not political,” Golovkin said in response to a question of whether Trump is a good-luck charm for him at his fights. “I have respect for him because he is the president of the United States. He loves sports. There’s respect with him because it’s a sport.” Loeffler followed up by saying the meeting in his dressing room was a brief encounter with little civic significance other than for Trump to express his admiration for Golovkin as a boxer.

“He just came to wish him good luck, that’s really all it was,” Loeffler said. “That’s really all the interaction was. They were preparing for the fight. Like Gennady said, he’s not political. He’s a citizen of Kazakhstan and he’s a world champion boxer who wants to display his talents in the ring.”