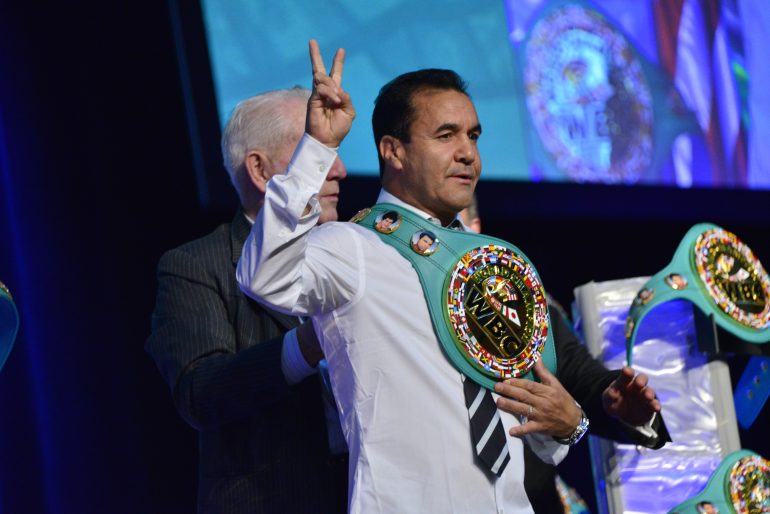 Jeff Fenech is considered one of – if not the – greatest boxers ever produced by Australia.

At his brilliant best, he was a whirling dervish of a fighter, winning major titles at 118, 122 and 126 pounds in the 1980s and only controversially missing out on a hugely significant fourth crown at 130.

Fenech was a good amateur, winning bronze at the 1983 Commonwealth Games. The following year, he lost in the quarterfinals at the Olympics in Los Angeles to eventual junior flyweight silver medalist Redzep Redzepovski. Later that year, he made the logical step into the pros.

“The Marrickville Mauler” quickly made his mark, winning the National junior bantamweight title in just his third outing and, by his seventh bout – just six months into his career – his backers were able to tempt WBA bantamweight titlist Satoshi Shingaki to make the trip to Australia.

Shingaki was no match for Fenech, who demolished the Japanese beltholder in nine rounds. As well as winning his first world title, he also became the first boxer from the 1984 Olympics to win pro honors.

In December of 1985, Fenech took American Jerome Coffee’s unbeaten record in another title defense, going the full 15-round course. He then outpointed future Hall-of-Famer Daniel Zaragoza, four months later in a non-title outing. In the summer of 1986, Fenech handed 1984 Olympic flyweight champion Steve McCrory his first defeat by 14th round stoppage.

By this time, Fenech was suffering from chronic hand issues that sidelined him for nine months. He quickly found his groove and, one month after winning the Australian featherweight title, Fenech won the WBC junior featherweight title with a fourth round bludgeoning of Samart Payakaroon. The beating was so severe, the Thai retired to live in a monastery in his homeland.

Fenech successfully turned back the challenges of Greg Richardson (KO 5) and Mexican legend Carlos Zarate (by fourth round technical decision) before migrating to featherweight, where he collected the vacant WBC strap with a hard fought 10th-round stoppage of heavy-handed Victor Callejas. Impressively, his third world title in consecutive weights came in the space of just three years.

Looking back, Fenech says both the Callejas and Payakaroon victories were his best wins.

“In my third title fight, against Victor Callejas, I fought at 80 percent. I had a broken right hand. That was a great performance,” Fenech told RingTV.com, “but I think my best was when I won my second world title against Samart Payakaroon. I think I boxed brilliant. I knocked him out with a great punch. The great thing was, though my hands were sore, I hit him early and there was a couple times he hit me and – wow, could he punch. I wanted to get him out of there as quick as I could.”

Fenech made three successful title defenses before besting rugged Mexican Mario Martinez at 130 pounds. Further hand trouble forced Fenech to retire from the sport. However, just over a year-and-change later, he returned. After a comeback win, he made his American debut against the legendary Azumah Nelson.

“If you watched from my first fight to my 28th with Nelson, I may have lost three rounds.” Fenech said reflecting on his career.

After 12 rounds, the consensus was that Fenech had done enough to unseat the “Professor.” However, the bout was declared a draw, much to Fenech’s dismay.

“I honestly believe, in my first fight with Nelson, I did what I did with every other fighter,” explained Fenech. “Of course, Azumah was a little better. I knew that, was prepared for that. I did what I did to most other opponents.

“He fought a little harder and he was a much, much better conditioned guy than any of the rest I fought because most of them faded as the rounds went on. Azumah faded but I think his corner did a great job when they hid the mouth guard. Him being Azumah Nelson and being under the Don King banner helped him because I believe the referee (Joe Cortes) didn’t let me do what I wanted to do, breaking up the fight, let Azumah hit me after the bell. People want to say I’m a dirty fighter but I only retaliate when someone does something to me. I’ve got no need to do something dirty at the start because I’m busy trying to cut the ring off and put pressure on. Like I said, although I won the fight, nobody tried to help me like that. The judging, the referring, everything was against me.”

Although Fenech secured a rematch with Nelson, he had to wait nine months. In March of ‘92, Nelson traveled to Australia, where a crowd of 35,000 turned up in expectation of watching their hero’s coronation. However, not for the first time, the brilliant Nelson turned the tables on the oddsmakers, stopping Fenech in the eighth round. Nelson’s win was voted THE RING magazine “Upset of the Year.”

“He fought a great fight,” acknowledged Fenech. “I’d never been hurt before in my life before the rematch. In the first fight, Azumah never hurt me a bit. Callejas, Samart Payakaroon hit me with a good punch; none of them slightly hurt me.

“After that fight, I went home and I was never the same. He could say he fought and beat Jeff Fenech but that wasn’t the Jeff Fenech that fought Victor Callejas. The Jeff Fenech that fought (Nelson) in the Mirage, I’d been sick for weeks here in Las Vegas. I never made excuses; I never would but I’m just saying, if he fought me at the time I fought (Marcos) Villasana, Callejas, I would have stopped him no problem and it was 15 rounds in those days. In the 12th round, he couldn’t stand up; I had to hold him up in the fight.

“It’s all history. I didn’t get (the decision). He comes to Australia and knocks me out. It just speaks volumes for the man’s character, tenacity and everything else he’s got. He’s one of the greatest in history for (winning rematches).”

Fenech fought sparingly over the next couple of years and was able to tempt IBF lightweight boss Philip Holiday to travel from South Africa and put his title on the line in May of ’96. Fenech was stopped in the second round and walked away from boxing.

After 12 years, with both men shadows of their former selves, Fenech met Nelson in a rubber match. Fenech was able to exercise a few demons by winning a majority decision.

One of Fenech’s wishes was that he would have liked more people in America to have seen him fight.

“That’s one of the things that’s upsetting in my career; people in America didn’t see my fights,” he said “If they saw me against Marcos Villasana or a guy who was world champion and me beat him every round.

Fenech considers his third world title as his greatest achievement, “People don’t realize, had I won that fourth world title (vs. Azumah Nelson), I’d have been the first boxer in history to win four world titles (at different weight classes) undefeated.”

Unsurprisingly, the biggest disappointment of Fenech’s career was not being able to do just that.

“My fourth title,” explained Fenech, who retired with a mark of 29-3-1 (21 knockouts). “That’s why I made those stupid comebacks but I’m a realist. Once I started to get hurt, it was never the same again.

Fenech entered the International Boxing Hall of Fame in 2002.

Fenech, now 52, is still involved in boxing as a trainer. He has previously worked with Mike Tyson and several prominent Australian fighters including Danny Green, Daniel Geale and Vic Darchinyan.

Away from boxing, Fenech is married to Suzee and has three children. He enjoys traveling, owns several businesses, including his own mine.

He kindly agreed to speak to RingTV.com about the best he faced in 10 key categories.

BEST JAB
Jerome Coffee: Had a great jab. He was a typical boxer, a guy who really relied on his jab.

BEST DEFENSE
Georgie Navarro: He had a great eye but he’d never been pressured like I pressured him, he’d never been hit that many times and after a couple of rounds he didn’t want to do it anymore. Early he was defensively brilliant.

FASTEST HANDS
Steve McCrory: Steve was quick, he was a good Olympian.

FASTEST FEET
Greg Richardson: He squirmed and ran everywhere. I caught him a few rounds in.

SMARTEST
Azumah Nelson: Everybody in the beginning then, I made them fight my fight. Daniel Zaragoza was clever. His ring experience, he was tough. I’d say Azumah Nelson. I think Azumah was smart; he’s a thinker.

STRONGEST
Mario Martinez: Villasana was tough; Mario Martinez, he was bigger. The Mexicans have always been the toughest to hurt and they’re conditioned to getting hit. These other guys, after they get hit for four or five rounds, they wanted to quit. Richardson, Navarro and others, I could see in their eyes they wanted to quit. The Mexicans, they’ll absorb a lot of punishment and keep fighting, the Mexican spirit.

BEST PUNCHER
Victor Callejas: Without any doubt, Victor Callejas. Wow, he could punch hard. Also, Samart Payakaroon, he knocked out Lupe Pintor, Juan Meza; he knocked out everyone. Victor Callejas, he punched hard, those short, sharp punches. I’ll always remember when hit me with the same punch, a left uppercut. He hit another guy, Loris Stecca, with it, lifted him off the floor like a rocket and he fell backwards. It was amazing.

BEST OVERALL
Nelson: I’d have to say Azumah. His record speaks for itself. He’s amazing because someone could beat him one day and usually that would break another fighter’s heart. He’d go home, do his homework and come back and beat them. That separates a guy; that’s an amazing thing.