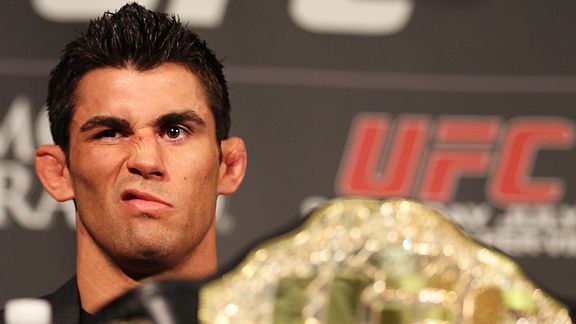 Dominick Cruz has gone from being a forgotten fighter due to hard-luck injuries to what many MMA journalists consider to the greatest bantamweight of all time in only a year’s time.

In just 11 months Cruz has gone from being on the shelf (and only fighting once in three years) to regaining his belt in January with a razor-thin victory over T.J. Dillashaw to preparing to for his third title fight at UFC 207 where he’ll defend the belt against upstart Cody Garbrandt. Since the fight was announced last month, tensions have run high between the fighters in the build up tonight’s co-main event showdown at T-Mobile Arena.

“He’s been hot at me since day one and I don’t know where that comes from other than I beat a lot of his teammates and used the money from those wins to build me a house,” Cruz said in an exclusive interview with Ring TV.com. “Right after I fought Faber, he met me in the back and began running his mouth begging for a title shot, and I’m granting his wish and will give him a butt whopping.”

Many MMA experts were surprised Garbrandt got a title shot after Cruz’s close decision victory over Dillashaw. With the challenger’s undefeated record and three-fight knockout streak, it is easy to say the general public picked Garbrandt for Cruz’s next opponent as he enters his ninth WEC/UFC title fight.

“This is a business. I don’t pick the fights, I just fight them and this is all about giving the fans mouthwatering matchups they want to see,” Cruz said. “Typically, rematches don’t do that, and I know T.J. isn’t going anywhere. Cody’s been asking for this for a long time and has been very adamant by running his mouth and begging for it, so it just made sense since he’s undefeated and all.”

Cruz’s title fight with Garbrandt will be a clash of styles, as Garbrandt is the consensus choice for heaviest hitter in the division. Cruz is noted as having the best footwork in the UFC as evidenced by the fact he’s statistically the hardest fighter to hit.

The bantamweight king ducks and dodges opponents’ attacks and strikes so well, many have compared his style to Floyd Mayweather Jr., a compliment Cruz gladly accepts – and he thinks it will play in his favor a big way tonight due to the fact Garbrandt has been concussed in the boxing ring and as an amateur in MMA.

“People I’ve faced, and Cody will find out as well, have to adjust to what I do because nobody they have fought takes as little damage as I do or as defensively smart as I do.” Cruz said. “My style is similar to Mayweather because he focuses on not getting hit because he cherishes his mind the way he looks and all those things. I’m the same way.  My brain is very important to me – now if you listen to this guy talk he has already had several concussions and had to stop boxing and fighting for a year. When you get in the cage with me who has seen his fight style before, I can recreate this man in the gym so that I get my hand raised on fight night and that’s exactly what’s going to happen.”

Cruz-Garbrandt will be the classic case of boxer versus puncher. Most believe “the Dominator” will reign supreme and show the world once again why he’s best bantamweight in the world.