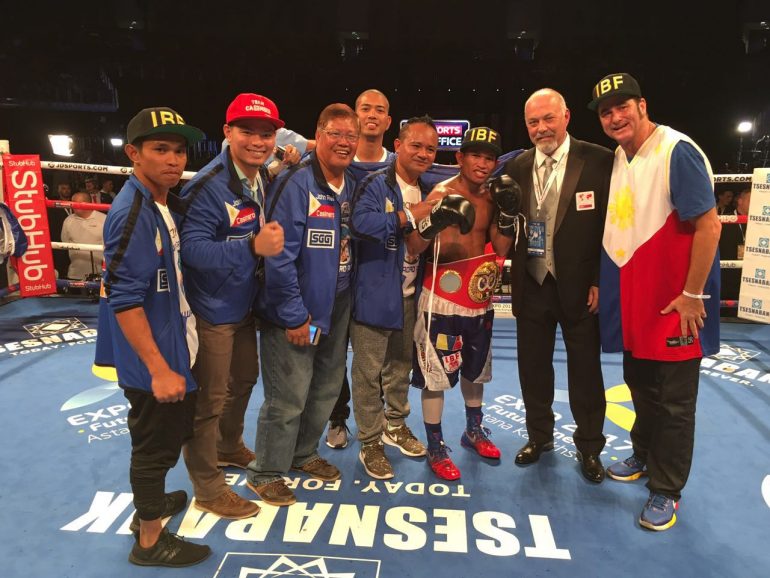 Casimero of Ormoc City, Leyte, Philippines punched his way to a second world championship this past May when he scored a fourth round knockout of Thailand’s Amnat Ruenroeng in China, avenging a contentious loss a year earlier, which was marked by numerous fouls.

Casimero (23-3, 15 knockouts) followed that up with a 10th round stoppage of previously-unbeaten Charlie Edwards in London last September in suppor of the middleweight championship bout between Gennady Golovkin and Kell Brook.

“He’s growing and I think the opportunity is more on super fly. I think flyweight is not anymore competitive,” says Gello-ani.

The title will likely be given up formally by Gello-ani’s partner Sampson Lewkowicz, an adviser and matchmaker based in Las Vegas, Gello-ani says.

The 26-year-old Casimero had previously held the IBF title at 108 pounds and had said before the Edwards fight that he wanted to move up to 115.

The other titleholders at 115 pounds include WBO titleholder Naoya Inoue of Japan, WBA titleholder Kal Yafai of England and IBF titleholder Jerwin Ancajas, who like Casimero is Filipino.

“(WBC junior bantamweight titlist Roman) ‘Chocolatito’ (Gonzalez) or anybody,” said Gello-ani. “Sad to say, Ancajas is on the super fly and he’s a Filipino. But wherever there is an opportunity, that can be done. Maybe on the WBC also.