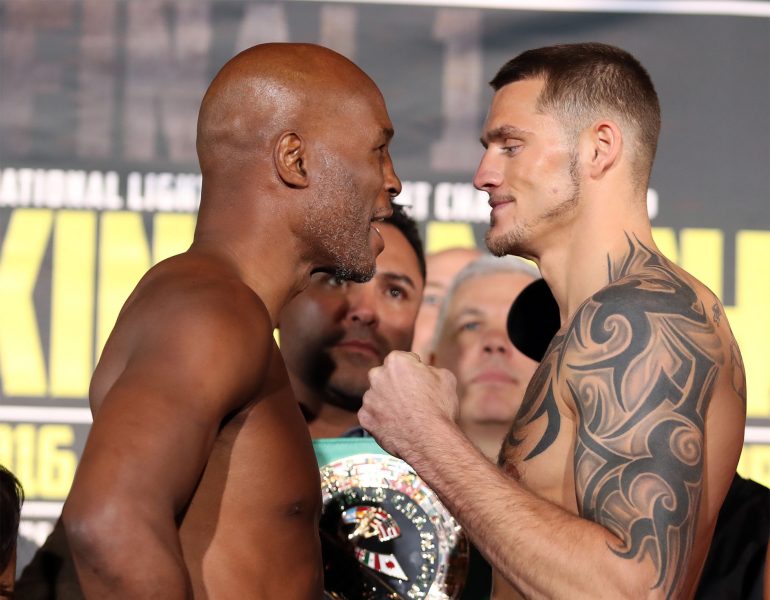 Joe Smith Jr.: The story of Saturday night was the unfortunate – and shocking – ending to the great career of Bernard Hopkins. Smith was more or less lost in the drama.

The union worker from Long Island did his job at the Forum in Inglewood, California, methodically attacking the 51-year-old legend as he would any other fighter. He should’ve been leading by a significant margin after seven rounds, in my opinion, and deserves full credit for delivering the blows in the eighth round that made him the first man to knock out Hopkins. Sergey Kovalev couldn’t do that.

And while the rest of us were aghast at the site of Hopkins falling through the ropes and landing on the hard floor – courtesy of those vicious punches from Smith – the winner celebrated by jumping onto the ropes in one corner and thrusting his arms into the air, as he should have. He has his own career to think about.

I don’t think this was a great victory given Hopkins’ age but it was a valuable one. His stunning first-round knockout of Andrzej Fonfara in June combined with his victory on Saturday have transformed him from a relative nobody to a significant player at 175 pounds.

After the fight, Smith (23-1, 19 knockouts) handled himself as he always does; with humility and class. He congratulated Hopkins on his great career but also said in so many words that this is his time.

“This was supposed to be his goodbye party but it was my coming out party. I had to do what I had to do. I can’t regret it,” Smith said.

I don’t know how far Smith will go. I think his skill set is OK but his punching power is real; it will give him a chance to win against almost anyone and makes him fun to watch, which will serve him well. His best days might lie ahead.

At the moment, Smith has every reason to be very happy.

Bernard Hopkins: S—t happens in boxing. It’s just a shame that it happened to Hopkins (55-8-2, 32 KOs) in his farewell fight.

The old master looked good for a man his age, particularly in terms of his ability to avoid most of Smith’s punches, but I thought he was losing the fight through seven rounds. I think he won two of those rounds at most.

Two of the judges felt differently: One had Hopkins leading by a point, the other had Smith by the same score. (The third gave Hopkins only one round.) That means if Hopkins had been able to rally in the final rounds – as he said he expected to do – he might’ve won what certainly would’ve been a controversial decision.

Of course, none of that matters given the unfortunate events of Round 8. “The Executioner” was supposed to go out with his hand raised or at least on his feet; he wasn’t supposed to go out of the ring, as Joe Louis did against Rocky Marciano in his last fight.

I’ll never forget the site of him flying through the ropes and onto his back on the floor next to ring. I won’t dwell on it, though.

I’ll remember first and foremost how he conducted himself outside the ring – his unrivaled work ethic, the way he took care of himself, his professionalism. He is the perfect role model for his fellow boxers.

I’ll remember his amazing run as middleweight champion – 20 successful defenses and a 10-plus-year reign, both records in the division.

And I’ll remember the important victories, particularly the “upsets” when common sense told us he should’ve retired many years earlier – Felix Trinidad, Antonio Tarver, Kelly Pavlik, Jean Pascal and more. It seems foolish now to have written him off.

The expression “one of a kind” is overused but it aptly describes Hopkins. To say he’ll be missed is an understatement.

Povetkin’s positive drug test: I reacted to the news that Alexander Povetkin (31-1, 23 KOs) tested positive for a banned substance again with a one-word question: “Seriously?”

The Russian heavyweight was scheduled to fight Bermane Stiverne for what the WBC calls its “interim” title Saturday in Ekaterinburg, Russia, but WBC President Mauricio Sulaiman tweeted on Friday that Povetkin had tested positive for the performance-enhancing drug ostarine and stated his organization would no longer sanction the bout, after which Stiverne pulled out. Povetkin stopped replacement Johann Duhaupas (34-4, 21 KOs) in six rounds.

It was Povetkin’s second positive test of 2016. He tested positive for meldonium in May, before he was due to face Deontay Wilder. That fight was canceled but the WBC (and the World Anti-Doping Association) gave Povetkin a pass after the fighter claimed he stopped taking meldonium before it was banned as of January 1.

That should’ve been a wake-up call for Povetkin. It appears it wasn’t, as unbelievable as that seems. Shame on Povetkin and shame on the Russian authorities who allowed Povetkin to fight in spite of the latest revelation. And kudos to Sulaiman, who made a strong statement on Friday.

A few more thoughts on the Hopkins-Smith fight. I think California (and other states) should extend the ring several feet so fighters who go through the ropes don’t do what Hopkins did, fall all the way to the floor. Another option, if you don’t to rebuild rings, is to add a platform beyond the ropes. At the very least, the floor around the ring should have a rubber covering. No one should have to endure what Hopkins did. …

I have a lot of respect for referee-judge Pat Russell but I don’t understand his Hopkins-Smith score after seven rounds, 67-66 (or four rounds to three) for Hopkins. I also take issue with judge Tom Cheatham’s score, 67-66 for Smith. I thought Smith clearly won no fewer than five of the first seven rounds. He was the aggressor and he landed more punches (including hard ones) than Hopkins did. Smith outlanded Hopkins 86-54, according to CompuBox. I hope officials in California have a talk with Russell and Cheatham. …

Oleksandr Usyk’s handlers are hoping the 2012 Olympic gold medalist is the next Gennady Golovkin. He didn’t look the part against Thabiso Mchunu (17-3, 11 KOs) on the Hopkins-Smith card, at least not in the early rounds. Usyk had trouble coping with Mchunu’s awkward style and diminutive stature. The South African is listed as 5 feet 11 inches (180 cm) but he’s not that tall; Usyk is a legitimate 6 feet 3 inches (190 cm). However, Usyk (11-0, 10 KOs) found his groove by the fourth or fifth round and began to break down Mchunu, who ended up on the canvas three times and was stopped in the ninth round. It was a good, not great performance by Usyk, which won’t satisfy those who expect him to put on a spectacular show every time out. As colleague Tom Gray put it, “He’s a victim of his own hype.” …

Joseph Diaz Jr. (23-0, 14 KOs) looked very sharp against a capable opponent in Horacio Garcia (30-2-1, 22 KOs) on the Hopkins-Smith card. Diaz is one of the most efficient fighters in the world, throwing hard and very accurate punches even under fire from a fierce opponent. And his defensive skills are underrated. He landed 266 of 629 punches overall, a high connect rate of 42.3 percent. He landed 250 of 476 power punches, 52.5 percent. Meanwhile, Garcia, the aggressor most of the fight, landed a paltry 16.8 percent of his punches overall. That’s why Diaz won a shutout decision. It will be fascinating to see how Diaz fares when he faces the best in the featherweight division, which isn’t far off. …

Check out Hassan N’Dam’s (35-2, 21 KOs) first-round knockout of Alfonso Blanco (12-1, 5 KOs) on Saturday on the island of Reunion. Brutal. N’Dam needed a spectacular victory after falling flat in the 2016 Olympics. … Light heavyweight Sullivan Barrera (18-1, 13 KOs) rebounded nicely from his loss to Andre Ward by stopping Vyacheslav Shabranskyy (17-1, 14 KOs) in seven rounds Friday at Fantasy Springs Casino in Indio, California. Shabranskyy was undefeated going into the fight.