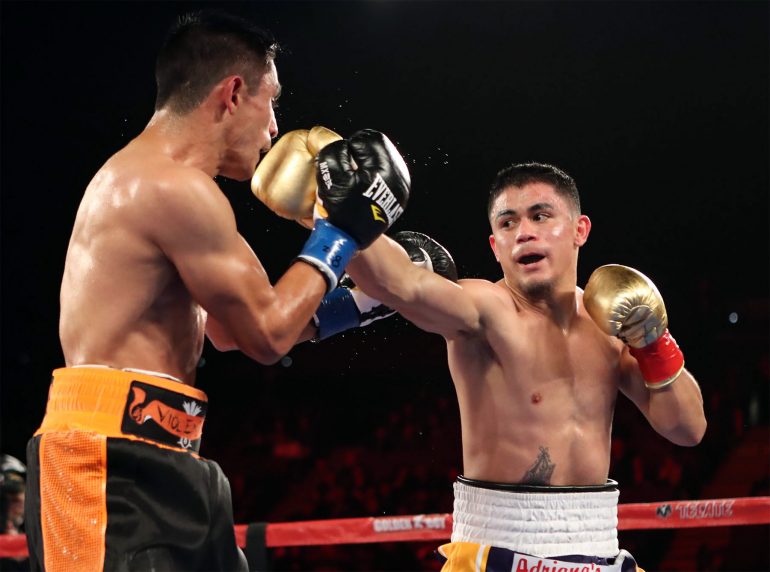 All three judges ringside scored it the same (100-90), and it was a truthful tale to the precise counter-punching of the 24-year-old southpaw from South El Monte, California.

Diaz (23-0, 13 knockouts) passed on any sort of feeling out process, and the 2012 U.S.Olympian quickly found a comfortable range to unleash his left uppercut and hooks. Fighting out of Guadalajara, Mexico, Garcia had the same idea of squaring up to fight, and his attack was focused on Diaz’s body to start. It made for a good action fight, but it didn’t take long for the superior boxer to separate himself.

Garcia (30-2-1, 22 KOs) wasn’t throwing or landing at the rate of Diaz. After virtually every exchange – and there were many – it was the work from “Jo Jo” that had the lasting impression. Diaz’s counter punching was the one facet of his skills that highlighted his performance. Even the smallest windows of opportunity Garcia gave, Diaz found his way to punch through them. He also fought well with his back against the ropes, in fact, he found himself in that position so often, it seemed like “Jo Jo” wanted to fight in a crowded space.

There was a moment in the eighth round where Garcia covered his left eye with his glove after receiving a clean left hook from Diaz. The Mexican was a bit shaken up, but that was the only moment in the fight where Garcia showed any serious signs of distress. It wasn’t a powerful display from Diaz, but a precise one, and at the end of the tenth and final round, Garcia walked to his corner with a bloody nose and a beaten man.

“I knew I was facing a tough, experienced opponent, so my plan was to go in there and get him using my jabs, angles and everything I worked on in my training camp,” said Diaz after winning his fourth fight of 2016. “I came in and got what I wanted and I’m very happy with the outcome.”

In his American debut, Oleksandr Usyk got a ninth round stoppage win over Thabiso Mchunu to defend his WBO cruiserweight title for the first time.

It was a slow start for the HBO television opener, and Mchunu took advantage of Usyk’s tentativeness in the early rounds. The South African won the battle of jabs within the first six minutes, and considering he was the much shorter of the two southpaw’s, it came as a bit of a shock. What wasn’t a shock, however, was the disapproval of the crowd as the two felt each other out.

Usyk (11-0, 10 KOs) began to let his hands go in the third round, and the activity alone slowly started to sway the fight his way. A 2012 Olympic gold medalist from Ukraine, Usyk put his punches in combinations, sometimes reaching up to six shots in a row. None of which found the body of Mchunu, but when in close range, Usyk threw a chopping left hand that would crack the neck of Thabiso.

Mchunu (17-3, 11 KOs) took those shots well, but in the sixth round, Usyk’s variety of punch selection started to make that untrue. A left uppercut from Usyk sent Mchunu to a knee in the round for the fight’s first knockdown. Mchunu, 28, wasn’t seriously hurt from the shot, but the fight was quickly slipping away from him. Usyk began to throw his jab to Mchunu’s body in the following rounds, and it was a sign of him being in full control up until the fateful ninth.

A left hook sent Mchunu to another knee a minute in to the ninth. Usyk then stepped on the gas pedal with pressure, and Mchunu dropped to a knee for a third time. Unlike the others, this kneel was involuntary, and right when he fell to the canvas, referee Lou Moret ditched any start of a ten-count and waved off the fight at the 1:53 mark.

“I get to take my belt back home, and I got to do it with my fellow Ukrainians in the crowd,” said Usyk after the victory. “We were hoping to get the knock out earlier, but we got it and we’re looking forward to bringing more fights to this cruiserweight division.”

“He got the better of me, and he used it against me,” said Mchunu, after what was his first attempt at a world title. “All I can say now is that we have to go back to square one.”

Brazilian super middleweight hopeful, Yamaguchi Falcao, had an easy night against German Perez. The 28-year-old Olympic bronze medalist from Sao Paolo got the technical knockout victory after Perez twisted his ankle before Falcao knocked him down with a flurry of punches.

Perez (10-3-3, 3 KOs) actually turned his back away from Falcao after his right ankle twisted and Falcao started to throw. Ruled officially a knockdown, Perez took the count from referee Zac Young, but didn’t even other trying to get up knowing he was injured. Falcao (12-0, 5 KOs) gets his third victory of the year, all of them stoppage wins within two rounds.

“I wasn’t expecting getting the knockout so early,” said Falcao after the short night. “I kept my distance and just looked for the perfect opportunity to land an overhead punch, and when I did – I felt that I hurt him and unleashed on him. I can’t wait to start 2017 rejuvenated and at a top notch level.”