Cermeno once again too slick for Qiu in China 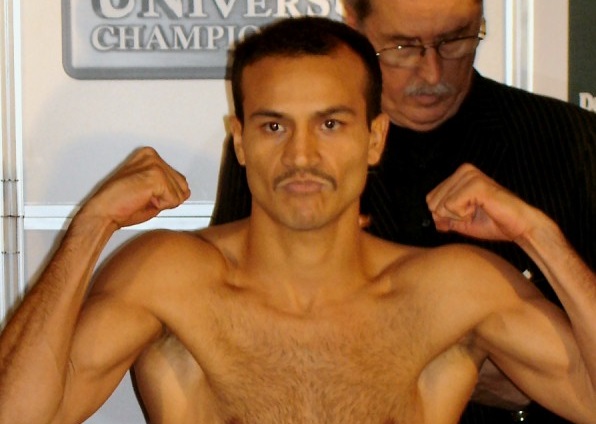 Venezuelan road warrior Nehomar Cermeno once again proved to be too skillful for the younger, cruder XiaoJun Qiu, winning a 12-round unanimous decision Saturday in their junior featherweight fight in Hangzhou, China. The scores were not read out in English and were not immediately available online.

The 37-year-old Cermeno (26-5-1, 15 knockouts) had scored a 12th-round technical knockout the last time they met, June of this year, and reminded the 26-year-old Chinese fighter of his power in the fourth round, landing a flush right hand on his chin to blunt his aggression.

Determined to get his revenge, Qiu (21-4, 10 KOs) pushed forward, spurred on by the Chinese fans chanting “Jiayo!” (an encouragement that translates to “put more oil”). But Qiu remained as predictable as he was in their first meeting, plodding forward with little head movement and a non-threatening jab, and in the seventh round was met with sustained fire for the first time in the fight.

Cermeno had a tense moment in the 11th round as he traded punches with Qiu and fell to the canvas. It appeared a left hand had preceded the fall, though referee Luis Pabon ruled it a slip. Whatever momentum Qiu had heading into the 12th went for naught as he didn’t push for the knockout he needed.

The fight was contested for the “regular” WBA junior featherweight title, which THE RING does not recognize as a legitimate world title, and not the proper WBA 122-pound belt, which is currently held by Guillermo Rigondeaux. Neither fighter was rated among the top 10 of THE RING’s junior featherweight rankings.

Cermeno is now unbeaten in his last seven fights (including a no-contest resulting from an an early headbutt) following a stretch between 2010 and 2012 where he went 1-5-1, including two split-decision losses to Anselmo Moreno and a three-round knockout loss to Fernando Montiel.