Deal appears imminent for GGG and Jacobs for March 18 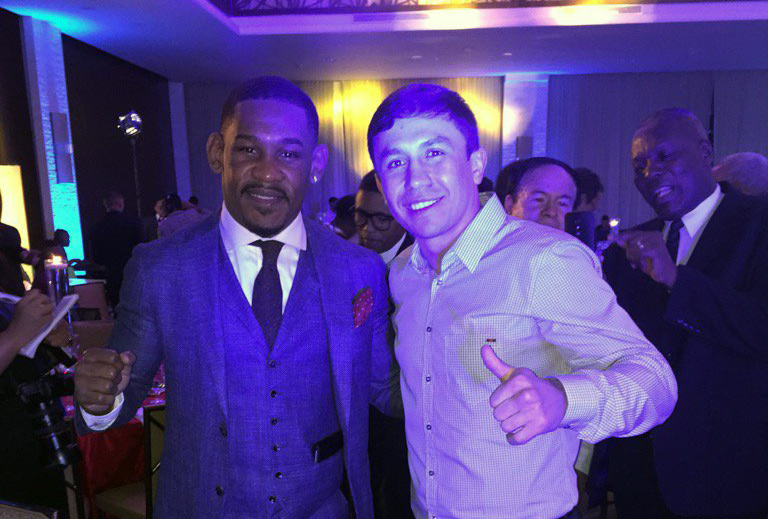 The look said it all.

Danny Jacobs posted a video on social media on Thursday night, hinting of what is to come. “All you got to do is stay tuned,” Jacobs said in what appeared to be a crowded restaurant. He captioned the post, “Never ran never will!!”

For more than three months, Jacobs and fearsome middleweight champion Gennady Golovkin have been embroiled in negotiations. Dates surfaced and fell by the wayside, frustrating an irritable fan base. This time, however, it appears the public may finally have something to cheer about.

With a WBA purse bid scheduled for Monday, RingTV.com has learned the sides are close to finalizing an agreement for Golovkin to take on Jacobs, his WBA mandatory, on March 18 at Madison Square Garden on HBO Pay-Per-view for Golovkin’s WBA/IBF/WBC titles.

Nothing has been signed or finalized, a source cautioned, but barring something unforeseen, a deal appears imminent, multiple sources said. Golovkin trainer Abel Sanchez told RingTV.com that Tom Loeffler, who promotes Golovkin, revealed to him an agreement was nearly at hand. “He insinuated it was 95 percent done, that it was that close,” Sanchez said in a phone interview. “He said there were a couple other issues that he has to iron out, but he told me that it’s very, very close and we would know within the next couple days.”

The knockout artist Golovkin would finally get another blue-chip opponent to test himself against after he has been criticized for taking on those who offer little resistance. Golovkin has been that dominant in his reign. And Jacobs (32-1, 29 knockouts), a cancer survivor and former amateur prodigy, would have a chance to realize his vast promise with another world title shot after he was stopped in the fifth round by Dmitry Pirog in 2010. Moreover, HBO will get a much-needed shot in the arm after a dull 2016 that featured too many mismatches. While Golovkin will be favored against Jacobs, it’s an intriguing match because of Jacobs’ size, athleticism and ring acumen.

A deal would also allow the sides to avoid a purse bid, which would have given Golovkin 75-25 control of the winning bid. It also allows the camps to sidestep the thorny possibility of Jacobs advisor Al Haymon winning the auction and bringing the fight to Showtime, testing Golovkin’s contract status with HBO. While Jacobs, 29, wanted to fight at Barclays Center, a place he has close business ties with, he would return to The Garden, where he has fought three times in his career and also won four Golden Gloves championships.

Brooklyn’s Jacobs, who is not signed to Showtime, also returns to HBO for the first time since 2010; the 34-year-old Golovkin (36-0, 33 KOs) would make his second appearance on HBO PPV after his eighth-round demolition of David Lemieux in 2015.