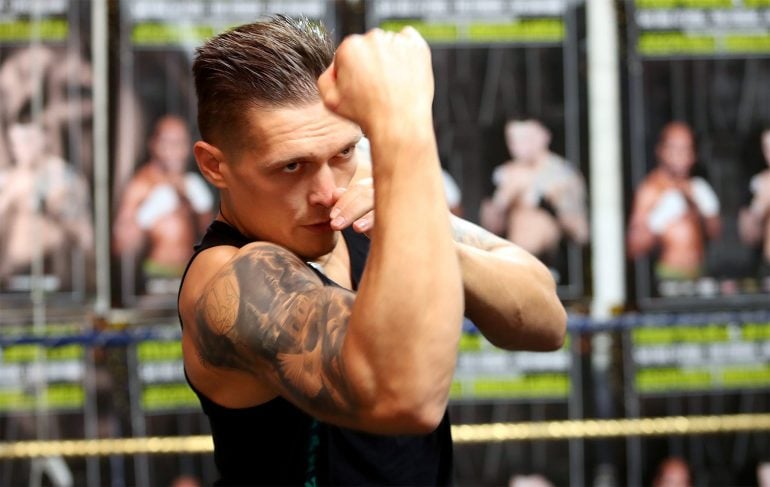 LOS ANGELES – As it was written in the Book of Proverbs, first impressions are the most lasting. For Oleksandr Usyk, his introduction to the American main stream will take place this Saturday at The Forum in Inglewood, California.

During a recent media workout for the HBO tripleheader topped by the Bernard Hopkins-Joe Smith Jr. at City of Angels Boxing Gym, the Ukrainian’s matter-of-fact demeanor wasn’t what you’d expect from someone who was about to achieve a lifelong dream.

“My name is Oleksandr,” he greeted RingTV.com with a thick accent and firm handshake. Alongside his translator/promoter, Alex Krassyuk of K2 Promotions, Usyk continued, “I’m very happy to be here. My goal was to come here someday, and now I’m here.” 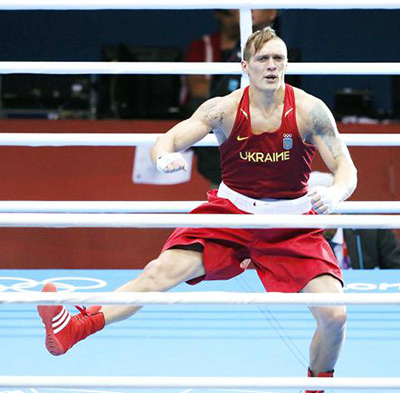 Usyk isn’t a complete unknown to the hardcore boxing fan in the United States. He won an Olympic gold medal in the 2012 London games as a heavyweight, but it was his distinct look and post-fight celebration that launched him into the vast universe of internet fame. Now, Usyk will make his debut on American soil and does so looking to defend his WBO cruiserweight title for the first time against Thabiso Mchunu.

Serving as HBO’s opening bout to Hopkins’ final fight, Usyk will be more than just a dancing YouTube sensation after making his introduction to TV viewers stateside.

Pointing to his heart without saying a word, Usyk explained simply the inspiration behind his celebratory dancing. No longer does he bare the same pony tail that sat atop his shaved head, but when he wants to, this character can still turn you to stone with his bulging eyes, or melt you with a big smile that proudly displays the gap between his two front teeth.

Like many, it has always been a goal for Usyk to fight in the U.S. Some fight here for fame, money, legacy, or pride, and when presented with these specific motives, Usyk was asked what he fought for.

“I don’t care much about the money at the moment,” he said. “I want to show high quality boxing. I want to introduce myself to the American public, and to go on showing the boxing I like. I will have to earn the money.”

The boxing he portrays is also unmistakable, especially for his size. Standing 6-foot-3, Usyk is nimble in the ring, and the way he uses his feet is in stark contrast to the typical cruiserweight who goes toe-to-toe. His skills were best exemplified three 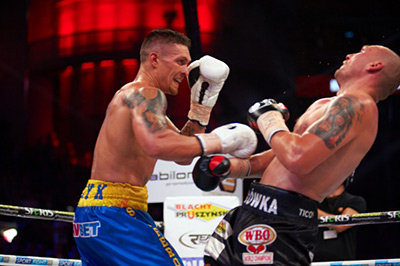 months ago when he won the WBO cruiserweight title from Krzysztof Glowacki on points. Earning the unanimous decision in Glowacki’s home country of Poland, Usyk’s performance was impressive, but when you ask him if that was his toughest fight to date, he’ll take you back to his crowning achievement.

“The hardest fight I ever had was not physically hard, but mentally hard,” he said. “It was the final bout in the Olympics. When I came to my corner after the first round without taking even a punch in the three minutes, I was losing on points. That was probably the most difficult moment in my career.”

That fight was against Italy’s Clemente Russo, who beat Usyk in the 2008 Beijing Olympics quarterfinal. Vengeance was on Usyk’s mind during that fight, and of course, the dancing came about once he achieved it. Truly a special match that was for Usyk, and when asked if any accomplishment in the professional ranks will overcome that, he responded, “Nothing.”

With that said, Usyk (10-0, 9 knockouts) has already made history. In only his 10th professional fight, he became the quickest to ever win a world title in the cruiserweight division – beating Evander Holyfield’s previous record of twelve. Recently, another Gold medalist from Ukraine has made a quick splash into the record books. In 2014, Vasyl Lomachenko, the current WBO junior lightweight title holder, became the fastest to ever win a world title in any weight class (in his third pro fight). With similar accomplishments so far and both having a knack for clever footwork, the comparisons were made for Usyk, but he disagreed. 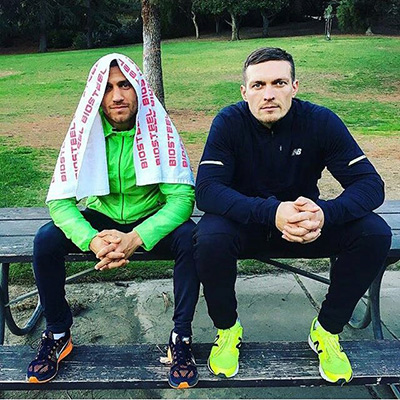 “No. He’s my brother. He’s the only one. He’s unique,” Usyk said. The two are attached at the hip whenever seen at boxing events, and when presented with the idea of them being boxing’s Batman & Robin, Usyk laughingly replied, “Maybe!” Then added, “We are turtle ninjas.”

Their bond, however, goes further than just being boxers, and Usyk shed light on that when asked to confess something they have deep conversations about.

“The ideology of life,” Usyk stated. “We discuss topics for how we bring up our children. In what way we should go and what actions we should undertake with our children.”

A father to three children of his own, he attributes his own wisdom to their lives. “When my daughter Liza was born, I became a man. Before that I was a young boy.”

Usyk turns 30 in January, and when asked how he felt reaching such a number, he referred back to what harnesses his unabashed joy in the ring. “I feel very good. I am 18 in my soul – in my heart.”

Usyk’s aspirations as a titleholder are to unify the cruiserweight division with as many belts as possible before an inevitable move up to America’s glamour division. In a conversation with RingTV.com’s Mitch Abramson this week Usyk also showed interest in fighting one of the biggest you stars of the sport – IBF heavyweight titleholder Anthony Joshua.

“It would be very interesting for me to fight him someday,” he said. “I don’t think it’s going to be possible within a certain period of time. We’ll put it for the future.”

Before he reaches for the stars, Usyk must make sure his first performance in front of an American audience is a successful one. Mchunu (17-2, 11 KOs), of Cato Ridge, South Africa, isn’t a world beater by any means, but his short stature could present some unforeseen problems for Usyk. When asked how he’ll have to adjust to him, Usyk responded, “We’ll see on Saturday night.”

Looking at his track record, Usyk usually relishes his opportunity at a first impression. Especially once his trainer, James Ali Bashir, spoke about his protégé after the initial interview.

“We met each other in a Wladimir Klitschko training camp in Austria,” Bashir told RingTV.com. “I worked with him for two days, and after that he came to me and asked if I can come to Ukraine to work with him.”

Bashir, who is one of the stalwarts of the famed Kronk Gym in Detroit, remembers a simple request upon their first meeting three years ago. He asked to wrap Usyk’s hands before eventually feeling him out on the mitts. Krassyuk, who was also in on the conversation, added Usyk’s perspective about their first encounter.

“We flew back the next morning, and Usyk said to me – I like this guy. I think I would want him to be my trainer,” said Krassyuk. “It was not like, he will be my trainer. His first fight, we didn’t have a trainer. We planned for Lomachenko’s father to train him, but he was out of Ukraine by that time. For the next fight, he said, listen – I want Bashir for sure.” 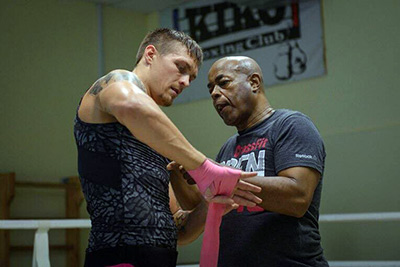 It was instant chemistry within that span of two days in Austria. “It’s been like that ever since,” said Bashir. “We never even had an argument in three years. I’ve had an argument with every boxer I worked with. Not one time – not once – did we ever have a disagreement. Every boxer/trainer has some kind of conflict inside three years.”

“It’s probably because his English is not that good,” Krassyuk jokingly chimed in. Bashir also laughed, but he still felt amazed their rapport with each other has gone so well – citing all people within boxing speak the same language – and it’s a rarity when trainers and boxers don’t have the occasional argument.

“I think he’s the most studious,” answered Bashir when asked what aspect of Usyk separates him from all the others he has trained. “When it comes to listening, and then applying what he’s listening to. I think he’s the most studious boxer I have ever trained in 45 years. I worked with Shannon Briggs, Tim Witherspoon, Monte Barrett, Jameel McCline. You might have one boxer that might be a harder puncher, a better boxer, that was quicker, faster, but all around, as far as having the whole package, he’s the best one I’ve ever worked with.”

That’s high praise from a man with a wealth of experience in the fight game, but he still sees room for improvement for Usyk, and when asked to specify a certain aspect he’s trying to make better, Bashir responded:

“Yes. Boxing. I’m not quite at the point where I’m totally satisfied because I always think he can be better. As good as he is – as good as I think he is – I think that he could be better. With most boxers I work with, I want to make sure that they can box. He can punch – I know that. I need to know that he knows the ins and outs of boxing. How to execute the jab especially. I’m a firm believer in the old rule that if you have a good jab then you can put together any other punches you need to put together inside of a fight. I come from the old school and I stick with that. You have to learn to use the jab and be patient with the jab. The southpaw jab is a very menacing jab. People say, well a southpaw is just an orthodox guy turned around, but I don’t care – saying it is one thing, and then doing it inside of the ring is a whole different thing.”

As for Usyk’s strengths, Bashir cited his unquestionable athleticism. “That’s something I worked on inside the three years we have worked together. He had good movement, but it was uncoordinated – there was no timing, no rhythm or nothing. That’s something we have worked on, and now he’s got it down to where I’m very satisfied.”

When talking about Usyk, Bashir’s enthusiasm couldn’t be contained. In order to get a full grasp on how excited he was to see Usyk’s career pan out, Bashir was asked to finish the following sentence: I haven’t been this excited about a protégé since _______.

“I had a boxer a long time ago. He could’ve been a good boxer, but he failed. He just didn’t have the whole package. I was very excited about Maurice Harris. It’s like the ingredients that complies to the anatomy. Gasses, liquids, and solids. If we subtract one of those ingredients, the other two just don’t do us any good. As good a boxer and talent Maurice was, he just had too many missing ingredients.”

Harris fought Larry Holmes, was the first guy to beat David Izon, knocked out James Thunder, and had a Fight of the Year contender when he fought Derek Jefferson on HBO.

“Look Maurice Harris up – he can fight – I was very excited about him, but this is the one,” Bashir said while pointing to Usyk across the room. “he has the whole package.”