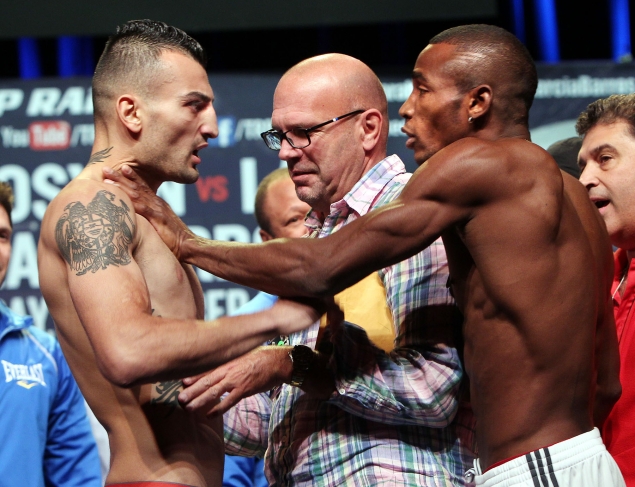 Lara, 33, did his best to sell the fight as competitive to a frustrated fan base that unleashed its skepticism on Twitter shortly after the bout was announced. It will take place at the Hialeah Park Racing and Casino in Miami as part of a PBC on Spike TV broadcast.

“Yuri Foreman is a former world champion who is dedicated to this sport and will be looking to win another world title,” Lara, who defected from Cuba, said in a prepared statement. “I expect nothing but the best from him. On fight night, I’m making another statement and going for the knockout! After this fight, it’s time to unify the division, then move up to win the middleweight titles. Everyone should tune-in because it’s going to be a great night of boxing.”

The 36-year-old Foreman, an ordained rabbi, hasn’t fought anyone remotely as good as Lara since he took a 154-pound title from Daniel Santos in 2009 in a virtuoso performance that showcased his boxing ability against a veteran who wouldn’t fight again. Foreman lost the title in his next bout to Miguel Cotto at Yankee Stadium in the Bronx and took nearly two years off before coming back against Lenwood Dozier on November of 2015 . His last win, a second-round stoppage of Jason Davis, took place on June 3. Now, he will be thrust into a world title bout against an opponent who will be heavily favored.

“I’m thrilled to be fighting for the world title,” said Foreman in the release. “I’m really looking forward to showcasing my skills and talent and becoming a two-time world champion. At this stage of my career, it would be a tremendous accomplishment. Lara is very crafty and many elite fighters have had trouble dealing with his style, but I have studied him and am very confident that I will defeat him by presenting him with something he’s never seen before.”

Lara hasn’t exactly faced a Murderer’s Row of opponents recently, either. Despite his status as one of the more skilled fighters today, he’s faced Ishe Smith, Delvin Rodriguez, Jan Zaveck and Vanes Martirosyan since losing a split decision to Canelo Alvarez in 2014. In facing Foreman, he’s taking on another supposed light touch. But officials are viewing the fight as a tune-up for an eventual 154-pound unification bout in 2017 with fellow titleholder Jermell Charlo eyed as a possible opponent.