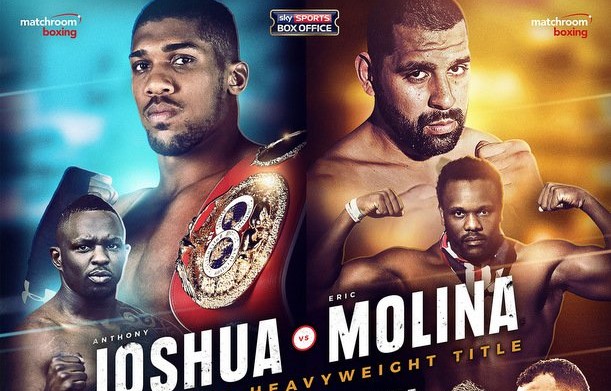 MANCHESTER, England – Unbeaten British heavyweight sensation Anthony Joshua predictably banged out Eric Molina to retain his IBF title with a ridiculously easy stoppage at the Manchester Arena. The official time was 2:02 of Round 3.

Joshua, THE RING’s No. 5 rated heavyweight, boxed very well, although the visitor was reticent to make a move for fear of being hurt. Molina merely prolonged the inevitable, however, and a big combination, punctuated by a perfect straight right, floored him heavily.

The Mexican-American fringe contender rose half-heartedly but was nailed repeatedly in the corner, prompting referee Steve Gray to halt the slaughter.

“I was patient because people are fresh early,” said Joshua (18-0, 18 knockouts) who had barely broken sweat. “It’s hard dealing with a negative fighter. Someone who fights with you gives you opportunities but when someone doesn’t, you have to create them.”

This matchup was scrutinized from the moment it was announced, more so because Joshua versus former champion Wladimir Klitschko looked nailed on. When Klitschko sustained a minor injury and that superfight fell apart, in stepped the infinitely less-threatening Molina, who had literally no chance. The silk purse was replaced with a sow’s ear.

The good news? Matchroom promoter Eddie Hearn entered the ring afterwards with Klitschko and officially announced that Joshua will defend his title against the legendary Ukrainian on April 29 at Wembley Stadium. The Manchester Arena exploded in anticipation and the heavyweight division finally has a chance to redeem itself following a hectic 12 months.

Among the many co-featured bouts of the event, Scott Quigg saved himself from criticism in his featherweight debut by erasing an average performance with a highlight-reel 10th-round knockout of Mexican trial horse Jose Cayetano. Quigg, who was taking part in his first bout since suffering a broken jaw in a split-decision loss to rival Carl Frampton, in February, was superior but struggled with ring rust throughout. However, the right-hand knockdown, which ended the fight on impact, was a terrific punch and the former WBA junior featherweight titleholder moves on to bigger things. The fight was scheduled for 12 rounds.

British heavyweight rivals Dillian Whyte and Dereck Chisora punched each other to a standstill in a 12-round heavyweight attraction. At the end of a thrilling encounter, the judges awarded a split decision to Whyte but both men covered themselves in glory following an ill-tempered build-up. Chisora, a former world title challenger, fought as well as he has in years and the crowd booed the result, which could have gone either way. The official scores were 115-114 and 115-113 for Whyte, with the third judge voting 115-114 for Chisora.

Katie Taylor, the former female amateur sensation, from Ireland, won her second outing as a professional with a hard-fought six-round decision over Viviane Obenauf. Taylor, who won Olympic gold at London 2012, was by far the better fighter but had to endure a spirited challenge from her opponent who fought gamely throughout. The referee scored the bout 60-53 in Taylor’s favor, which included a bogus knockdown that was clearly a slip.