The fight is on for Crawford and Molina despite weighty issue 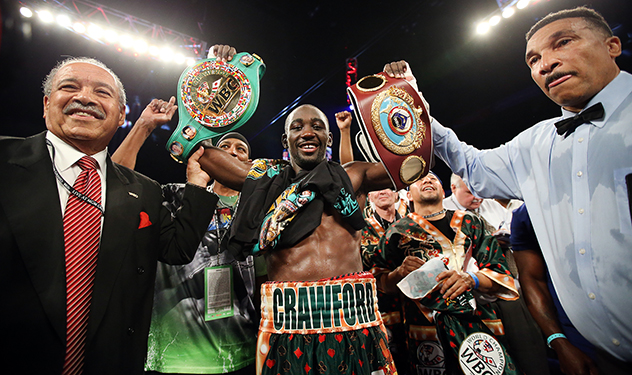 The fight is on! Or for those who don’t view it as a competitive fight — the mismatch is on!

The camps for Terence Crawford and John Molina Jr. reached a financial arrangement for their junior welterweight title fight on Saturday in Omaha, Nebraska on HBO to go on despite Molina coming in overweight at Friday’s weigh-in. Molina’s side shelled out “an amount amenable to both parties,” Top Rank VP Carl Moretti told RingTV.com in a text message without getting into specifics.

A doughy-looking Molina initially tipped the scales at 144 pounds, four pounds over the 140-pound weight limit at Friday afternoon’s weigh-in. He was given two hours to lose the weight and returned at 143.4 pounds, putting the fight in jeopardy. The camps negotiated for three hours until coming to an agreement around 9 p.m. ET. Crawford is set to defend his RING/WBC/WBO belts on Saturday; Molina isn’t eligible to win the titles and they will be vacated if he does pull the upset with Crawford allowed to fight for them in his next fight, according to Moretti. Additionally, there is no hydration clause, so Molina won’t have to weigh-in again before Saturday’s bout with Crawford, who is regarded as one of the top talents in boxing while few are giving Molina a chance.

As an added plot-twist, Molina is advised by Al Haymon, who was previously at odds with Bob Arum, who promotes Crawford. Haymon doesn’t usually do business with HBO and speculation raged on social media that Haymon was behind Molina coming in overweight as a way to torpedo HBO’s plans. Even for social media, this seemed an especially sinister idea. A spokesman for Haymon denied this was the case, and Haymon and Arum appear to be on friendlier terms these days. They settled a $100 million federal anti-trust lawsuit in May, paving the way for them to do business with each other.

Molina failed a drug test for a banned diuretic after his loss to Adrien Broner on March 7, 2015. He was issued a seven-month suspension and fined $90,000 by the Nevada State Athletic Commission. Molina tested positive for Furosemide, a diuretic normally used to aid in weight loss or as a masking agent. Molina denied ever knowingly taking a banned substance to the Nevada Commission and said making weight wasn’t a problem against Broner. Molina won two fights after the loss to Broner, most recently upsetting Ruslan Provodnikov on June 11 in a bout at 140 pounds