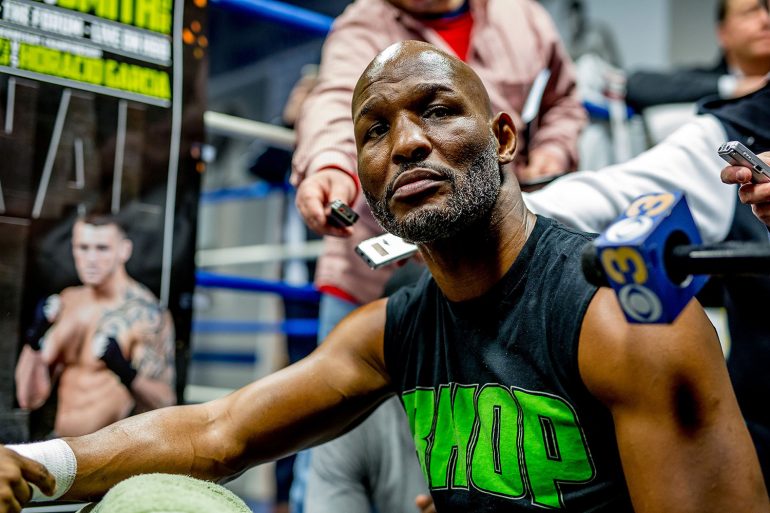 PHILADELPHIA – They gathered there with their cameras, digital tape recorders, camcorders and cell phone extension rods, all waiting for the “old man” to walk through the back door of Joe Hand’s Gym on Third Street Monday afternoon. The old man didn’t disappoint them. 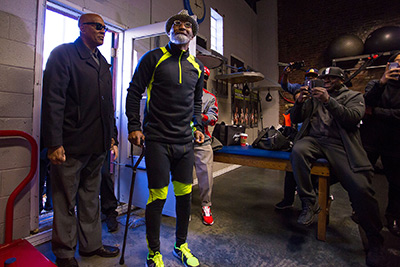 Bernard Hopkins entered his media day workout wearing a disguise – a grey beard and spectacles hanging from the tip of his nose under a checkered fedora. The future hall of famer stooped slightly over, walking with the help of a black cane.

Hopkins got his point across, if some want to think of him as an old man, he would look the part.

Hopkins (55-7-2, 32 knockouts) played to the crowd, promoting his fight against 27-year-old light heavyweight puncher Joe Smith Jr. (22-1, 18 KOs) in a fight dubbed, “The Final 1,” on Dec. 17 at The Forum in Inglewood, California. The fight, which Hopkins says will be his last, tops a tripleheader on HBO.

However, many media members there to watch the 51-year-old work the pads, do some shadow boxing and jump rope, have their doubts about Hopkins keeping his word.

The former undisputed middleweight king and light heavyweight champ has always been defiant. The foundation of his legend was forged on insolence. The world goes left, “The Executioner” would invariably go right. His body tells him one thing, his incredible willpower tells him something else.

“Joe Smith Jr., my opponent, is younger, (but) I always put faith into my training, so my goal is to deflate him and win,” Hopkins said. “As far as the strategy, that will displayed on Dec. 17. There’s no difference in my training. Style wise, I’ve seen every style that there is. This is the last one, because without the emotions in it, this is the last one based on knowing the time that I feel, compared to 10 years (ago – before the Antonio Tarver fight) when I made the announcement I was done. 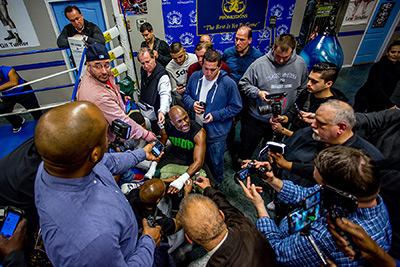 “I’m glad I reneged on that 10 years. Since then, I’ve added to my legacy even further, and no one is complaining. It’s the right time, because no one is complaining about lack of speed, lack of this, or that as far 10, 15 years ago, but when you see that I’m doing this for three decades, that’s one of the reason why I’m key to winning the fight, but making it the final one. After that, it becomes reaching. When you fight off reaching, there is nothing behind that. I’ve been on point the last six, seven weeks. You always have to be on point.”

Hopkins doesn’t think he’s accomplished everything yet, or else, he explained, he wouldn’t be getting into the ring one last time.

He says he considers others’ opinions, but he made an interesting point about how everyday people grow content and stop challenging themselves. Hopkins stresses his challenges never ended.

“Everyone here has been reminded about age somewhere down the line, good or bad, and so to me as I made my entrance today, I like to recognize my age, but I recognize the rules don’t apply to everyone,” Hopkins said. “One headline will be written somewhere that rules don’t apply to everyone, and that can go a long way. It can be nasty, that term, and it can also be educational and positive. That rule that I’ve been defining, and I don’t look at it as others have – as Russian roulette and rolling the dice – I look at myself as one of the exceptions to the rules.”

Hopkins is working under John David Jackson, who Hopkins once was a sparring partner for and who he once defeated in a 1997 defense of the IBF middleweight title. Jackson, who had been a co-trainer/member of Hopkins’ camp several years ago, obviously knows the Philadelphia native. He fought Hopkins, sparred with him, lost to him, and trained Sergey Kovalev to beat him.

The Kovalev fight, on Nov. 8, 2014 at Boardwalk Hall in Atlantic City,  was the last time Hopkins was in the ring. He had to rise from a first-round knockdown and narrowly escape serious punishment to get out of the 12th. It was hard to watch. 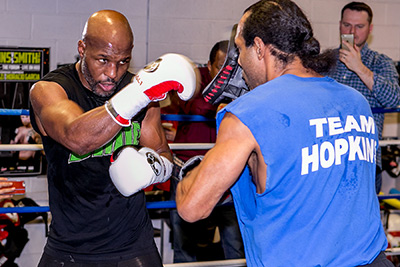 “I’ve known Bernard for 30 years, and we go way back together, and when we first met (he was) a raw, rugged, didn’t-give-damn type of fighter,” Jackson said. “He’s learned the game and he listens. This is a real pleasure to walk that last mile with him. There is nothing that I can really teach him, all I can remind him of is things he should do and things that may have gotten away from him. Remember, I did work with Bernard for his fight with Kelly Pavlik [in October 2008].

“For him, I want to remind him of certain things that have worked for him. Joe Smith is not Sergey Kovalev. If Smith doesn’t do the right things, Bernard will take him to school like he has everyone else. I do see this fight like his fight against Kelly Pavlik. I wrote the blueprint for that fight. That was my game plan and strategy and he performed it to a ‘T.’ We don’t have really many concerns for Joe Smith, and I don’t want to sell him short. He needs to be consistent against Bernard, but I don’t know if he’s capable of doing that.”

Jackson said Hopkins will need to watch his pace and tempo against Smith. Both Hopkins and Jackson admit that “The Executioner” needs to watch his reserves and energy level.

“It may not be a benefit for the fans, but if it works for him, it will be in the ring and do what he needs to be done to be victorious and walk away with a victory at the end of his career,” Jackson said. “That’s all anyone wants, for Bernard to walk away as a winner.”