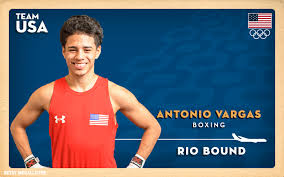 Split-T Management announced its second signing of a 2016 U.S. Olympian in the past week, part of a flurry of signings for the New York-based firm this year.

Just days after the company revealed it had inked 19-year-old Olympic middleweight Charles Conwell, Split-T Management said it scooped up Antonio Vargas, who fought at flyweight for the U.S. in Rio this summer. “The Olympics did not go as I wanted,” Vargas said in a prepared statement on Tuesday. “I lost to the eventual gold medal winner. The loss made me real hungry and now I train harder than I ever did before because I want to be the best.”

Vargas reached the second round in Rio, losing on his 20th birthday to Uzbekistan’s Shakhobidin Zoirov by a unanimous decision. While the lion’s share of the attention went to eventual silver medalist Shakur Stevenson, Vargas was viewed as another possible medal contender before the start of the Games. A native of Kissimmee, Florida, Vargas intends to fight at either 115 or 118 pounds, and he has spoken of possibly winning titles in four different weight divisions.

“I would compare my style to Manny Pacquiao, Vasyl Lomachenko, and going back  a bit, Orlando Canizales,” said Vargas, “because all three had fast hands and feet with the ability to stop on a dime and unleash powerful shots to the head and body that can get you out of there.”

Split-T Management, which is named after the Split T offensive formation in football, has had a busy 2016, signing a bevy of amateur standouts, such as Teofimo Lopez, Marquis Moore, Conwell and now Vargas. The activity coincides with the hiring of former Lou DiBella-matchmaker Joe Quiambao in October of 2015 as its director of boxing operations.