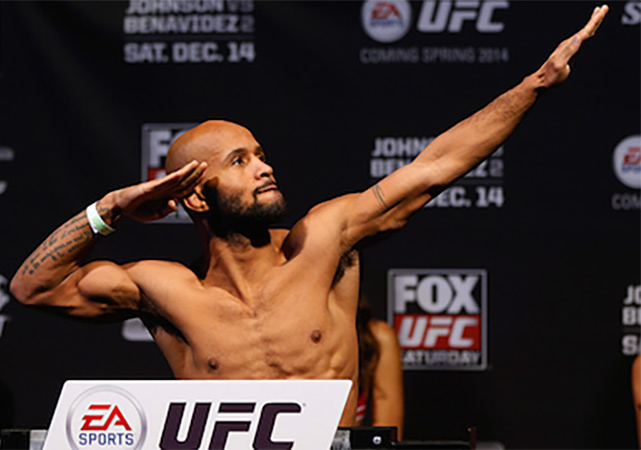 Elliot was a game opponent whose unorthodox style allowed him to catch Johnson in a guillotine and then transitioned to a D’Arce choke in the first round. Despite the submission looking tight, Johnson gave a thumbs up to the referee to signify he was OK and able to continue fighting on.

“He blitzes on you. I stayed composed like a champion. I knew my grappling would be the best way to beat him.”

Elliott who earned the shot by winning the 24th season of “The Ultimate Fighter,” dropped Johnson with a left hand later in the round. Despite Elliot producing one of the strongest starts against Johnson during his historic title reign, it was “Mighty Mouse” fight from that point on.

Elliott showed heart and drew a positive response from the crowd with his unorthodox striking but was badly out-wrestled by the champion.

Fightmetric stats puts Johnson dominance into sharp focus, as he was credited with five of six takedowns and 16:52 of control time. Johnson spent the majority of the fight in top position, landing elbows and short punches while putting on a clinic on how to breakdown your opponent in an MMA fight.

“Man, I know I can get in there with anybody and compete,” Elliott said. “Even this fight, even though I was down when the time ran out, if it’s a fight to the death, I beat everybody.”

After passing one of the toughest test of his four-year flyweight title reign, Johnson moves into a tie with former UFC welterweight champion Georges St-Pierre for the second-longest title reign in UFC history. Which puts him one win away from tying the all-time record of 10, held by former middleweight champion Anderson Silva.

When asked after the fight where would he would like to tie Silva’s record the champion very frank about where he wants the fight to take place.

“Vegas!!” Johnson said swiftly “Always Vegas I love Vegas – because it’s the same time zone I live in and stuff always open after I fight and I have no desire to fight on the East Coast because I don’t want to fight at 1 o’clock in the morning.”

So what’s next for the man many consider the best pound-for-pound fighter in the UFC.

Many people believe it will be a trilogy fight with Joseph Benavidez, who won his sixth straight fight Saturday by defeating Henry Cejudo by split decision. Johnson has defeated Benavidez twice, in 2012 by split decision and 2013 by knockout.