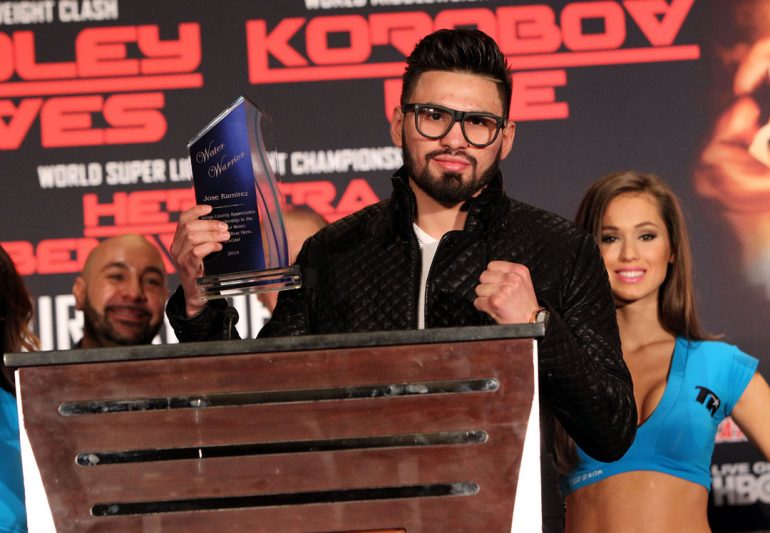 FRESNO – Jose Ramirez was not about to disappoint the largest crowd to watch a fight card near his hometown.

Ramirez overcame a controversial knockdown to stop late-sub Issouf Kinda in the sixth round before an announced crowd of 13,700 at the Save Mart Center.

Ramirez was scheduled to fight Gabriel Bracero, but Bracero reportedly was not in training camp, prompting Top Rank to look for an opponent before settling on Kinda.

Kinda scored a knockdown of Ramirez early in the second round. Ramirez protested the knockdown to referee Marcos Rosales, claiming Kinda pushed him down to the canvas.

The knockdown seemed to make Ramirez more the aggressor, walking down his opponent. The tactic worked as Ramirez was able to score with right hands to the body, followed by right uppercuts to the head.

Kinda attempted to catch Ramirez with counter or lead right hands, but was unable to get any leverage of his punches.

Ramirez scored a knockdown early in round six, landing a left hook to the body. Kinda was able to beat the count, but Ramirez battered him against the ropes, forcing referee Marcos Rosales to stop the bout at 58 seconds.

“Kinda had a tight defense,” said Ramirez after the fight. “I had to be patient. I was finally able to deliver that body shot that dropped him.”

Junior middleweight Danny Valdivia survived a third round knockdown to win a hard-fought eight round unanimous decision over Aaron Garcia.

Valdivia dominated the opening round, beating Garcia to the punch with repeated shots to the head.

It looked like it was going to be an early night for Valdivia as he dropped Garcia with a counter left hook to the head midway through the second round. Not to be outdone, Garcia dropped Valdivia with a right hand to the head in the third.

Both fighters thrilled the crowd during the middle rounds with repeated exchanges in the center of the ring.

Valdivia scored a knockdown with about 30 seconds left in round six, courtesy of a counter right hand to Garcia’s head. Both fighters looked spent during the final two rounds, but Valdivia solidified his victory by dropping Garcia with less than a minute left in the final round, this time with a left hook to the head.

“My best punch during the fight was my right hand,” said Valdivia after the fight. “That right hand was the difference. Garcia’s a tough guy.”

“He was faster than me,” said Garcia.

Lopez, who had to deal with a cut over his left eye from the second round, had his best round in the fourth, landing repeatedly to Madera’s head. But he was dropped twice during the fight by Madera, once in the third and once in the fifth rounds.

All three judges scored the bout 59-53 in favor of Madera.

Unbeaten middleweight and 2012 Olympic Silver medalist Esquiva Falcao (15-0, 10 KOs) was stunned at the end of round seven, but still did enough to win a unanimous decision over late-sub Luis Hernandez.

After Falcao swept the first half of the fight. Hernandez pressed the action, getting on the inside of Falcao’s guard. Both fighters produced solid exchanges to the delight of the crowd. Falcao was hurt late in round seven, forcing him to hold on until the bell sounded to end the round. To his credit, Falcao pressed on, momentarily stunning Hernandez midway through round eight.