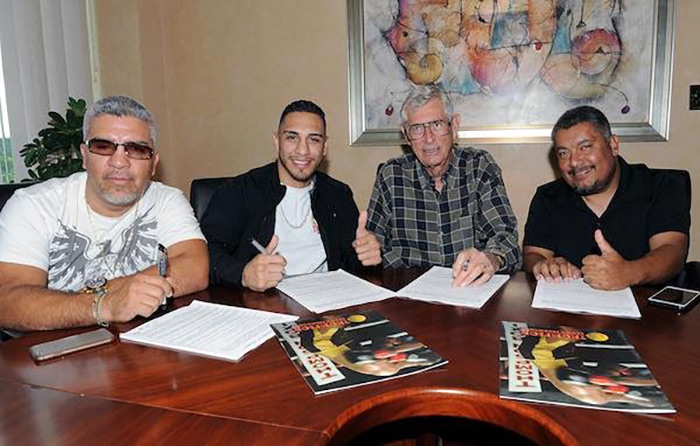 Thompson Boxing and Mendez had a tentative deal in place for several weeks but made the signing official when both sides signed contracts at the offices of Thompson Boxing in Orange, California.

“It’s a big load off my shoulders to sign with Thompson Boxing,” said Mendez, who is trained by Joel Diaz in Indio, California. “It was a proud moment for myself and my team.

“I’m dedicated to the sport. (Thompson Boxing) knows every time I step into the ring that I’m going to be ready to win. I think that’s what got their attention. That and I stopped a lot of the opponents they put in front of me.”

“Manuel has a fan-friendly style,” said Ken Thompson, who is the president of Thompson Boxing Promotions. “Fans love watching him come forward and go after knockouts.”

Mendez (13-1-2, nine knockouts) has fought his last eight bouts on Thompson Boxing cards. His third round knockout win over 2012 Olympian Cesar Villarraga of Colombia raised his profile among lightweight prospects in Southern California.

Mendez scored his most-impressive win to date in his last bout on Nov. 4, knocking out Vitor Jones Freitas in the opening round. Freitas is the nephew of former world champion Acelino Freitas.

Despite the quick knockout in the Freitas bout, Mendez has been known to wear down his opponents.

“Manuel is an exceptional puncher that has the ability to wear down opponents,” said Alex Camponovo, who is the general manager and matchmaker of Thompson Boxing.

The 26-year-old Mendez has not loss since losing his pro debut in October of 2010.