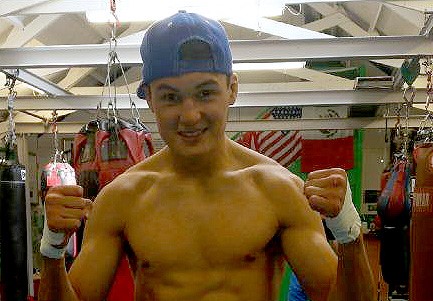 Two years ago, few could have imagined John Thain being in the position he is today. The Filipino-Scottish boxer from Edinburgh, Scotland closed out the year of 2014 on the back end of losing two straight fights, his deal with promoter Frank Warren and, seemingly, his passion for the sport.

That he now finds himself set to challenge Bradley Skeete for his BBBofC British welterweight title this Friday at the Brentwood Centre in Brentwood, England, can be attributed to Thain’s refusal to give up. Thain credits those closest to his career in not giving up on him as well.

“I was on a losing run. I didn’t feel like I loved boxing anymore. I didn’t give up but the key factor as well is that they didn’t give up on me,” said Thain (16-2, 1 knockouts), about his trainer Terry McCormack and his supporters at the Lochend Boxing Club.

“They could’ve said, ‘Look John, this isn’t your place to be anymore. You don’t suit boxing. Maybe you should try something else,’ but they didn’t. They stuck with me and they kept working with me.”

The 29-year-old Thain retooled, aligned himself with promoter MGM Scotland and began on the road back, winning four straight bouts before topping the 13-1 Nathan Brough by unanimous decision in October to earn a mandatory shot at Skeete’s British title, which headlines a BoxNation televised card.

(RELATED: For John Thain, the journey is the destination)

The odds weren’t ever in Thain’s favor to rebound from his slump and they’re not pointing in his direction against Skeete (24-1, 11 KOs) of London, a fighter two weeks older and one inch taller than Thain at 6-foot-1. Skeete also hasn’t lost since November of 2014, when he dropped a competitive decision to former world title challenger Frankie Gavin and has since won six straight against respectable opposition.

Skeete won the British title earlier this year with a unanimous decision victory over Sam Eggington and looked sharp against the overmatched Alexandre Lepelley, outboxing the shorter fighter before blasting him out with digging body shots in the seventh round.

Skeete is already rated No. 4 by the IBF and No. 5 by the WBO. That few are picking Thain to pull the upset alleviates pressure from Thain heading into his biggest fight to date.

“I think that people are quick to disregard my skills,” said Thain, who sparred 2012 Olympian Josh Taylor and unbeaten Scottish junior welterweight Lewis Benson to prepare for Skeete. “There’s no pressure on us to win this fight. We’re not everyone’s pick to win this fight. We know that. That means we have less people to please. I don’t put any sort of pressure or any sort of expectations on myself.

“As long as I work as hard as I can, I just line up my skills next to him and that’ll make me come out on top.”

Both Thain and Skeete rely heavily on their jabs and movement. Skeete has fought the better opposition, has more power and has fought in four 12-round scheduled fights.

Whether it becomes a battle of the jabs, which it seems destined to be at some point, or if they’re “gonna dig deep,” as Thain says he’s prepared to, he’s comfortable and confident in knowing he’s put in the best preparation he possibly could.

“It’s an experience. It’s not just for me; it’s for everyone that’s been on the journey from the start, that have experienced the ups and downs. It’s gonna be a good day for all of us,” said Thain.