Heavyweight Alex Stewart, who once fought Tyson, has died. 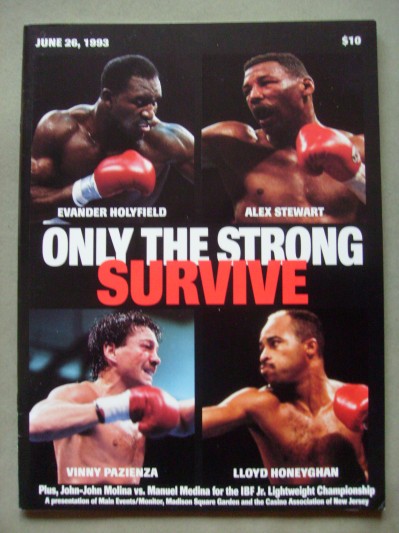 Alex Stewart, who battled many of his era’s top heavyweights, including Evander Holyfield, Mike Tyson and George Foreman, who he nearly beat, has died at the age of 52, according to the Associated Press.

Stewart’s friend, Mike Gilberg, told the AP that Stewart died last week from a blood clot in his lung after he was taken to a Mount Vernon hospital. “One day he wasn’t feeling good, the next this happened,” Gilberg told the AP.

Stewart had a reputation as a dangerous puncher, and he vaulted to prominence knocking out his first 24 opponents before he ran into Holyfied, then a rising heavyweight who was a year away from knocking out Buster Douglas for the WBC/WBA and IBF titles. Though he had his moments against Holyfied, he was ultimately stopped in the eighth round for the first loss of his career.

Two wins later on Dec. 8, 1990, Stewart ran into an angry Tyson, who had recently been upset by Douglas earlier in the year and didn’t waste any time venting. After staying upright against Holyfield, Stewart was knocked down in the opening seconds of the first round by a looping overhand right and dropped two more times before it was stopped at 2:27 of the frame.

Stewart rebounded with an impressive performance against Foreman on April 11, 1992, rising from two knockdowns to punish Foreman, whose face was badly swollen after eking out a majority decision win in his comeback bid. Stewart would face and lose to Holyfield again, as well as Michael Moorer, Oleg Maskaev and Lance Whitaker in a well-traveled career. He finally retired after his loss to Jorge Luis Gonzalez on June 6, 1999, finishing his career with a record of 43-10 with 40 knockouts.

Stewart was raised in Jamaica and represented the Island country in the 1984 Olympics. According to Gilberg, he worked as a driver and later in a warehouse constructing boxes for a liquor distributor after he retired. Stewart is survived by his wife, Angella and a daughter, Ajay-Tenille, the AP said. Services will be held Nov. 29 at the Pelham Funeral Home in Pelham, New York, according to the AP.