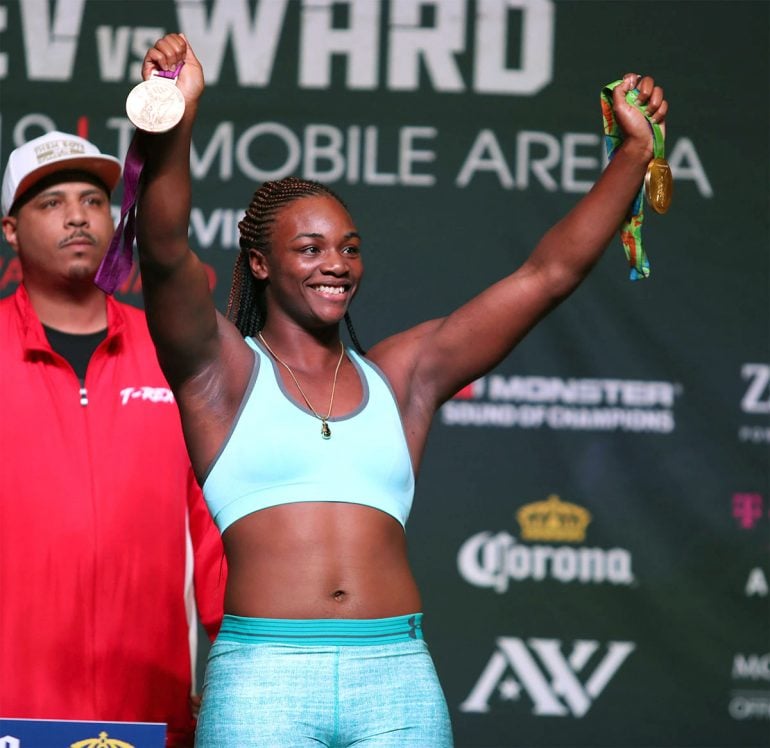 Crews charged out of her corner throwing looping left and right hooks while Shields stayed composed and landed her own counter left hook flush. Both fighters kept up the frenetic pace for much of the round with Crews getting tagged with the harder shots. Shields outworked Crews, who started to show signs of fatigue and fought with her mouth open the rest of the way.

In the second round Crews shoved Shields down to give herself a breather. Shields got back up crunched her face showing some anger and proceeded to attack and bring the pressure to Crews who started to retreat. Both women landed hard shots in the round but Shield’s counter left hook and quick right hand seemed to have more pop.

Crews seemed to have run out of gas in the third round and Shields was able to show the boxing skills which made her the most decorated female boxer in U.S. amateur history and the only one, male or female, to successfully defend their gold medal.

Crews went for it in the last round trying to land something big and Shields responded with a resounding right hand which stopped Crews dead in her tracks. Throwing defense by the wayside, Crews became an easy target for Shields in the last minute of the round.

The 21-year-old Shields opted to turn professional rather than pursuing a third gold medal at the 2020 Tokyo Games. Shields’ story of growing up, oftentimes without food or shelter, has become a human interest story transcending boxing since she captured gold both at the 2012 London Games.

Shields earned $50,000 for her pro debut tonight, according to the Nevada Athletic Commission, and her goal is to be the first female boxer to fight primetime on Showtime or HBO. The team behind Shields chose a strong opponent for her debut in Crews. Having faced and defeated her three times as amateurs, Crews was an alternate for the U.S. Team both times when Shields won the gold. Immediately following the bout, Shields left the ring and ran into the waiting arms of her parents and very loud cheering section with HBO Sports head Peter Nelson looking on a few feet behind.

22- year-old featherweight Tyler McCreary (12-0, 6 KOs) cruised his way to an uneventful six-round majority decision victory over Vincent Jennings (5-3-1, 4 KOs). One judge scored it even at 57-57, while two other scorecards had it for McCreary, 59-55 and 58-56, much to the chagrin of the fans in attendance who did not care for McCreary’s unwillingness to engage. The Toledo, Ohio, native and Roc Nation Sports prospect chose to move around the ring rather than to box until the final round when Jennings landed a body shot to hurt McCreary. McCreary smothered Jennings up and landed a few short left hooks to keep the Michigan native at bay.

Another Roc Nation Sports prospect, Sonny Fredrickson (15-0, 9 KOs), won an eight-round unanimous decision victory over Gabriel Deluc (11-2, 2 KOs). The official scores at ringside were 78-71, 77-75 and 78-74. The tall and lanky Fredrickson, a five-time Ohio Golden Gloves champion, controlled the pace of the bout with his jab, which was aided by his three-inch reach advantage. Deluc, the Bostonian, tried to get on the inside underneath the jab but was unable to find an opening and his face became worse for the wear as the bout went on. Fredrickson opened up a cut over Deluc’s right eye in the fifth with a clash of heads and then proceeded to punish Deluc with a series of counter left hooks which made Deluc spit out his mouthpiece twice. The 21-year-old Fredrickson is a tall junior welterweight and his 6 foot 2 inch frame has not fully filled out yet.

Bakhram Murtazaliev (7-0, 5 KOs) scored a second-round TKO victory over previously unbeaten Botirsher Obidov (6-1-1, 2 KOs). The official time of the stoppage was 2:50. Murtazaliev, who is a close friend of Sergey Kovalev and from the same hometown of Chelyabinsk, dropped Obidov, from Uzbekistan, three times in the second round. The first knockdown came in the form of a well timed left hook. Obidov got up rather quickly. The second knockdown was a result of a vicious counter left hook. This time Obidov got up much slower and didn’t seem to recover, as moments later Murtazaliev leveled Obidov with a straight right hand. Referee Vic Drakulich quickly waved the bout off and called for the ringside physician to come inside the ring. Earlier this year Obidov upset the former Ukrainian amateur standout Ramil Gadzhiev. This was Murtazaliev’s first bout outside of Russia.

In the opening bout of the evening, Main Events prospect Meirim Nursultanov (1-0) defeated Henry Beckford (4-6, 1 KO) by a six-round unanimous decision in his professional debut. All three judges at ringside scored bout 60-54. Nursultanov was the 2014 Kazakhstan National Champion and makes his home in Oxnard, California, where he trains with Robert Garcia. Beckford had no answer for Nursultanov’s right hand as it found a home early and often. After Beckford was warned for holding twice in the second round, Nursultanov picked up the pace and started putting his punches together, stunning Beckford as the round came to an end. Nursultanov hurt Beckford again in the third and fourth rounds but his awkward style coupled with big looping right hooks couldn’t put Beckford away.