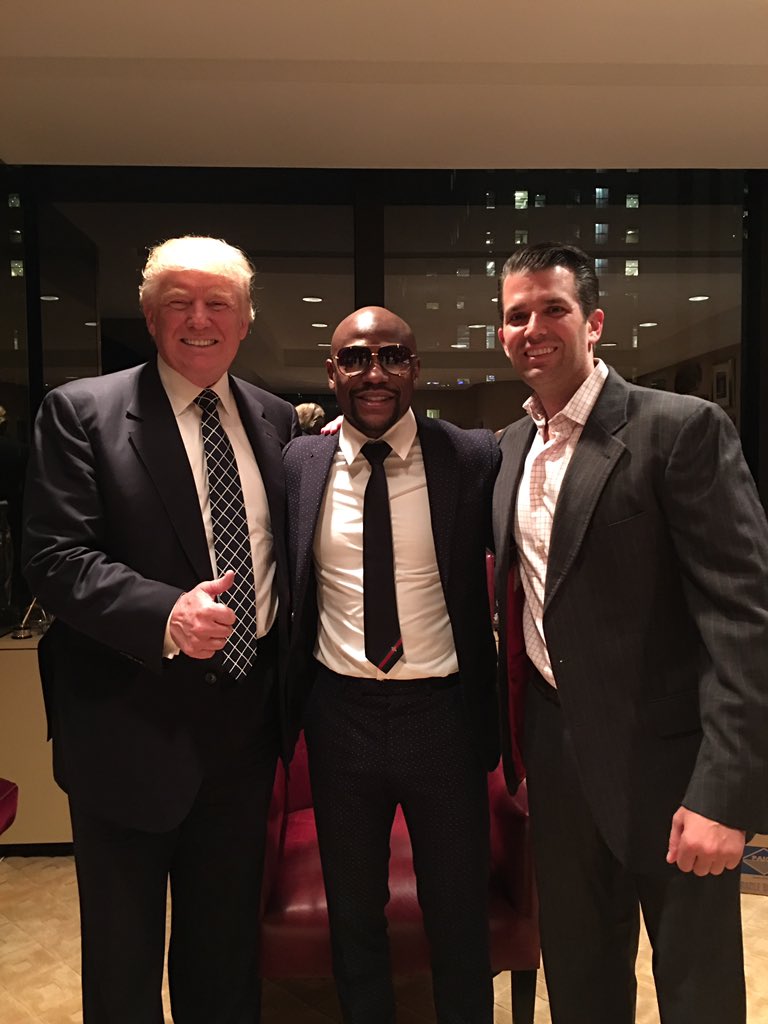 Floyd Mayweather Jr. finally found someone with a bigger ego than him.

Following a press conference in Brooklyn on Wednesday, a nattily dressed Mayweather headed uptown and met with President-elect Donald Trump at his Trump Tower digs in Manhattan. You’d think Trump had better things to do — such as decide who’s going to fill key positions in his administration (Mayweather, an extraordinary defensive fighter, possibly a candidate for National Security Adviser?). But the real estate mogul found time to hand-grab with Mayweather and pose for a picture, which Donald Trump Jr., who is also in the portrait, then posted to social media.

“Had a great visit from @FloydMayweather today with @realdonaldtrump. One of the best all time boxing legends,” Trump Jr. tweeted. Mayweather is wearing the same outfit he sported earlier in the day during an appearance to hype a big super middleweight unification fight between James DeGale and Badou Jack for the RING, WBC and IBF titles on Jan. 14 at Barclays Center in Brooklyn on Showtime.

Donning shades and a navy-blue suit, the recently retired Mayweather is sandwiched between the two Trumps in the photo-op. Everyone looks happy: the President-elect is giving a thumbs-up while son Donald Jr. is beaming with pride. Apparently, someone in Trump’s transition team is close to Mayweather, 39, and arranged the appearance. Mayweather then attended Wednesday night’s Knicks-Pistons game at Madison Square Garden.

Trump, of course, is a boxing fan who was present for Mayweather’s victory over Manny Pacquiao last year, and he has hosted a number of fights at his hotel casinos over the years and maintains friendships with fighters, such as Mike Tyson. It’s not clear if the five-division champion Mayweather is a Democrat or a Republican or if he even voted, since he seldom makes political statements, and he didn’t discuss the meeting with reporters during his press-conference appearance earlier in the day.