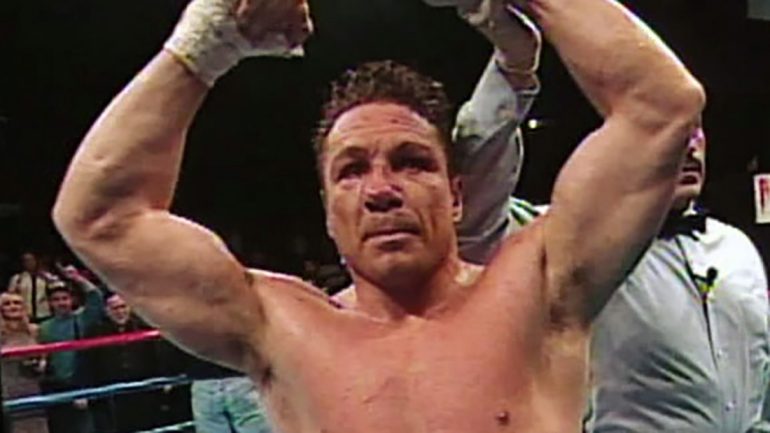 Vinny Paz (formerly Pazienza) fought many of the best fighters of his era over the course of two decades, winning world titles in two weight classes along the way. During his career the popular New Englander showed considerable grit and resolve inside and outside the ring, eventually inspiring a motion picture about his life.

Paz was a successful amateur boxer, regularly fighting on TV, before turning professional in the summer of 1983. He quickly became a hometown favorite in Providence, Rhode Island, building a 22-1 record within four years, before he challenged Greg Haugen for the IBF lightweight crown. There was real animosity between the plucky pair. 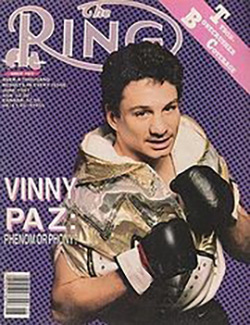 “I hate him, I can’t stand the punk,” Paz told RingTV.com. “I remember I was sick as a dog that day. I lost so much weight. I really wasn’t a lightweight. After the weigh-in I was gorging everything and got crazy sick, vomiting, diarrhea, then I fought him that afternoon. I beat him in the last three rounds of a 15-round fight.”

He recalls after winning the world title by unanimous decision in front of his fans he went out and enjoyed his success (perhaps a little too much).

“The second fight, I didn’t do what I’m supposed to do,” he said. “I lost 13 pounds the day before weigh in and he just kicked my ass, he had a great night.”

The self-styled “The Pazmanian Devil” migrated to 140-pounds, losing to world title attempts against Roger Mayweather and Hector Camacho before winning his rubber-match Haugen.

After a third world title attempt when he unsuccessfully took on Loreto Garza in late 1990 he decided to move up in weight again, settling at junior middleweight. Many considered him to be past his prime.

However, after winning the USBA title he was able to coax unbeaten 154-pound beltholder Gilberto Dele to come to face him in Rhode Island.

Paz was ahead entering the final round but took matters out of the judges’ hands with a terrific late stoppage win.

“I think that’s the best fight I had. I won the junior middleweight title, I was the second fighter in the history of boxing to do that (win titles at 135 and 154 pounds), [Roberto] Duran was the number one…It was a great moment.

“They wrote me off and RING magazine gave me Comeback of the Year, it was pretty cool,” he said.

Little did Paz now that his biggest challenge lay ahead of him.

“I was going to the gym in the day,” he said recalling events of Nov. 12. “My friend was driving, someone cut him off, he hit the breaks and we slide into the next lane and I literally held on to the side door handle and I thought to myself, ‘Oh my God, I’m never gonna defend my world title,’ and bam we got smashed by a big town car.

“I woke up later that day and the doctor was talking to me and he was giving me all sorts of details and I just said, ‘Doc, can I fight again or not?’ and he said, ‘No son, I’m sorry to say you’re not going to fight again,’ he said, ‘You should be happy if you can walk.’

“I freaked out, banging my arms and legs, my left side was numb, I didn’t want to tell him. My mother and sister were in the room and started crying.

“Doctor Carter, he was a good surgeon. He knew I wanted to fight again so he gave me the chance to do it and didn’t put rods in my neck. What they normally do is put a rod on the bones and that’s it you can’t move [your neck freely] again. So I wouldn’t have been able to fight again. He was nice enough to do it, ‘cause I was out of it, he put the halo on me.”

Miraculously within a week he was home…and planning his comeback.

“I walked downstairs in my house to a little gym and I started fooling around with the weights. I thought I was on to something,” he said.

After 13 arduous months Paz incredibly stepped foot inside a ring again beating future WBC titleholder Luis Santana. Unsurprisingly he says of that fight, “One of the greatest moments of my life.” 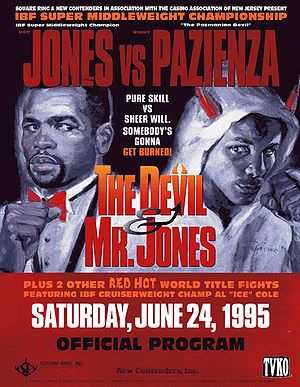 Five more wins followed including a stoppage over Lloyd Honeyghan before he met his idol Roberto Duran. They fought twice, Paz winning each time on points.

In the summer of ‘95 he challenged rising superstar Roy Jones Jr. for the IBF super middleweight title. This was one miracle he couldn’t perform and was stopped in six rounds.

“I had a bad night against Roy Jones Jr. and I didn’t want people to think I was done. So I came back and fought and undefeated kid from Boston, Dana Rosenblatt, and I knocked his ass out the first time.”

The Rosenblatt victory proved to be his last great night, he contended for several more years even unsuccessfully challenging Eric Lucas for a version of the 168-pound world title.

On Nov. 18 the motion picture “Let it Bleed” will be released. Miles Teller plays Paz and Aaron Eckhart his trainer Kevin Rooney. Famed director Martin Scorsese is the executive producer. The story chronicles the highs and lows of his extraordinary journey.

“It’s going to be an iconic moment. Martin Scorsese is the best of the best. The movie is gonna be outrageous,” he said proudly. 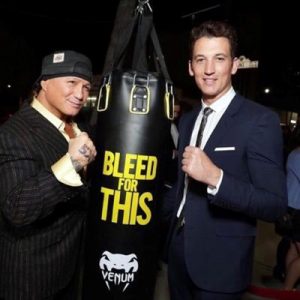 “I hope everyone goes to see the movie, ‘cause it’s gonna be remarkable and it’s gonna be very inspiring, it’s gonna give a lot of people courage and faith. I’ve won five world titles, (won) 50 fights but the best thing I did was come back from breaking my neck and show people you can get off your ass and do what you’ve got to do even when you’re told you can’t, if you believe, most of the times you can do it.”

“Things are good,” he said. “I spend time with friends, going to the bar… the strip club every now and then [laughs].”

Paz agreed to speak about the best fighters he fought in 10 categories.

BEST JAB
Roy Jones Jr.:
There were quite a few guys who had a great jab, Greg Haugen was one, Hector Camacho was another his jab was fast as lightening, Roger Mayweather, Roy Jones Jr., always the great Roberto Duran, he had that little short quick jab. I would have to say Roy Jones Jr. was the best. 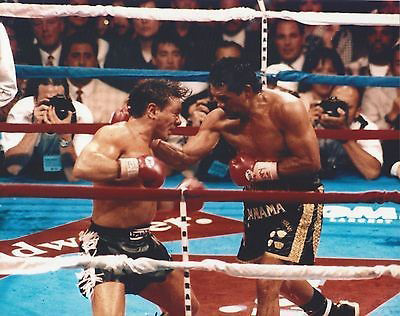 BEST DEFENSE
Roberto Duran: When I fought Duran he was in his 40s and I couldn’t believe how difficult a time I had hitting him in the beginning of the fight. I thought to myself, he must have been a beast [in his prime]. I followed him his whole career, I loved him, when I fought him he was older, he was hard for me to hit in the first four or five rounds and when the age caught up with him, you get older each round when your older, but he was a great defensive fighter. That’s the only reason he stuck around the game so long.

BEST CHIN
Duran: ‘Cause in the second fight, he got old in the months between the fights. He slowed down a lot in the second fight and I was hitting him with bombs and I can hit. It was like hitting an Oak tree. [When asked if he was glad he fought the older version of Duran, Paz responded: “Absolutely (laughs), I don’t need that sh_t in my life!”] 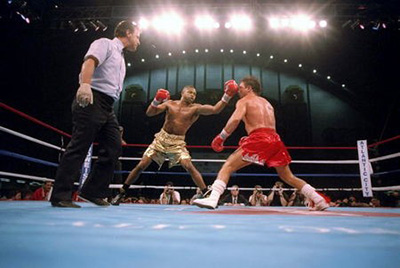 FASTEST HANDS
Jones Jr.: Jones was fast as hell, Hector Camacho was fast as lightening, at the time I fought Roger Mayweather he was fast as lightening. I fought a lot of fast guys. Roy was so fast. It was a bad night for me, people don’t realize (they think) you get in there and it’s all dandy, it’s not like that. There’s fighters that go in there with flu, colds, you’re not ready, it was a bad me and it was a great Roy Jones. Jones was at his best and I couldn’t get out the way of anything.

SMARTEST
Duran: I was hitting him with combinations and all of a sudden “Boom” he sends one to my nuts, that stopped everything, I took a knee and I don’t take a knee for anybody, the pain was one of the most I felt in the ring. That’s experience, he knew he’d stop (with) that and he did. 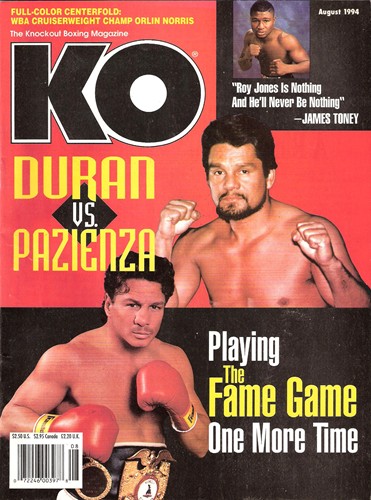 STRONGEST
Duran: Duran was strong as hell, it was like trying to move an Oak tree.

BEST PUNCHER
Duran: He hit me and I was like, “What the f__k!” Real, real heavy handed. I’ll never forget the first time he hit me with a body shot, I was like, “I’ve got to take this for 12 rounds!? Oh my God!.” He was the best lightweight of all time. That’s incredible, what a statement. I joke around when I see Duran, I say, “You hit me the hardest and you were 90 when I fought you!,” he starts cracking up.

BEST SKILLS
Camacho Sr.: Hector Camacho was so hard to hit because he was left handed and real slippery, he had great boxing skills because he was so fast.

Anson: I need you to outright pick who the best overall you faced was, otherwise my editor will kick my ass.

Paz: Looks like you’re getting your ass kicked! [Laughs]