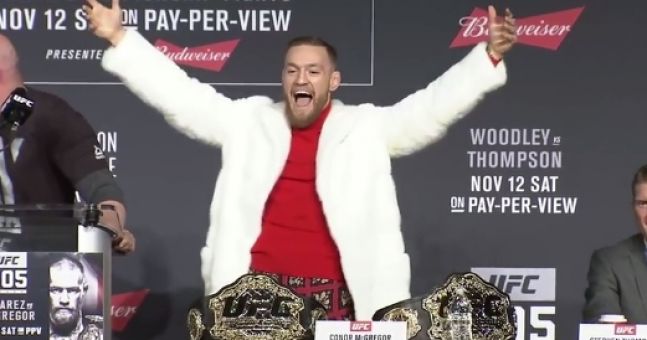 With a couple of well-timed precise strikes with his famous left-hand Conor McGregor made UFC history at the organization’s first show in New York City.

McGregor, who holds the UFC’s featherweight title, knocked out Eddie Alvarez at 3:04 of the second round to become the lightweight champion and the first fighter in mixed martial arts history to hold multiple UFC titles at the same time. The win not only solidifies McGregor’s growing legacy, but it made the popular Irishman, AKA “Mystic Mac,” look like a prophet again as he has been telling anyone who would listen since the day he signed with UFC that he would do what he did on the biggest stage in the promotion’s history.

McGregor (21-3) slipped a loaded punch and dropped Alvarez with a quick combination similar to the way he disposed of Jose Aldo last December. Referee John McCarthy gave Alvarez a chance to recover, but it was very clear the former champion was finished, and it didn’t take much more from McGregor before McCarthy to step in and stop the fight.

Alvarez (28-5), a former Bellator MMA champion with one of the most decorated resumes of all-time at 155 pounds, simply couldn’t handle the power and precise punching of McGregor despite getting up off the canvas after dropped three times in the first round. Once McGregor got the Philadelphia native to over-commit multiple times on punches it was only a matter of time before Alvarez got added to McGregor’s growing highlight reel.

At the post-fight news conference, McGregor announced he is expecting the birth of his first child in early May. The “Notorious” one intends to take a break until then, and expects the new owners of the UFC at WME-IMG to reach out to him in the meantime.

“Have this baby, take a little bit of time and see what way I feel after that,” McGregor said. “They’ve got to come talk to me now. No one has come talk to me since the sale [in July] happened — as a businessman.

“Who owns the company? People have shares of the company, celebrities. Conan O’Brien owns the UFC these days. Where’s my share? Where’s my equity? If I’m the one bringing this, they’ve got to come talk to me. That’s all I know. You want me to stick around and keep doing what I’m doing? I want what I deserve. What I’ve earned.”

After watching McGregor defeat of another solid opponent in easy fashion, UFC president Dana White agreed that McGregor is special and basically plays by his own rules.

“This ain’t hype. This is real, man,” White said. “Everybody said that the kink in his armor was wrestling, and when he meets a guy who can wrestle he’s in big trouble — not one take down tonight. Defended everything.

After shining brightest of all the stars on another big stage Saturday night and setting another gate record of 17.1 million, one thing is becoming abundantly clear, these days, the UFC needs Conor McGregor more than Conor McGregor needs to the UFC.