Martin Murray has new opponent in Lawal for Saturday 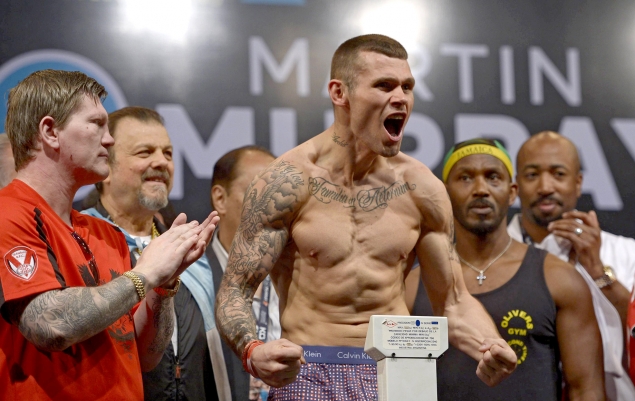 The carousel of opponents for super middleweight Martin Murray has finally stopped on Nuhu Lawal.

The four-time title challenger will face Lawal on the undercard of a show headlined by Luis Ortiz’s heavyweight fight with Malik Scott at the Salle des Etoiles in Monte Carlo, it was announced on Thursday by Matchroom Boxing. Murray (33-4-1, 16 knockouts) has had a devil of time securing an opponent for his first fight since he dropped a decision to George Groves in June.

He was supposed to face former titleholder Arthur Abraham in a rematch but Abraham pulled out with an elbow injury. Then England’s Murray was targeted to face Russia’s Dmitrii Chudinov, a former secondary titleholder. But soon Chudinov dropped out due to a virus, opening the door for Lawal (23-0, 13 KOs), who last fought on July 2, knocking out Istvan Szili in the sixth round in his adopted home of Germany.

Murray admits the bout with Groves was a humbling experience but it hasn’t dampened his determination to win a world title. He blames an illness in training camp to affecting his preparation and performance in the bout. “The loss to George did take a lot out of me though,” Murray said in a press release. “When I lost to George the goal of becoming World champion slipped away a bit but the desire and hunger is still there and I know I am only one win away from getting another shot.”

Murray, despite his previous attempts to win a title and at 34, was almost defiant in his belief he has plenty of prime years ahead of him. “I am far from done as a fighter, it’s just not worked out right for me,” he said. “When we do nail it, we know that the wins against the big names will be there. I believe that I can beat the world champions at super middleweight.”