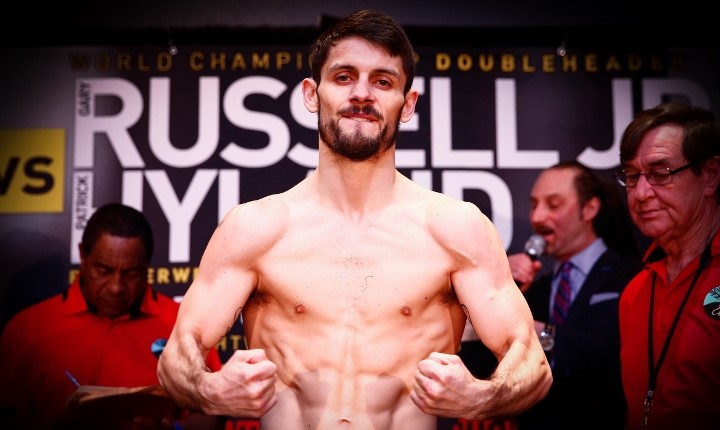 There are occasions when defeat can ruin a fighter.

Think Bernard Hopkins schooling Felix Trinidad. Think Marco Antonio Barrera knocking the crown off Prince Naseem Hamed’s head. There are scores of examples but a setback can also be the prelude to a comeback and British junior lightweight contender Stephen Smith adopted that approach quicker than most.

Last April, Smith challenged Jose Pedraza for the IBF 130-pound title and was acquitting himself well before being decked by a right hand in the ninth round. Pedraza went on to secure a well-deserved unanimous decision but just, six weeks later, Smith was back in action, scoring a seventh round stoppage over a capable Daniel Eduardo Brizuela.

“I was just lucky that there was a massive show in my home city (Tony Bellew-Ilunga Makabu at Goodison Park soccer ground),” said Smith, who hails from Liverpool, England. “I would have been there anyway, supporting a good friend in (WBC cruiserweight titlist) Tony Bellew and I just thought, ‘Why not get the (Pedraza) loss out of my system and get back to winning ways against Brizuela?’

“I didn’t perform badly against Pedraza. I just fell short on the night. I think that little mistake in round nine cost me dearly. That’s a fight I can look back on in terms of my performance but I’m not going to be happy with falling short in a world title fight.”

On Saturday, Smith faces American pressure-puncher Jason Sosa (19-1-4, 15 knockouts) in Monte Carlo. The New Jersey native, who is rated No. 10 by THE RING at 130 pounds, hasn’t lost a fight in six years and is progressing nicely. His record since October 2012 is 14-0-1, 13 KOs, although the majority of his opposition has been undistinguished.

Last December, however, Sosa was put in at the deep end against Jamaica’s former featherweight titleholder Nicholas Walters. Sosa appeared to have fallen short – way short – but the judges somehow conjured up a 10-round majority draw. Bolstered by the result, if not the performance, Sosa returned in June and came from behind to stop the previously unbeaten Javier Fortuna in the 11th round.

“Stylistically, the Sosa fight suits me,” claimed the former British and Commonwealth champion. “The Pedraza fight was always going to be a very difficult matchup, a real skillset contest, and that was about brains. This fight is brains versus brawn because Sosa is a physically strong man. He relies on his punch power but I believe in my boxing ability and my boxing brain.

“I don’t want to go in there and have a punch-up because that would be playing to his assets. It’s my boxing ability that will win me this fight but I also believe that if I land cleanly on any junior lightweight in the world, I can hurt them. If he thinks he can stonewall through me, then I welcome the tactics because he’ll make mistakes and I’ll make him pay.”

While it’s obvious that Sosa can crack, he is also extremely durable. Fortuna had 22 knockouts in 31 victories, and barring a fifth-round knockdown, he didn’t come close to halting the American. Neither did Walters, who hardly comes under the heading of non-puncher himself.

Smith (24-2, 14 KOs) can pack a punch but his confidence obviously comes from the knowledge that he’s the better technician.

He said, “A lifetime’s work will pay off on Saturday night. I’ve been in the gym since I was eight or nine years of age and all of that has been geared towards me becoming a world champion. I honestly believe you’ll see the best of me after I’ve achieved that dream because it will be such a weight off my shoulders.

“Once I beat Sosa, it opens the doors to more big fights. I’ve got to provide as good a living as I can for my kids. They’re my life and I just want to do the best I can for them. The junior lightweight division is one of the best in the world right now because the best are fighting the best and long may it continue.”

The belt on the line is the WBA “regular” title, which is unrecognized by THE RING. Sosa claimed that strap when he stopped Fortuna and will be defending it for the first time against Smith.

In the garbled world of the WBA, Jezreel Corrales defends the so-called “super” title against Takashi Uchiyama in a rematch on Dec. 31. Corrales won the belt from Uchiyama with a shuddering second-round knockout in April and Smith expects the Panamanian to repeat that victory.

“I’m not a big fan of regular and super titles,” said Smith without prompting. “I didn’t train all my life to become a regular world champion or a super world champion. I think it’s nonsense. I’d like to achieve my dream by beating Sosa and then I’ll be pushing for (the winner of) that fight.

“I would want to get that out the way so that people can’t say I’m not a world champion. I don’t agree with having two (junior lightweight) champions with one governing body but I don’t make the rules. I can’t get caught up in that because I have a family to provide for. I’d like to clear things up and fight the winner of Corrales and Uchiyama.”

Refreshing indeed but the talented Smith most first overcome a dangerous and powerful foe in Sosa, who is determined to test him to the full.

Tom Gray is a UK Correspondent/ Editor for RingTV.com and a member of THE RING ratings panel. Follow him on Twitter @Tom_Gray_Boxing.