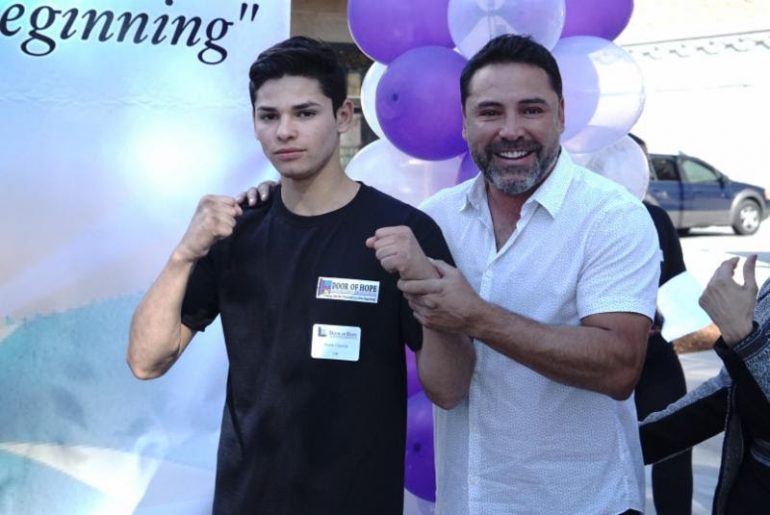 On the same day that former Golden Boy CEO Richard Schaefer formally announced the signing of 2016 U.S. Olympian Carlos Balderas, Golden Boy struck back with an intriguing signing of its own.

Golden Boy inked Southern California’s Ryan Garcia, a 15-time amateur junior national champion, who will make his promotional debut on the undercard of Bernard Hopkins farewell fight against Joe Smith Jr. on Dec. 17 at the Forum in Inglewood, California, the company announced on Monday.

The 18-year-old Garcia, a lightweight, just like Balderas, is already 6-0 with five knockouts after turning pro in June. His first four fights took place in Mexico since he was too young to fight in the U.S. According to a press release put out by Golden Boy, he compiled a record of 215-15 in the amateurs, including 15 junior national championships.

“I am so excited to announce that I have signed with Golden Boy Promotions,” Garcia said in a prepared statement. “My family and I grew up watching and admiring Oscar De La Hoya and to now be fighting under his promotional banner is a dream come true. I can’t wait to get back in the ring on Dec. 17 and start showing the world what I’m capable of.”

The announcement of the signing comes on the same day that Schaefer, a former CEO of Golden Boy, who resigned after a falling out with De La Hoya in 2014, also called a press conference to unveil the first signing of his newly formed promotional company, Ringstar Promotions. Now that Schaefer is back in business and operating out of Los Angeles, where Golden Boy is also based, it will be interesting to see how the two promoters deal with the other.

“Ryan Garcia is special — simple as that,” said De La Hoya, Chairman and CEO of Golden Boy in a press release. “His amateur pedigree is among the best I’ve ever seen; his skill set is far beyond his 18 years of age; and if you want to know how hungry he is — because he couldn’t fight professionally in the US until he turned 18 — he fought in Mexico four times before his birthday this year. I expect enormous things from Ryan and am excited to work with him as he embarks on a career that I’m sure will include multiple world championships.”