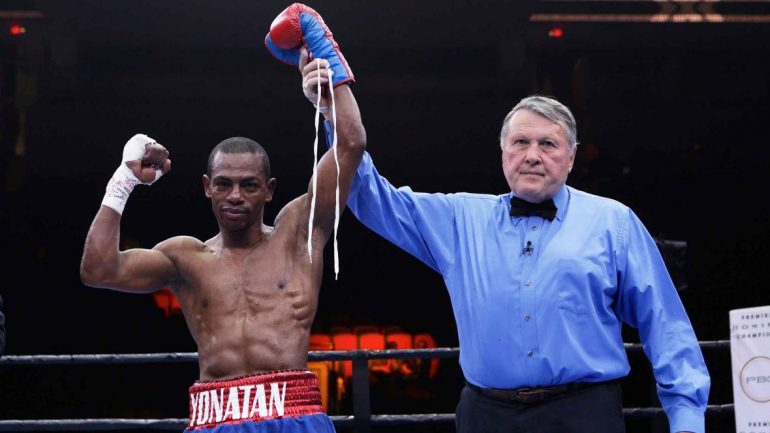 Guzman dropped the tough Japanese challenger four times en route to an 11th round stoppage. In doing so, he upped his perfect record to 22-0 (22 knockouts).

It was a significant win for the 27-year-old from the Dominican Republic, who became his country’s 19th world champion.

“It was a very tough fight, against an opponent in great physical condition and eager to win the title,” Guzman told RingTV.com through Carlos Gonzalez, “but I always felt positive and I knew that I was going to win the fight at any moment, by any means.”

It seems the heavy-handed boxer-puncher enjoyed the experience because he’ll return to the land of the rising sun, where he’ll look to make the  maiden defense of his crown against Yukinori Oguni on New Year’s Eve, at Kyoto’s Shimazu Arena.

“I think he is a boxer with a very good defense and very good movement and I am sure that he will give his best that night to win the fight,” Guzman said of his opponent.

“For me, it is an honor to visit again such a beautiful country and I hope to receive the same support from the Japanese people. They are all very caring.”

The deeply religious fighter was quick to offer praise to God and says he intends to make several defenses of his belt, while seeking a unification opportunity with one of the other titlists at 122-pounds.

His promoter is Sampson Lewkowicz, famed for his work with Sergio Martinez and a slew of other fighters of international distinction including Chris John, Anselmo Moreno and, at one time, a young Manny Pacquiao. The Las Vegas-based boxing entrepreneur believes his fighter has a high ceiling.

“Jonathan Guzman will be a star in boxing,” Lewkowicz stated. “In his 22 fights, no one could last the distance with him. Now he is a world champion, defending against a tough Japanese fighter, Yukinori Oguni, at the end of the year.

“The victory over Oguni will then set the stage for Jonathan to appear on the big networks in the United States and become one of the top names in boxing. I know he can do it and he will.”