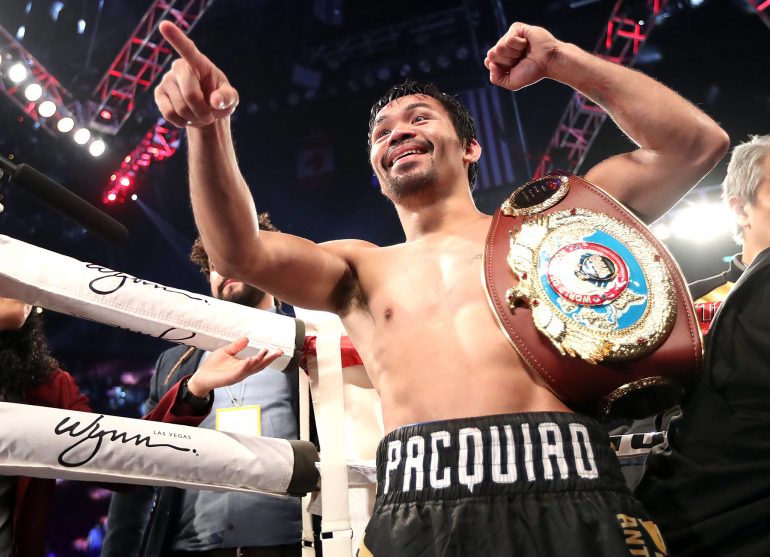 LAS VEGAS – The Honorable Emmanuel Pacquiao changed out of his Senatorial suit to once again become the boxing tornado Manny Pacquiao and prove why even as a part-time pugilist, he is still better than 80-90 percent of active fighters. Even at the age of 37, Pacquiao demonstrated the speed and power that made him a worldwide superstar and claimed the WBO welterweight title by defeating Jessie Vargas by unanimous decision in front of 16,132 at the Thomas & Mack on Saturday.

Don’t let the egregious 114-113 scorecard fool you, this was vintage Pacquiao as he darted in and out with awkward angles and scored a knockdown in Round 2 that put the exclamation mark on yet another exceptional performance.

Perhaps the bigger story was the special guest sitting ringside, Floyd Mayweather Jr., who took his seat and ignited any fleeting speculation of Maywether-Pacquiao 2 with a ton of gasoline.

It would be all for naught if Pacquiao didn’t handle Vargas, however.

Obviously, a knockout would have further fueled the possibility of a rematch of the richest fight in boxing history.

But on this night Pacquiao  couldn’t concern himself with the future. It was all about having a successful return to the ring after a brief retirement in April and seeing how well he could balance his career as a politician with the one that made him wealthy as a pugilist. 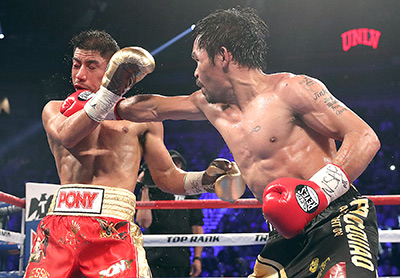 This certainly wasn’t the Pacquiao that rampaged through multiple weight classes in the late 2000s. But there were remnants of that fighter present against Vargas. The Filipino was crisp and effective with a significant speed advantage.

Although game, Vargas struggled to keep up with the active Filipino. After a relatively slow first round, Pacquiao woke the crowd up in the second round with a straight left hand that planted Vargas on the seat of his pants. Perhaps more shocked than hurt by Pacquiao’s blazing speed, it set the tone for the rest of the fight as Pacquiao made the Las Vegan pay every time he attempted to throw more than one punch.

With a heavily pro-Pacquiao crowd chanting his name, Pacquiao plucked and prodded Vargas throughout the 12-round affair. Vargas tried valiantly to catch the bumblebee, but was stung at every turn when he attempted to close the distance. Vargas did manage to land a few hard right hands, but none were enough to turn the tide. Undeterred, Vargas engaged in an exciting firefight with Pacquiao in Round 8 as each landed heavy shots. A hard Vargas right hand was answered with a trademark Pacquiao flurry and was punctuated by an overhand right as the round closed.

The round left Vargas with a cut over his right eye and kept Pacquiao from going into cruise control. The boxer turned senator appeared to have fun engaging with Vargas.

“I feel very happy,” Pacquiao said afterward. “I was trying every round to knock him down but I didn’t want to be careless because I know he’ll counter me. I feel like I could do more every round I tried to knock him out.”

As for Mayweather’s appearance ringside and whether that was a sign for a possible rematch, Pacquiao was non-committal on his future opponent. But one thing is for sure, Pacquiao will fight again.