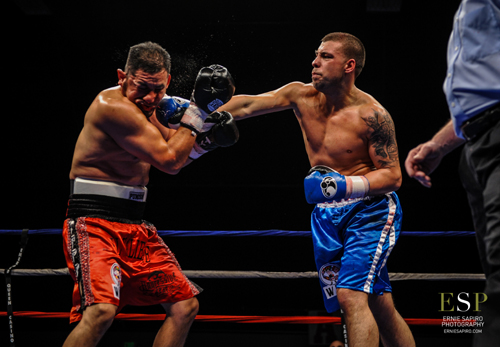 He is relaxed, confident, in shape, ready to rock and roll, in his “ShoBox” debut.

But New York’s Stivens Bujaj doesn’t want to give the appearance that he’s overconfident, while believing his edge in experience will carry him to a win Friday night, on Showtime.

Bujaj, a 26-year-old Albanian-born fighter with a 16-0-1 (11 knockouts) mark, was asked if he thinks it will be an evening of easy work against Constantin Bejenaru, in a California ring.

“Should be easy work,” he said, with a chuckle, “but I hate saying that because I don’t underestimate anyone. But I have the edge all around. I should stop him.”

Bejenaru, living in Brooklyn, sports an 11-0 mark. He has three stoppages versus 11 for Bujaj, who has faced better opposition, on paper, thus far. Last time out, in April, the lefty Bejenaru handled Alexey Zubov, via eight-round unanimous decision, on an off night for Zubov.

Bujaj is a solidly-schooled guy, has acceptable pop in both hands and likes to use both for power punches. He works mid-range and is cool and collected, staying chill working inside. “I’m going to fight hard and fight smart,” he told me of his ShoBox plan.

Colin Morgan will corner Bujaj, who worked with Sherif Younan and then Lou Del Valle to get ready. Bujaj found some sparring in Vegas but no lefties, to mimic Bejanaru, so he came home and worked with Staten Islander Marcus Browne.

He has worked in camps with Adonis Stevenson, Kryzstof Glowacki and Lucian Bute over the years, so we can see his prediction panning out.

Back to his perceived edges: Bejanaru likes to move, feint, feint, feint with a jab and Bujaj could maybe enjoy success being the stalker and popping with the lead right.

As per usual, ShoBox again offers early crossroads fights, opportunities for fighters of similar levels in record to clash and climb the ladder or go down a rung. Bujaj can hang at a world-class level and could snag himself a title crack soon afterward if he wins…so the stakes are not small potatoes. The show kicks off at  10:30 p.m. ET/PT and the main event will feature welterweight Taras Shelestyuk (14-0, 9 KOs) versus  Jaime Herrera (15-3-1, 8 KOs).

Michael Woods doesn’t underestimate anyone but he has the edge all around. You can thank buckets of coffee for that. Woodsy stops being edgy right around 5 p.m.