Could we see Gennady Golovkin vs. Manny Pacquiao in 2017? 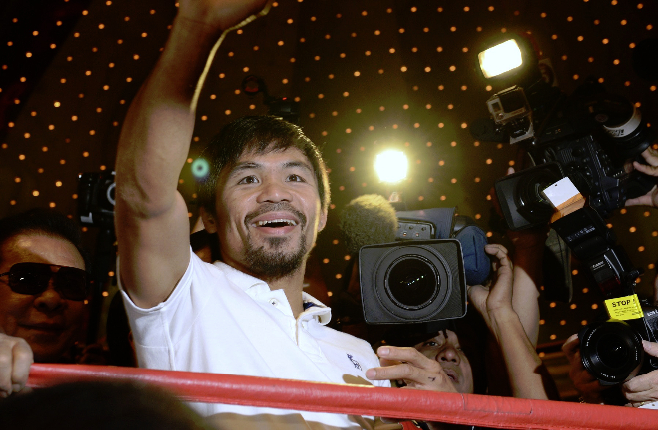 Boxing fans aren’t so good oftentimes at focusing purely on the present. We sometimes get ahead of ourselves and start pondering future face-offs before the one on hand has even occurred.

We’ve seen a fair amount of this as we tick down to the Nov. 5 return of Manny Pacquiao in Las Vegas, on pay-per-view, versus underdog Jessie Vargas.

Part of the speculation rash is present because Vargas (27-1, 10 knockouts, age 27) is a ‘dog with a capital D. He lost to Tim Bradley, handily, save for the final seconds of the last round. He was neck and neck with Sadam Ali when he took the vacant WBO 147-pound crown in March by pulling away and stopping the Brooklyner in the ninth. Boiled down, the widespread assumption is the Manny who slayed in his last tango, against Bradley, is a long level ahead Vegas’ Vargas. So, we rev our speculative engines…

“Let’s take it one at a time,” counseled “Pacman” promoter Bob Arum, CEO of Top Rank Promotions, on a conference call for media. “If Manny comes in and dominates this fight and looks like the old Manny, and wants to continue fighting, there will be certain opponents that will be considered. If he decides that it’s too much, juggling two careers, then he shouldn’t continue. If he is determined to continue and his performance suffers because of his work in the Senate, I would have to look in the direction of somebody else for an opponent. So to jump now about names and so forth, who knows? Manny may look so good in this fight and may have such senatorial presence in the fight that we may be looking for (IBF/WBA/WBC middleweight titlist Gennady) Golovkin next. And if he doesn’t vote right in the senate, I think some of his constituents may be urging him to fight Golovkin.”

The 58-6-2 (38 KOs) Manny, who has the metabolism of a hamster on speed, who could make 135 if he wanted to, without straining and draining too badly…

Was Arum huffing and puffing and pulling legs? I think so, by his tone. But just to be sure…

What about it, K2 Promotions Managing Director – and Golovkin promoter – Tom Loeffler? What’s his take on a Golovkin vs. Pacquiao match?

“I’m pretty sure Bob was joking and using ‘GGG’ as an example of the toughest fighter out there,” Loeffler told RingTV.com.

Yeah, file this hypothetical as a concept that would never exit the sphere of conjecture. Pacquiao (who turns 38 on Dec. 17) can handle abuse and trauma. He’s a boxer/politician, after all. But his frame isn’t built to rumble with a middleweight bonecrusher.

UPDATE: I was pulling your proverbial legs, boxing promoter Bob Arum declared after learning that not everyone understood he was joshing when he mentioned the possibility of a Manny Pacquiao v Gennady Golovkin scrap.

In the past, Arum has said he didn’t think Floyd Mayweather Jr.’s  frame is suitable to meet a middleweight.

Same goes, he made clear, for Senator Pacquiao.

Not unlike most members of the boxing media, Michael Woods can also handle abuse and trauma. Tell me you can’t come back stronger once you spill coffee on your laptop! TELL ME!