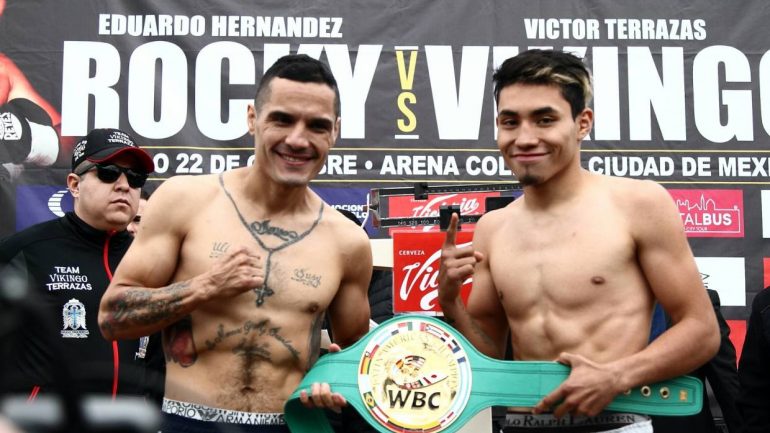 Undefeated junior lightweight prospect Eduardo Hernandez may only be 18 years old but he fights like a seasoned veteran, one who could be fighting for a world title if he continues to win impressively.

Hernandez made short work of former world titlist Victor Terrazas on Saturday night, stopping him at the end of the second round at the Arena Coliseo in Mexico City.

While Terrazas is 15 years his senior, Hernandez was undaunted from the experience. Hernandez has been fighting as a pro since March of 2012, when he was 14 years old.

From the opening bell, Hernandez stood in the pocket with the shorter Terraza, sitting down on his punches and consistently landing with right hands to the head.

Near the end of the second round, a right uppercut to the head hurt Terrazas. Hernandez followed up with a barrage of punches, dropping Terrazas to his knees, where he remained while referee Christian Curiel counted him out at 2:59.

Hernandez was emotional while a regional title belt was placed around his waist.

“I’m crying because of the emotion,” said Hernandez, who resides in Mexico City. “I promised this belt to my father. We spent a lot of hours in the gym. I’ve worked very hard and look at the results. I’m going to continue working very hard in the gym.”

In the co-feature bout of the Promociones Del Pueblo card, flyweight Esmeralda Moreno won a one-sided 10 round decision over Melissa McMorrow.

Both fighters suffered cuts above their left eyes in the second round. Moreno’s cut was from an accidental headbutt, while it was ruled that a punch opened McMorrow’s cut.

Referee Christian Curiel deducted a point from McMorrow near the end of round eight, likely from leading with her head, which opened another cut above Moreno’s left eye.

Both fights aired on Televisa throughout Mexico.