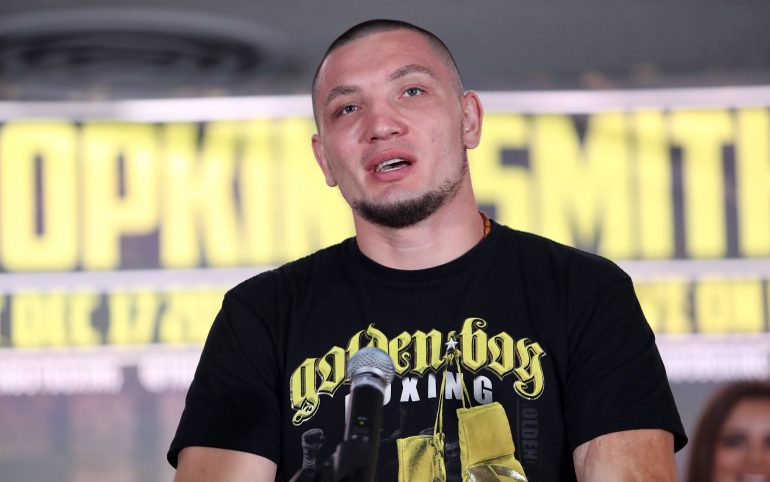 INGLEWOOD, California – On the eve of Bernard Hopkins’ farewell fight on HBO, another card featuring two light heavyweights in their prime was officially introduced during a press conference held at The Forum Monday afternoon.

“The main event of the HBO Latino card is a fight that we strongly feel could possibly have ‘Fight of the Year’ candidate written all over it,” stated Oscar De La Hoya at the podium during the presser. Oscar went on to say a few words about the Golden Boy Promotions fighter he calls “El Chingonsky” just before introducing him to the podium.

“Ever since we saw this fighter – I witnessed something special. Not because of the power he possesses, but the fact that he’s willing to continue learning and growing.”

Shabranskyy (17-0, 14 knockouts), a 29-year old import from Ukraine, was short with his time at the mic.: “I’m so excited about this fight. It will be a good opportunity for me, a good fight for fans and myself. I will be ready.”

After the proceedings, Shabranskyy spoke with RingTV.com about his upcoming fight.

“He’s a good challenge,” said Shabranskyy in his broken English. “This is a good opportunity. I know Sullivan Barrera is a fighter, and I would love a fight with him – it will be a great fight.”

Last December, Shabranskyy fought and beat Yuniesky Gonzalez on HBO Latino in what was his biggest test to date. Two knockout wins, and almost a year to the day later, he takes on another Cuban in what will be a good measuring stick to see where he is as a full-fledged contender in the 175-pound class.

“It’s boxing – you never know how it goes, but I believe it will be a good fight – like a war,” said Shabranskyy on what he expects in this match-up. He continued, “I don’t like talking shit before fight, so we will see. I will be ready 100-percent. What will happen – only God knows.”

Barrera (17-1, 12 KOs), who is promoted by Main Events, is coming off a unanimous decision loss to Andre Ward this past March, and while he admitted to closely watching the fight, Shabranskyy eluded to not taking much from it by stating, “My tactic and Andre Ward is different – so it will be a different fight.”

Training camp has already begun for Shabranskyy, and it will be a total of two months for him and trainer Manny Robles to prepare for Barrera. “I will be ready,” concluded Slava, and when finally asked if he can knockout Barrera, Shabranskyy responded, “My goal is to be ready and in 100-percent good condition to add to my power. We will see who can take my power.” 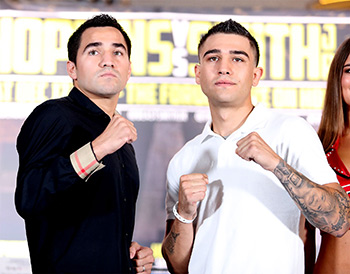 “It is a great pleasure to open up the card for the best network,” said Rios on the dais.  “I never overlook any opponent or underestimate any opponent, so Roy, let’s give the fans a great show.”

“December 16th is gonna be a great night,” said Tapia on the podium soon after. “I’ve been pro for five years already, I’ve worked my entire career really hard, and it’s been anything but a smooth path to get to this point. December 16th, you’re gonna see who I am, and what I can do.”