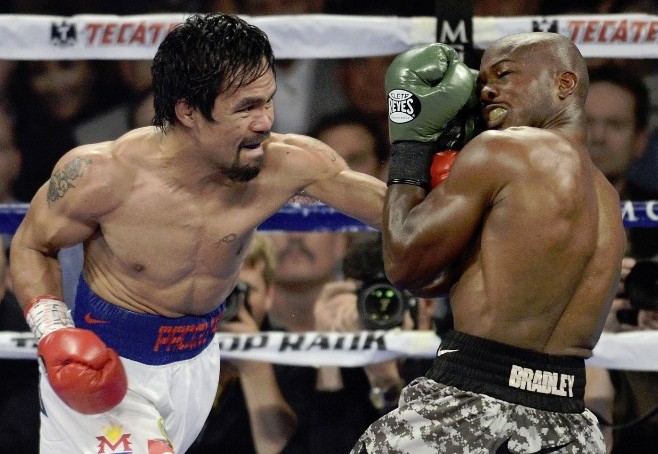 Bob Arum is already cooking up a possible match-up between Terence Crawford and Manny Pacquiao in 2017 if Pacquiao prevails on Nov. 5 against Jessie Vargas and Crawford wins  his Dec. 10 planned match, the veteran promoter told RingTV.com on Friday.

“If Manny wins the fight and funny enough with Crawford going again in December, it’s possible to do an April fight if Manny and Crawford are successful,” Arum said in a phone interview. “Crawford against Manny — that’s a possibility. That would be a great match.”

Aum is currently in talks to put Crawford on HBO on Dec. 10 after Gennady Golovkin moved off the date to continue negotiations with Danny Jacobs. Arum has tried to give Crawford a shot at Pacquiao before. However, Pacquiao’s side chose to face Vargas instead on Nov. 5, leaving Crawford without a dance partner.

Now, Arum is trying to resurrect the idea again. Yet the Vegas-based promoter isn’t limiting himself to just fighters he promotes as potential Pacquiao opponents. He also spoke optimistically on Friday of working with Al Haymon’s stable and a little cryptically of not having to deal with HBO again on future pay-per-view cards.  Arum seemed emboldened to usher Haymon into his fold and co-promote with Haymon with his company, Top Rank distributing Pacquiao-Vargas on PPV next month instead of HBO. Arum and Haymon had preliminary discussions about matching Adrien Broner with Pacquiao for November before Broner priced himself out.

“I talked to Haymon before I made the Vargas fight about Adrien Broner, who he couldn’t control,” Arum said. “But he has some other welterweights — (Danny) Garcia could be a good opponent. (Keith) Thurman could be a good opponent. I mean, there’s no more boundaries now for Showtime fighters and HBO fighters. As far as I’m concerned, we’re having a great experience doing our own pay-per-view and there’s no real reason for premium networks to get involved in pay-per-view.”