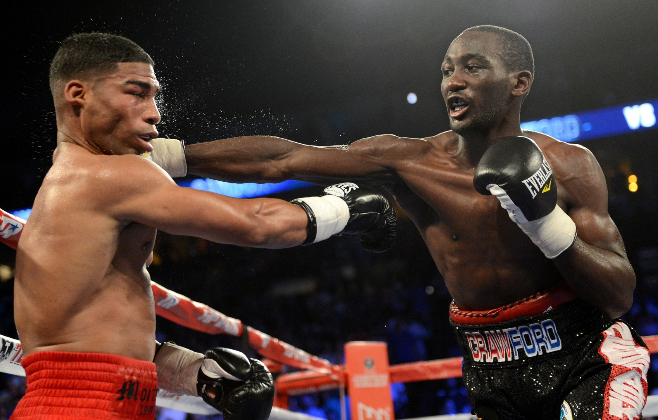 Bob Arum hopes to put together an HBO package of fights on Dec. 10 featuring Terence Crawford against an undecided opponent and the tape-delayed broadcast of Andy Ruiz and Joseph Parker vying for the WBO heavyweight crown in New Zealand, he told RingTV.com on Friday morning.

A source close to the situation told RING that HBO plans to stage a double-header on the evening of Dec. 10 and could even do a tape-delayed broadcast of a bout at 5 p.m. earlier in the day, opening the door for a possible fight involving Wladimir Klitschko to also appear on the date.

So it’s conceivable that HBO could air three fights on Dec. 10, the source said.  “HBO could buy delays on some of them and show them in conjunction with the Crawford fight,” Arum told RING. “That would be fun.”

HBO was holding Dec. 10 for Gennady Golovkin’s possible middleweight championship with Danny Jacobs. However, the elaborate talks have pushed the fight into 2017, creating a vacuum in HBO’s fight schedule for December. Arum is now trying to book Crawford, the unified 140-pound champion who is adamant about fighting three times a year, in the date.

Since the bout between Ruiz and Parker was finalized earlier this week for Dec. 10, it would also make sense to bundle it with the Crawford fight, Arum said. Then, there’s the possibility of Klitschko also fighting Dec. 10, either against IBF titleholder Anthony Joshua or another opponent. Arum hopes to engage the network in talks about broadcasting Ruiz-Parker as part of a twin bill with Crawford.

“I haven’t talked to them,” he said, stressing it’s just an idea that makes sense and that he plans to pursue. “There’s plenty of time. First of all, we have to see if we can deliver the Crawford fight. Then we have to see if there’s a Klitschko fight.”

Arum said he was able to convince Creighton University to move a scheduled basketball game elsewhere to accommodate Crawford fighting in his hometown of Omaha, Nebraska on Dec. 10.  (He did the same at UNLV for Manny Pacquiao’s bout with Jessie Vargas Nov. 5.) Two opponents who have come up for Crawford are titleholder Eduard Troyanovsky (25-0, 22 KOs) and Antonio Orozco (25-0, 16 KOs), though Arum declined to discuss the candidates who may be under consideration.

“He says he’s ready to go on Dec. 10,” Arum said of Crawford. “The question now is getting the building and we’ve talked to the University of Creighton and they’re going to move their basketball game and we have to get an opponent. So yeah, we don’t know for sure but we’re moving in that direction. I’m optimistic.”

The WBO ruled on Thursday that Ruiz and Parker can vie for the WBO crown vacated by Tyson Fury last week. “I’m looking forward to it,” Arum said of the trip to Auckland, New Zealand. “Of all the places I’ve promoted, including Australia, which I’ve done a number of fights there — I’ve never been to New Zealand. Everybody says it’s a great country.”