A few days after 51-year-old Bernard Hopkins announced plans for the final fight of his career, a 42-year-old promoter and boxing novice will embark on the start of his own professional journey.

Montreal’s Alexandre Choko, a chatty, youthful-looking entrepreneur who promoted boxing and once worked on Mike Tyson’s one-man play, wants to join the private club of those who have fought professionally.

The southpaw Choko, who has framed his act as a way to promote clean sport free of drugs, is set to face 22-year-old Valentin Bokros (5-6, 2 knockouts) on Thursday at the Montreal Casino in Montreal, Quebec in a scheduled four-round junior middleweight bout in his pro debut. Choko’s goal isn’t to become a world champion. No, in typical flair, Choko wants to have five professional bouts — on five different continents. The card on Thursday is headlined by the Canadian Olympian Custio Clayton (9-0-0, 7 KOs) against Ramses Agaton (17-4-3, 9 KOs). 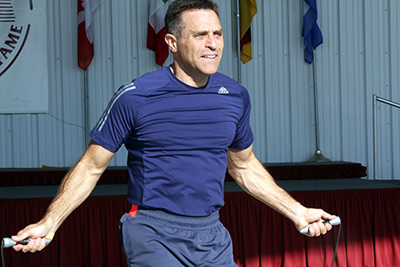 Viewed through the prism of Hopkins, what Choko is doing isn’t so far-fetched. But with his lack of a boxing background, along with the frightening reality he sustained eight concussions in kick-boxing, sparring and playing rugby through the years, Choko’s bucket-list endeavor is unusual — and risky. (He hasn’t suffered any head injuries in preparing for Thursday’s bout, he says.)

“I always dreamed of fighting professionally,” he said in a phone interview. “And because of my past, it was never a consideration until recently. This is a dream come true. I’m 42 years of age. To hop into the ring after all the wealth of experience, I think I will be in another zone that night. I’m scared. I’m nervous. But I really believe that so many spirits will be with me for that fight.”

He also wants to promote the idea that “doping has no place in boxing nor in any other sport” and that a 42-year-old can get in fantastic shape without the use of performance enhancing drugs. “I want to show what hard work can do,” he said. “I want to be an example for clean sport and just doing your best to achieve a goal.”

Quebec law stipulates, he said, that for someone to receive a pro boxing license, they must have at least 30 amateur fights with half of them victories. Choko has never fought as an amateur boxer. But he said he trained eight months in Montreal and went through a tryout with the local commission — evaluators watched him spar and work out and ultimately granted a license.

Choko has a background in amateur kick-boxing but had never boxed. He suffered a head concussion after a kick-boxing match when he was 21 and promised his father that he would never compete again. Choke kept that promise, staying in combat sports but as a promoter, doing some 60 shows, 12 pro boxing cards, including an ESPN event in 2014. He’s also authored a book, “The Future of boxing,” in which he interviewed 55 boxing legends, including Muhammad Ali, Tyson and Roberto Duran.

Choko offered up a prediction for his debut on Thursday. “I will win,” he said. “The way I’ve been sparring I’m pretty confident I can stop this guy. I’m pretty sure if I catch him properly with the body and then finish at the head, I will win by knockout or TKO.”

While Choko admits he was plagued with doubts about turning pro at his age, a number of remarkable experiences encouraged him to keep the dream alive. While promoting Mike Tyson’s one-man show “Undisputed Truth” in Canada and Monte Carlo, Choko happened to be working out in a Toronto gym with Tyson and former champion “Sugar” Shane Mosley in September of 2014, he said.

As Choko tells it, Choko unleashed a vicious combination on the mitts, causing Mosley and Tyson to react with amazement. They asked if he had ever fought before. He hadn’t. That, he says, was a galvanizing moment and got him thinking about turning professional.

Choko also wants to honor his grandfather Arthur, who would often say to friends, “Be careful, Alex is in boxing, he’s a professional.” Choko felt a little awkward since he had never actually fought professionally. “I felt like an imposter,” he said. The Sunday after his fight, Choko plans to travel to visit his 93-year-old grandfather. “I’m going to show him a tape of a fight,” he said. Hopefully for the Choko clan, it will end with his arm raised in victory.