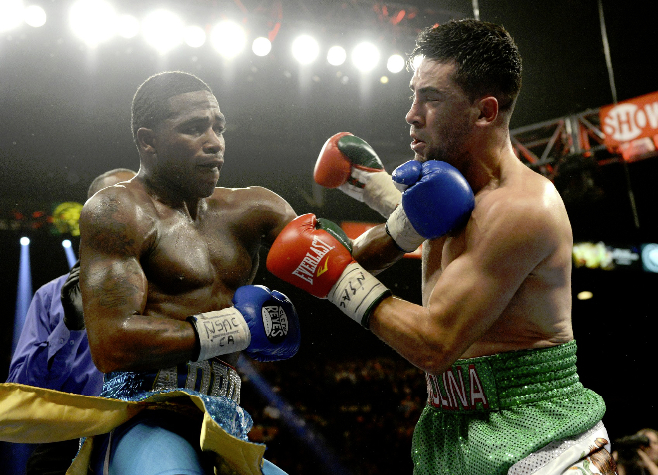 Robert Easter Jr. and Adrien Broner could share the same card in respective bouts on December 17.

Easter Jr., who won the vacant IBF lightweight title in a difficult fight against Richard Commey on Sept. 9, is eyeing a return to the ring in December, Robert Easter Sr. told RingTV.com on Friday. Broner, who is something of a mentor to Easter, is targeting a comeback on December 17, and it’s possible the two Ohio residents could share the same card, according to Michael Stafford, who trains Broner and helps out Easter Sr. with his son. Broner (32-2, 24 knockouts) and Easter (18-0, 14 KOs) fought on the same Spike show on April 1.

“That’s a possibility,” Stafford told RingTV.com of a double-bill with Broner and Easter. “Adrien would like that. That would be a real treat (for the fans) to have them fighting together. We may even throw in (bantamweight titleholder) Rau’shee Warren in there too on the card.”

The venue is still up in the air as opponents are vetted, said Stafford, who described Broner’s fight in December as a “tune-up” before a possible title challenge in 2017 with junior welterweight belt-holder Ricky Burns of Scotland. Stafford said Broner was fine and in good spirits after he posted a number of disturbing messages on social media on Wednesday that suggested he was thinking of committing suicide.

“He was just going through stuff with his girlfriend,” Stafford said. “He came to the gym the same day. I think they worked it out. Now he’s going to take a little trip to Vegas to see a few friends. He’ll come back and then it’s back to business.” Broner has been spotted in Vegas palling around with frenemy Floyd Mayweather Jr.

As for Easter’s fight in December, it likely won’t come against Jose Pedraza, the IBF junior lightweight champion, who has publicly called out Easter Jr. as someone he’d like to face. “We’ll get the name out shortly,” Easter Sr. told RingTV.com. “We have a couple people in mind but the name is not going to get out there yet.”

Pedraza isn’t on that shortlist of opponents but perhaps it’s a fight that can be made in 2017, Easter said. “That’s a possibility,” he said. “If he wants to be that big of a fool to do that. We’ll have a name shortly. Whoever has belts, we can come and get them.”