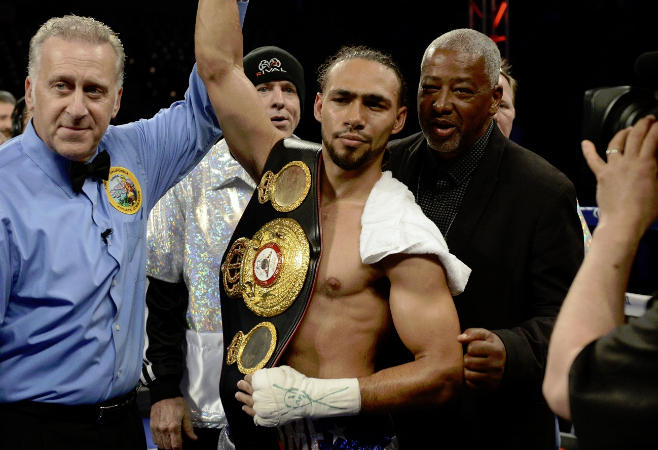 It’s not just fans on social media who are turning on Danny Garcia and trashing his choice of opponent for Nov. 12.

No, Garcia’s selection of unheralded Samuel Vargas for a 10-round non-title fight has also drawn the scorn of a number of notable fighters, such as Keith Thurman, Errol Spence Jr., and Terence Crawford.

“I wanna be like you one day,” Crawford tweeted at Garcia on Thursday. “You got it made,” an apparent reference to the perception that Vargas is a soft touch.

Now, all those boldface names could potentially face Garcia, who holds a welterweight title, at some point with Thurman vs. Garcia targeted for March, so the carping had the scent of good-natured trash talk to build up a future fight. But it was a little surreal to see Garcia’s peers jab the level of opponent, a habit that’s usually reserved for jaded fans who have lashed out at Garcia for facing shopworn former titleholders such as Robert Guerrero in January and Paulie Malignaggi in August of last year.

And of course, who can forget the immortal Rod Salka, who was blasted out in two rounds in 2014 and is Exhibit A in some fans’ view that Garcia, one of the more talented fighters in the sport, has been too cautious of late in who he faces.

Garcia (32-0, 18 knockouts) is viewed as someone who carefully selects his opponents — a “cherry-picker” as it’s commonly referred. Thurman expanded that perception, tweeting a picture of a pint of Ben & Jerry’s Cherry Garcia ice cream with a picture of Garcia sticking out his tongue in the middle of the carton. “Enjoy your last cherry of the year,” Thurman wrote above the photo on Twitter. “I’ll be waiting to take that green belt in 2017!”

Similarly, Spence, who blew out Vargas (25-2-1, 13 KOs) in four rounds in 2015, was not impressed with the choice of opponent. “Danny say I have to pay my dues but he fighting somebody I knocked out already,” Spence wrote on Twitter on Wednesday after the fight was announced at Temple University’s Liacouras Center in Garcia’s hometown of Philly in a PBC on Spike broadcast triple-header.

Garcia, if he was aware of the ridicule, didn’t let it ruin his kick-off press conference on Thursday. Garcia was in good spirits and deflected the criticism for his facing Vargas. PBC spokesman Tim Smith later told RingTV.com of the lashing out by Garcia’s rivals:“It’s a free country and if things work out like they should — they’ll all see each other in the ring. They’ll settle their differences like men.”