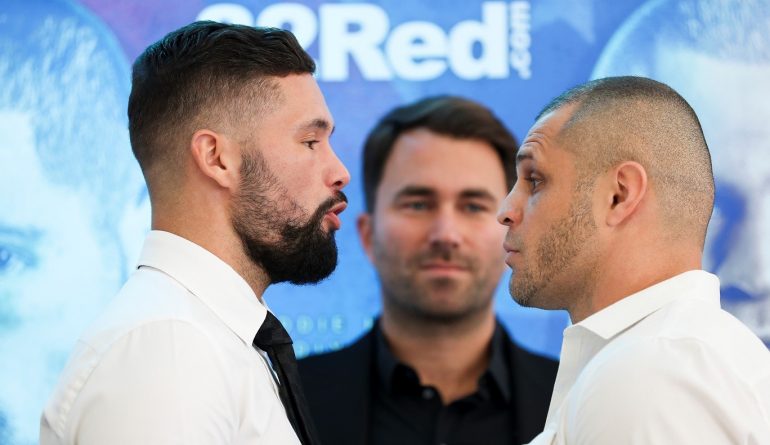 The legendary light heavyweight champion Archie Moore once said of a young Cassius Clay, “The empty wagon makes the most noise,” suggesting that the brash 20-year-old was all mouth and no substance, ahead of their November 1962 heavyweight bout in Los Angeles.

“The Ole Mongoose,” seriously old by that point, was swatted aside effortlessly by a sparkling and super-skilled Clay inside four rounds and Moore was convinced, ahead of time, that the fighter who would become known as Muhammad Ali could back up his boasts.

What would an old school fighter such as Moore have made of a modern-day warrior like the vociferous Tony Bellew? The Liverpool, England, native experienced heartbreaking setbacks at 175 pounds but moved north to capture the vacant WBC cruiserweight title with a sensational third-round knockout of fight favorite Ilunga Makabu in May.

While Bellew is no Muhammad Ali, he backed up his mouth and kicked sand in the faces of all those who gave up on him as a potential world champion. Now, “The Bomber,” still not short of a soundbite or two, returns to action this Saturday in a title defense against American veteran BJ Flores at the Echo Arena in Liverpool.

“I’m going to show BJ Flores what time it is and I’m going to show him that he’s been talking s—,” barked Bellew, who is rated No. 4 by THE RING at 200 pounds. “He’s been at it for a couple of years now and he’s annoyed me beyond belief.

There is perhaps a hint of unfairness regarding Flores (32-2-1, 20 KOs) being outspoken. Bellew fell short in championship contests against Nathan Cleverly and Adonis Stevenson, for WBO and WBC light heavyweight titles respectively, but he was unquestionably the A-side when it came to the pre-fight antagonism.

The charismatic Englishman has actually sold plenty of events with the gift-of-gab but steadfastly maintains that he earned his opportunities, as well as his subsequent world title success, whereas Flores is both a detractor and a fraud.

“He has never given me credit since I moved to cruiserweight, although he lost five grand when he bet on Makabu to knock me out,” said the 33-year-old boxer-puncher. “He’s a tit and I’m going to enjoy shutting him up. There won’t be any embracing afterwards. I’m going to punch Flores from pillar to post and I’m going to mean every punch that I land on him.

“I’m usually a sportsman but I don’t need to be with this arsehole. He’s a mouthpiece and he’s barked up the wrong tree. This guy is the worst type of boxer that you can imagine. He’s a celebrity boxer, who enjoys the lifestyle and the nightclubs. He doesn’t want to put in the hard graft that true professional fighters do.

The general betting odds see Flores as a 7-1 or 8-1 underdog and it was therefore impossible not to speak to Bellew about the future. He is in a talent-laden division, undoubtedly one of the toughest in the sport, but his ambitions actually go beyond the shark-infested waters at 200 pounds.

“I want to unify the cruiserweight division and I want megafights,” said Bellew (27-2-1, 17 KOs). “Unification fights are huge, no matter what division you’re competing in.

“But people also like big domestic scraps or David vs. Goliath-type fights. Recently, we’ve had Canelo-Khan, Golovkin-Brook and I think me and David Haye fit into that kind of scenario because David is a full-blown heavyweight. Actually, I don’t personally believe he is but the media has painted him out that way and he is a former (WBA) heavyweight champion.”

Haye is due back out on Dec. 10 and may or may not appear in Bellew’s future. A lot is sure to depend on what opportunities turn up for both men.

One man who Bellew always told this reporter to look out  was Oleksandr Usyk, who ripped the WBO cruiserweight title from Krysztof Glowacki by 12-round unanimous decision last month. Bellew has known of the Ukrainian danger man for several years and the pair actually sparred together when Usyk was an amateur.

“He won a world title and I can’t blame people for putting him ahead of me because he is that good,” said Bellew with respect. “I knew that Usyk could outbox Glowacki but I’m a bit disappointed that he didn’t show more power and killer instinct. I think he felt that he could take Glowacki out of there but went into cruise-control and made it easy on himself.

“You can be made to pay for that against a puncher like myself because I can end a fight with one shot. Usyk could be way ahead on points against me and then wake up to discover the fight is over. If I hit you flush with the left hook or the right hand, chances are that you’ll be on the deck. I’m probably the best finisher in the cruiserweight division right now.”

No matter who he’s fighting, “The Bomber” almost always provides fireworks outside the ring. And this is no empty wagon — that has been proven.

Tickets are on sale now via www.echoarena.com or by calling 0844 8000 400 priced at £40, £60, £80, £100 and £150. VIP tickets will be available exclusively from www.matchroomboxing.com Face value tickets for Bellew vs. Flores are also be available from http://www.stubhub.co.uk/matchroom-boxing-tickets/ .