Broner may fight in Dec. before faces Burns in Vegas 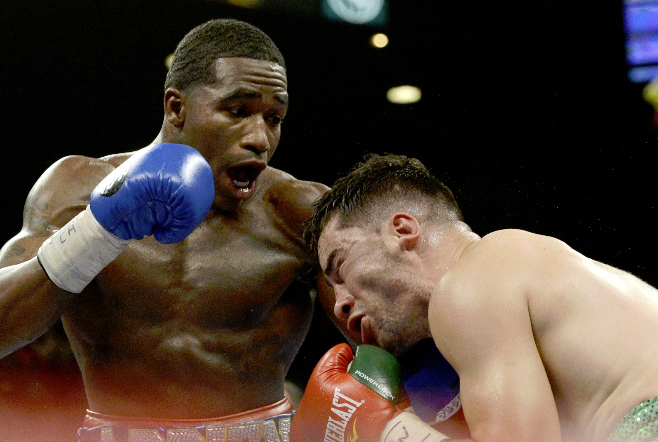 Adrien Broner’s quest to regain his WBA junior welterweight belt from Ricky Burns will likely take him to a venue in Las Vegas in February. However, Broner’s trainer, Michael Stafford, told RingTV.com he envisions Broner fighting in December, possibly at Barclays Center in Brooklyn before the bout with Burns.

“We’ll hopefully be fighting before we face Burns,” Stafford said in a phone interview on Tuesday. “It’s been awhile since Adrien fought. He wants to get back into the ring as soon as possible. With the fight with Burns happening in February, we’d like to fight before that.”

Burns manager told the Scottish channel, STV, the negotiations between Broner and Burns are nearly complete. “I’d say it’s 99 percent certain the fight against Broner in Las Vegas will go ahead,” Alex Morrison said. “We are in ongoing negotiations with Broner’s camp. It’s likely to take place in February, as yet a venue to be identified.”

Scotland’s Burns (41-5-1, 14 knockouts) won a hard-fought 12-round decision against mandatory challenger Keryl Relikh last Friday in Glasgow to keep his WBA title. Broner, a former four-division champion who was in attendance for the fight, vacated the same title when he failed to make weight for his match with Ashley Theophane in April.

Since that fight, Broner (32-2, 24 KOs) has been more preoccupied with the legal process than with boxing. He was charged with felony assault and aggravated robbery stemming from an incident at a bowling alley in January, but those charges were dropped last month when the special prosecutor’s star witness failed to show up for the first day of trial. It’s a credit to Broner’s talent and star power that his first fight since the stoppage of Theophane will be for a title against Burns.

Stafford said Broner sparred 12 rounds yesterday and he’s itching to go. “You know Adrien, when he fights he can’t wait to get back into the ring again,” the trainer said. “He hasn’t fought in a while, so he wants to get something going.”

Morrison isn’t looking at a fight with Broner as just an excuse to get a rich payday. “Ricky could receive a life-changing amount of money with his fight and I’m confident he’ll retain his title,” Morrison said. “He’s not going there to sell his title. He’ll be going there to retain it. I think he showed on Friday’s he’s capable of beating anyone.”