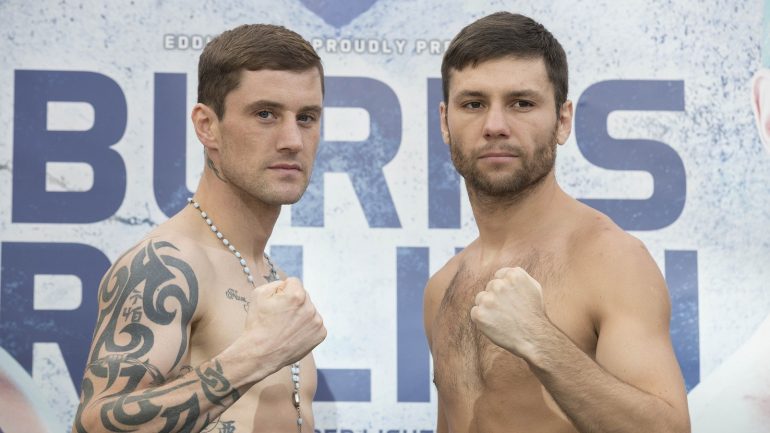 GLASGOW, Scotland — As expected, Ricky Burns retained his WBA junior welterweight title but he had to go through hell to do it Friday at The SSE Hydro. Unbeaten challenger Kiryl Relikh made sure of that.

Burns, who is rated No. 8 by THE RING at 140 pounds, used his championship guile and experience to prevail but the challenger’s stock has soared following a game effort from which he will undoubtedly learn. Burns was just a bit too seasoned and is a master at pacing 12-round fights.

Relikh was deprived of the credit he deserved by some cruel numbers: The official scores were 116-112 twice and an insane 118-110 in favor of the home fighter.

“That boy could bang,” Burns (41-5-1, 14 knockouts) said at the post-fight press conference. “I had to grit my teeth and he hurt me more than once. I stuck to the plan that (trainer) Tony (Sims) and I came up with, though, and (Relikh) was flat-footed at times.

“His power was the main thing that bothered me. We thought he was fading in the middle rounds but he came back strongly. He would have a round off, get his energy back and then come on again.”

Relikh (21-1, 19 KOs) started confidently and landed nice power shots in the opening session while occupying center ring. Burns needed good lateral movement as his opponent switched to and from the southpaw stance and cut the distance effectively.

Burns found his stride in the third and did a good job of keeping Relikh off balance but the Belarus fighter looked dangerous and continued to thread home power shots. The visitor found the Scotsman with a solid left hand in the fourth, which motivated Burns to battle back strongly with the right.

As the bout progressed past the midway point, Relikh looked like the stronger man as he walked Burns down with confidence. He was caught, didn’t seem to mind, and landed intermittently. Burns scored with a sparkling burst in the seventh, however, and was piling up points.

Burns brought out the championship artillery in the eighth, purposefully testing the engine of his opponent, who hadn’t gone past that round in his entire career. The defending titleholder’s punches landed crisply and effective combinations found the head of Relikh, who struggled to respond.

The fight appeared to have turned and Burns’ vast experience was the decisive factor. He had absorbed everything that the challenger brought to the table and was displaying grit and heart, the likes of which Relikh had never seen before. Just when Burns seemed to have things in control, however, a monster left hook exploded off his head. He did well to stay on his feet and fought back with fury but Relikh closed the 10th in command.

And so began a serious second wind from the man most at press row believed to be exhausted. Relikh had a huge 11th, pressuring Burns for almost the entire session and belaboring his man to head and body. The Scotsman has never been stopped and his durability in the face of a serious 140-pound puncher was astonishing at times.

In the 12th both men had their moments, although Burns’ work appeared sharper and more accurate. Relikh, who was implored by his trainer, former two-weight world champion Ricky Hatton, to go for the knockout before the session began, swung from his heels and left no doubt about his ability to do 12 hard rounds.

This reporter had Burns retaining his title by the slimmest of margins.

It has been a remarkable career for Burns thus far. The 33-year-old veteran made Scottish boxing history in May, when he stopped Michele Di Rocco in eight rounds to become his country’s first ever three-weight world titleholder but next up could be an intriguing clash with an opponent who has gone one better.

Adrien Broner, a four-weight world titleholder, previously held the WBA belt that Burns now has in his possession. The brash American lost that strap on the scales when he came in overweight for a title defense against Ashley Theophane in April, and Burns was in the right place at the right time to collect the hardware.

“I would like a Vegas trip,” said Matchroom boss Eddie Hearn. “Adrien Broner is almost there but there are one or two things that need to be sorted out first – mainly money.”

There was talk that Burns had sustained a damaged ear drum, which could force the Broner clash back to early 2017. The Scotsman also mention the RING 140-pound champion, Terence Crawford, who outpointed him in March 2014.

Burns weighed in officially at 139.2 pounds, whereas Relikh required three trips to the scales before coming in at exactly 140.