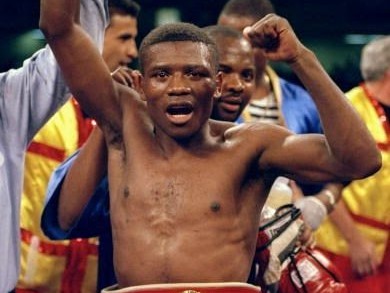 Vuyani Bungu came from nowhere to stun Kennedy McKinney to capture the IBF junior featherweight crown in 1994. He would hold the title for much of the rest of the decade, making 13 successful title defenses – a South African record.

Like many of his countrymen, Bungu came from an inauspicious beginning; he first became interested in boxing in 1978, initially training in a room at school with limited equipment.

He would go barefoot to school but this was commonplace as very few people had money for shoes. Bungu would take a paper bag with his “school lunch” in it but, at break time, he would sit apart from the other pupils with his back toward them, open his lunch bag and chew. Except, inside his lunch bag were stones and he was too embarrassed to let anyone else know his family could not afford to give him lunch to take to school.

“Boxing was a way of escaping poverty,” Bungu explained to RingTV.com. “I didn’t have the role model then but, when I went to the gym, I saw, as a professional, you can make money, then I saw it as a was a way of getting away from poverty. I come from humble beginnings and boxing was my way out.

“It was not easy; it was tough but because of boxing, I have managed to pull myself from all the tough decisions I was facing. I concentrated on my boxing training.”

Bungu turned professional in the spring of 1987, reeling off 13 wins before being turned back by the more experienced Fransie Badenhorst in a national title fight in 1989. The loss was avenged nine months later.

He stayed active, retaining his national title on three occasions before traveling to Italy, where he met future featherweight titlist Freddie Norwood on the undercard of Welcome Ncita-Jesus Salud, dropping an eight-round decision.

Over the next two years, Bungu rebuilt and got back into the title picture. He made his American debut fighting in Northern California on the undercard of Kennedy McKinney-Richard Duran and then in Texas, in support of the McKinney-Ncita rematch.

Finally, in the summer of 1994, he got his chance to fight for the title against McKinney. Bungu made the most of his opportunity, scoring an impressive unanimous decision over the previously unbeaten 1988 Olympic gold medalist. That fight was voted THE RING magazine’s “Upset of the Year.”

“I became world champion on August 20 (1994); from then, no one was in my way,” he said. “That’s why I managed to become the most successful South African boxer.”

In a similar feature, McKinney picked Bungu as having the best defense and also the smartest fighter he fought.

Unsurprisingly, Bungu says his best win was when he won the title against McKinney: “That was my biggest breakthrough because it was my first attempt at the world title and the way I was training and the way I was getting motivated in training because Welcome was my stablemate when he got beaten by Kennedy. (McKinney) was the IBF champion. It’s when I said to myself, ‘One day, if I get the opportunity to fight (McKinney), that I will avenge my countryman.”

After surpassing Brian Mitchell’s South African record of 12 world title defenses, Bungu vacated his throne. He met Naseem Hamed in early 2000 and was stopped in four one-sided rounds by the self-styled “Prince.”

“That opportunity to fight Naseem Hamed was my biggest opportunity in the world. So many things went wrong in the preparations. It was unfortunate,” he explained. “He caught me with a good right and it was my first time ever to be knocked out in the ring. I was so disappointed. It was the fight of my life. I wanted to win desperately.”

His former promoter Golden Gloves Promotions CEO Rodney Berman feels his fighter would have had to have boxed the perfect fight to win but nonetheless wanted to give Bungu the opportunity to once again cause a surprise. 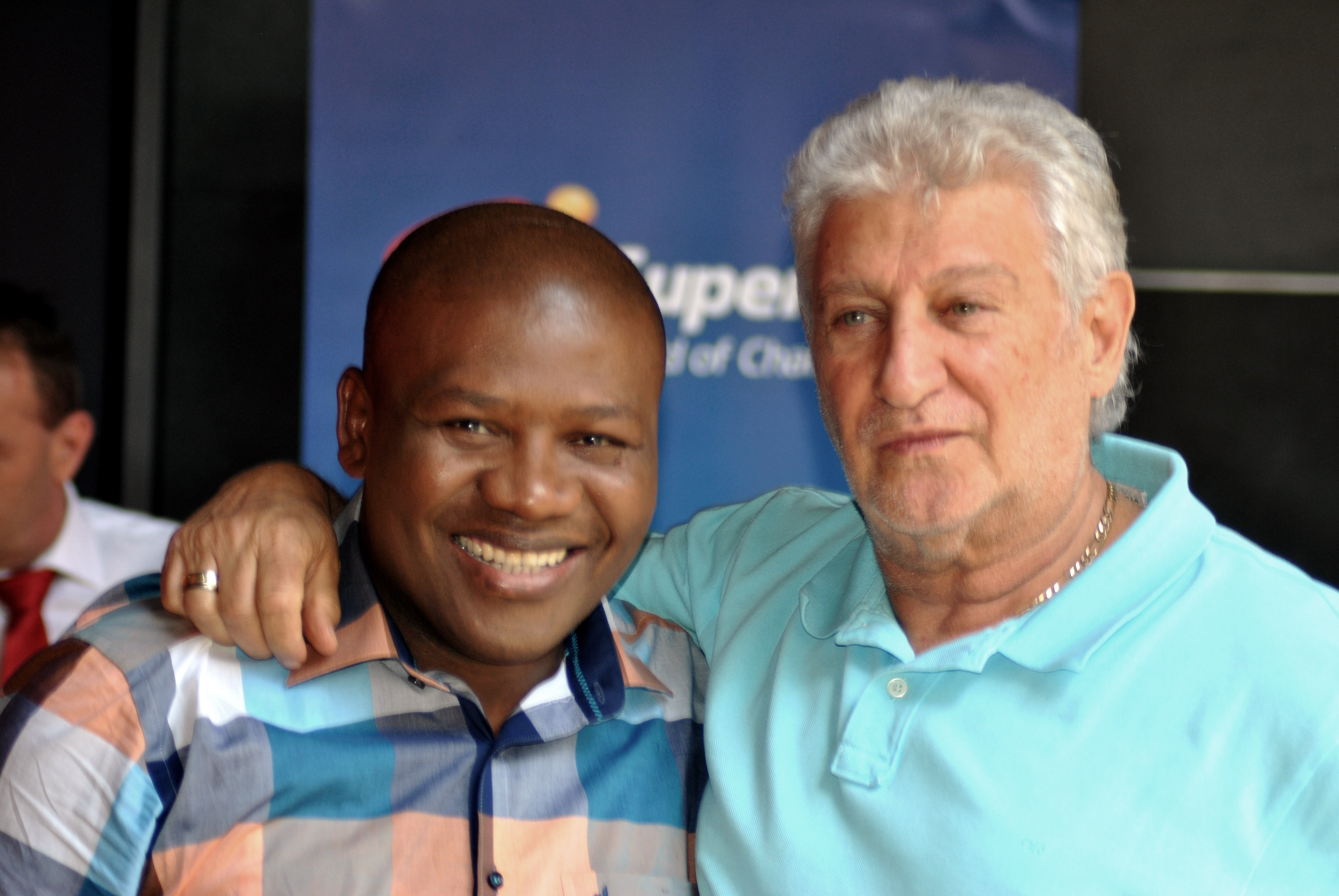 “When he fought Hamed, he had been inactive for (over) a year and stepped up a division,” Berman said. “I am not detracting from Hamed’s ability, as he was an incredible draw card, marketed himself brilliantly, was incredibly exciting and had great ability. However, I saw flaws in his makeup and thought that Vuyani Bungu could exploit this.

“Unfortunately, inactivity, the enormity of the occasion and Hamed’s incredible entry into the ring, all played a part in totally demoralizing Bungu and, in reality, he was a beaten fighter before the first punch was thrown.

“He nevertheless left an incredible legacy for South African boxing and in the junior featherweight division particularly.”

After losing to Hamed, Bungu fought four more times, going 2-2 before bringing down the curtain on his career in 2005, following a loss to countryman Thomas Mashaba. He retired with a highly respectable mark of 39-5 (19 knockouts).

Such was his status in South Africa that he was featured on a stamp in 2001 in the “Famous Athlete Series”: Bungu looks back on his career with fond memories. His success helped bring him and his family a better life.

“The Beast” wasn’t particularly special in any one area; however, he was incredibly disciplined and made the most out of what he had, “My strength was training very hard and my jab was my best punch in the ring. I used to train very hard for every fight.”

Berman spoke glowingly of his former charge, “Apart from his achievements, he is, without doubt, the finest gentleman of all the fighters I have ever promoted.”

Bungu, now 49, is married with three daughters, he says he did well financially out of boxing, “Yeah, of course, I’m living a good life, a clean life. I’m happy because of my achievements.”

The Mdantsane-born fighter remains involved in boxing as a trainer.

RingTV.com reached out to Bungu and spoke with him about the best fighters he fought in his career.

BEST JAB
Naseem Hamed: I would say Naseem Hamed because you couldn’t reach him. He was flexible; he was like chewing gum, slick, flexible. He was different from other boxers. He would throw punches from awkward directions.

BEST DEFENSE
Jesus Salud: Jesus Salud was the boxer that was fighting all the champions at junior featherweight, so he had all the experience. That was one of my best defenses. He was tough to hit; he had a good defense.

FASTEST HANDS
Felix Camacho: The young brother of the legend Hector Camacho, that was the quickest, fastest boxer I ever met. He was quicker than Naseem Hamed. He was a southpaw, very slick.

FASTEST FEET
Danny Romero: (Between) Danny Romero and Enrique Jupiter. I would pick Romero. He moved very quick. He had all that experience because he was a former IBF flyweight champion.

BEST CHIN
Mohammad Nurhuda: I was beating him with all my punches but he would take them all and come back. He was tough. Although I was punishing him, he would keep coming back.

SMARTEST
Kennedy McKinney: Because Kennedy doesn’t throw the right hand until he saw the opening, he was very smart. You cannot switch off; you have to be concentrating all the time.

STRONGEST
Nurhuda: Plenty of them but I would say Nurhuda because, every time I threw punches, he comes back throwing punches.

BEST PUNCHER
Hamed: I would say Naseem Hamed. I never been knocked out in the ring. He caught me and I was out.

BEST SKILLS
McKinney: I would say Kennedy McKinney was the best one because he was a slick boxer.

BEST OVERALL
McKinney: Kennedy McKinney was a very dangerous fighter. He doesn’t get hit. I beat him for the IBF title and then made seven title defenses and gave him a chance again.