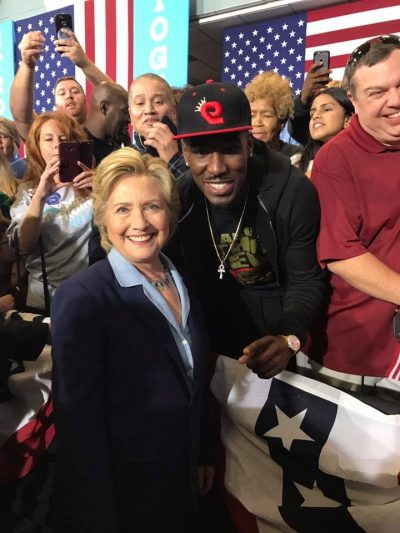 Lightweight titleholder Robert Easter Jr. may have expanded his fan base on Monday when Democratic presidential nominee Hillary Clinton shouted him out during a campaign stop in Northwest Ohio.

“The Mayor told me there is a young man here who just won a boxing championship. Where’s Robert Easter?” Clinton said before he was spotted on stage at Martin Luther King Jr. Plaza in Toledo. “There you are Robert Easter. Congratulations. I know Toledo is proud of you. We all are.”

It was a surreal moment for Easter, who won a vacant IBF lightweight title last month with an entertaining split decision win against Richard Commey. Clinton posed for a picture with Easter before she exited the stage, offering him a few words of encouragement.

“As she walked out, she said, ‘Can I take a picture with the champion?’” Easter told RingTV.com on Tuesday. “She just told me to keep doing a good job and to stay focused.” The encounter was set up by Toledo Mayor, Paula Hicks-Hudson, who presented Easter with the key to the city on Sunday at a rally in his honor to celebrate his title-winning effort.

“(The Mayor) called me down and was like, ‘I have a good opportunity for you,’” Easter said. “’Come down and meet the president. She’s having a rally down here.’ So I came down there and she shouted me out.”

But just because he met Clinton, doesn’t mean it’s a certainty he will vote for her. Easter (18-0, 14 knockouts) has been so consumed with training and resting following his last fight he hasn’t had time to closely watch the election. Now, he intends to do some research into the candidates before he casts his vote in a state that could very well decide the election. “I plan on voting but I have to do more studying to see what both campaigns are bringing to the table,” he said. “I have to do more studying on that.”

The election has been a bruising affair for both Clinton and Republican challenger Donald Trump. While Monday was his introduction into the world of politics, Easter drew some parallels between the campaign and his own punishing sport. “She had to take the stage and really persuade the people why she should be president,” Easter said of Clinton’s speech, which focused on the middle class and the economy. “So she was alone up there, speaking from her heart to persuade these people that she can run the country. I know that had to be tough like being in a fight. She did a really good job.”