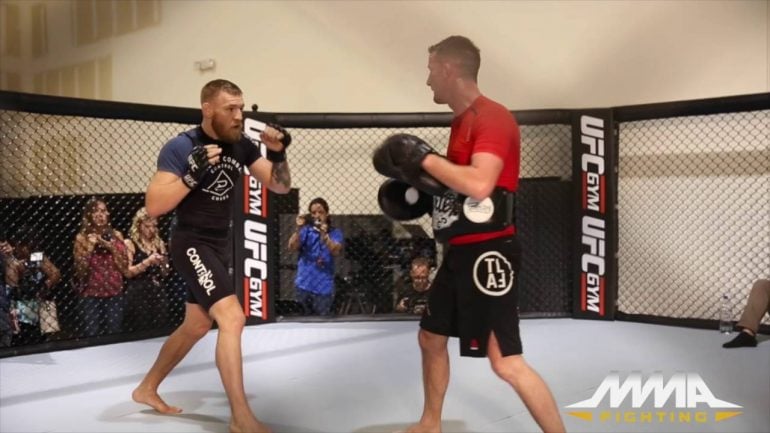 McGregor moving on up in a bid to secure the lightweight title.
29
Sep
by Kendrick E. Johnson

After months of generic promos announcing that UFC is coming to New York for UFC 205, Dana White and company finally let fight fans know what’s in store for them during the UFC’s first trip to the “The World’s Most Famous Arena,” Madison Square Garden.

In a company first, the UFC will have three titles on the line when Eddie Alvarez (28-4), Tyron Woodley (16-3) and Joanna Jędrzejczyk (12-0) defend their lightweight, welterweight and women’s strawweight titles, respectively.

“This is the biggest card we’ve ever done,” UFC President Dana White said at the UFC 205 news conference Tuesday. “This is the best all-around fight card in UFC history.”

Weidman, the former undisputed middleweight champion, was instrumental in the passage of law that legalized MMA, as he made frequent visits to Albany and has been wanting to fight at MSG since he entered the sport.

“This is a dream come true,” he said. “I’ve been envisioning this for so long. I can’t wait to come out and fight in front of you guys.”

White saved his biggest surprise for last, waiting until early Tuesday morning to let the world know that current featherweight champion and UFC cash cow, “The Notorious” Conor McGregor, will be challenging Alvarez for his lightweight title. If McGregor beats Alvarez, he will be only the third man to win titles in multiple weight classes and the first to hold those belts simultaneously.

At the official press conference in New York on Tuesday. McGregor went into “Mystic Mac” mode by predicting a first round knockout over Alvarez.

“I run New York; I run this whole (expletive) town” McGregor said. “And ‘Mystic Mac’ predicts I’m going to KO you inside one round.”

Alvarez, who will be making the first defense of his belt, didn’t back down.

“He quits after eight minutes,” he said, questioning McGregor’s stamina, “and he’s never fought anybody like me in the UFC.”

With McGregor as the face of the card, White and company are guaranteed to have a box office hit and give the UFC 205 card a chance to be the most profitable in UFC history. The last three cards headlined by McGregor have all done over one million pay-per-views buys individually and 4.65 million collectively.