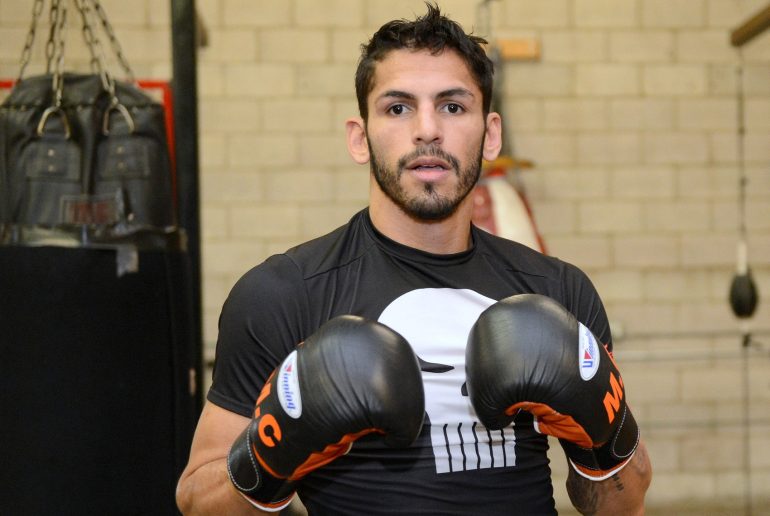 Jorge Linares: The new RING lightweight champion reminded us against Anthony Crolla just how talented he is.

Crolla, a strong, disciplined fighter, stalked Linares from the opening bell and had his moments in an entertaining fight but couldn’t match the Venezuelan’s skills and speed in front of a passionate pro-Crolla crowd Saturday in Manchester, England. Crolla was good, Linares was special.

I was particularly impressed with the fluidity of Linares’ movement combined with his hand speed; he’s beautiful to watch. And he isn’t a pitty-pat puncher; he aims to hurt you, as Crolla found out when a hard right wobbled him in Round 6.

Crolla marched on but simply took more than he gave. I thought two of the judges were a bit too generous to the hometown fighter: Linares won unanimously 115-114, 115-113 and 117-111, meaning the fight very likely would’ve been a split draw had Linares not hurt Crolla in a round he was losing.

But the right man won. I had it 116-112 (eight rounds to four) for Linares, who definitely earned the vacant RING championship and WBA belt.

Now what? A rematch makes a lot of sense. The lightweight division is thin in terms of big-name (read: big-money) fighters. I’m not sure Linares (41-3, 27 knockouts) can make much more against any other 135-pounder than he could in a second fight with Crolla. And there are a number of intriguing possibilities if Linares decides sometime soon to move up to 140 pounds.

His future has never been brighter.

Anthony Crolla: The bad news is that Crolla (31-5-3, 13 KOs) had the chance to take another significant step in his career in front of adoring hometown fans but came up short. He was understandably crushed after the fight. The good news is that it was close enough that he could get another chance.

I’m not sure the result would be different, though.

I appreciate the Anthony Crollas of boxing — tough, blue-collar fighters who train properly, stick to a solid game plan and never give up. That’s what we saw on Saturday, a gritty effort that kept him and the fans in the fight from beginning to end.

The problem is that we also saw Crolla’s limitations. There were too many times in the fight when it seemed Linares was a class above Crolla – faster, more athletic, more powerful, just better. The winner was able to rely on both his natural gifts and determination while the loser was left with mostly the latter.

Again, that’s not to be overly critical of Crolla, who obviously is a fine all-around fighter; he’s just not at Linares’ level.

Of course, he could prove me wrong if a rematch happens. Sometimes determined, resourceful fighters with particularly good trainers – Crolla works with Joe Gallagher – find ways to turn the tables on their rivals and make writers like me eat our words. If any fighter can do that, I suspect it’s Crolla.

WBC lightweight titleholder Dejan Zlaticanin might be left out in the cold for now.

Some background: Linares was declared the WBC’s “champion in recess” when he had to pull out of a mandatory title defense against Zlaticanin this past winter. Zlaticanin then beat Franklin Mamani on June 11 to win the vacant title. And finally, when the Linares-Crolla fight was made, they agreed that the winner would face Zlaticanin next.

I don’t expect that to happen. A Linares-Crolla rematch would almost certainly earn Linares more money than a fight with Zlaticanin. And money talks. …

The ShoBox broadcast on Friday was entertaining.  The most impressive fighter on the card, which took place in Miami, Oklahoma, was Ivan Golub (13-0, 11 KOs). The Brookyn-based Ukrainian overwhelmed and then took out the capable James Stevenson (23-3, 16 KOs) in the third round of a junior welterweight fight. Golub has a potent blend of skills and power.

The most exciting fighter on the card – even though he didn’t score a knockout – might’ve been Ivan Baranchyk, who easily outpointed ridiculously tough Zhimin Wang in a 10-round 140-pound fight. Baranchyk (12-0, 10 KOs) couldn’t take out Wang (7-1, 3 KOs) but everyone loves a fighter who throws bomb after bomb after bomb, as Baranchyk does.

Trey Lippe Morrison, the son of Tommy Morrison, also made a statement. The raw heavyweight (12-0, 12 KOs) took out Ed Latimore (13-1, 7 KOs) in the first round. I doubt Morrison will go far because of his late start but his journey should be interesting. And, in the main event, light heavyweight contender Radivoje Kalajdzic, stopped Travis Peterkin (16-1-1, 7 KOs) in five rounds. Kalajdzic (22-1, 15 KOs) looked sharp but it also appeared that Peterkin wasn’t mentally prepared for the fight.