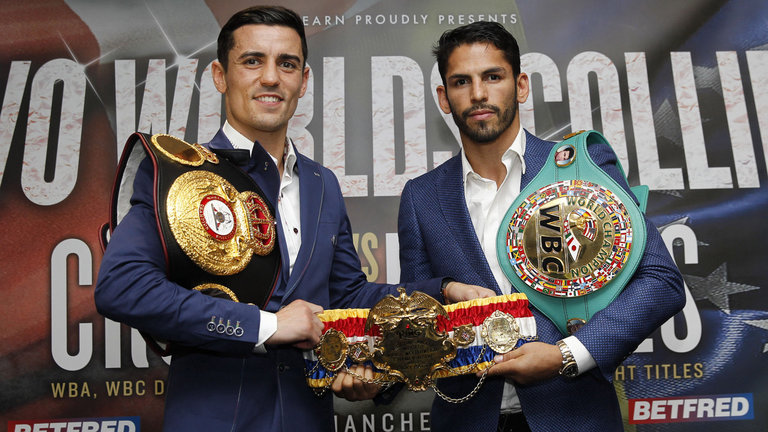 On Saturday evening, Jorge Linares and Anthony Crolla battle for lightweight supremacy. The two will contest the Brit’s WBA belt, the WBC Diamond title and the vacant RING magazine championship, at the Manchester Arena in Manchester, England on Sky Sports at 7:30 p.m. GMT.

“It’s not every fighter that can fight for the RING belt, that can fight for all these belts. A lot of the champions don’t want to face each other,” Linares told RingTV.com through Golden Boy Promotions matchmaker Robert Diaz on Thursday. “I’m grateful for the opportunity, to my promoters, Golden Boy, Teiken (Promotions) and, also, to the people here in England and (Group Managing Director of Matchroom Boxing) Eddie Hearn for the opportunity to fight on the top level for all the belts.”

The precociously talented Venezuelan-born fighter was spotted by Teiken Promotions President Mr. Akihiko Honda and taken to Japan in his late teens.

In the nine years since, the wonderfully gifted Linares has, at times, flattered to deceive; however, to his credit, he’s gone on to become a three-division world titlist.

At times, he’s fallen apart, while ahead in fights and has been stopped. Sixteen months ago, that looked like it would happen again, when he was dropped in the fifth round against Kevin Mitchell in a title defense in London. Linares battled back and, despite being behind on two of the cards, mounted a late rally to stop the Londoner in front of his home fans. It was the sort of gumption he’d not shown previously. He feels recovering from that adversity is important.

“Not only the defense against Kevin Mitchell but then, after I went to Venezuela and I was able to defend for the first time in my home country, in front of my people and now, I’m ready. I’m better. I can tell you this: I’m very well prepared. I’m better prepared than for the Kevin Mitchell fight. You’ll see on Saturday night. I’m going to steal the show and bring all the belts home.”

Since the Mitchell win, Linares enjoyed a homecoming – in front of 18,000 fans – but has been on the shelf for the past 11 months with a hand injury that occurred in sparring for a different fight earlier this year.

“My hands are 100 percent,” he said. “We took a little precaution (in preparation), instead of working with 14-ounce gloves (in sparring), we went to 16-ounce gloves. Obviously, we went down lower as the fight got closer.

“Inactivity, in the ring in an actual fight, yes, but not inactive in the gym. I’ve been training, even after I hurt my hand and had surgery. I was still in the gym maintaining, so there’s not going to be rust or a timing issue. I’ve been active in the gym preparing and I’m very well-prepared for this fight.”

All week, both fighters have engaged in good banter and have been respectful of each other’s abilities.

“(Crolla)’s a tremendous warrior. He has tremendous heart. He’s prepared 100 percent,” said Linares. “I think I am facing the best lightweight in the division and I think the combination of both us – we’re clean fighters. We’re both coming to win. We’re both going to give it 100 percent. We’re going to steal the show and provide the fans with a beautiful fight.

“I’m very happy. The weather’s great. The weather’s comfortable for me. The people are treating me well. I’ve had no inconveniences. I’m just ready. I’m anxious to make weight and we’re ready to give a great performance on Saturday night and take the win.

“(Crolla’s) strengths are he tries to wear the opponent down, his strength conditioning. He likes to go to the body, wear his opponent down and take advantage once his opponent is worn out. He outworks them.

“We think he won’t be able to deal with my speed, my footwork. I can go in the short distance like he likes. I can go toe-to-toe but I’ve got to be more intelligent and take advantage of what I have over him and that’s what I’m going to do.”

Diaz, who has worked with Linares for several years, likes what he sees from his company’s fighter, “I truly and honestly believe, Saturday night, we’re going to see the best Jorge Linares we’ve ever seen.”

Having fought in England and other foreign environs, previously, along with his homecoming, he has experienced both sides of fighting with the fan support as well as being Public Enemy No. 1.

He can see advantages to both, though ultimately isn’t unduly bothered either way.

“They are two very different circumstances,” he explained. “One in favor, fighting at home, there’s a lot of pressure, knowing what the people expected out of me. That’s a lot of pressure but we knew how to handle it. We’ve fought all over the world, in Japan, Venezuela, England, Mexico and the United States. I’m used to it. I’m 31. I’m psychologically and mentally prepared for what can happen, Saturday night, with the public on and it doesn’t phase me. I’m ready for it. I’m ready to face that and Crolla.”

Having beaten Mitchell before Crolla leveled things up with a win over Linares’ countryman Ismael Barroso, Linares is acutely aware that things are evenly poised and this is the decider.